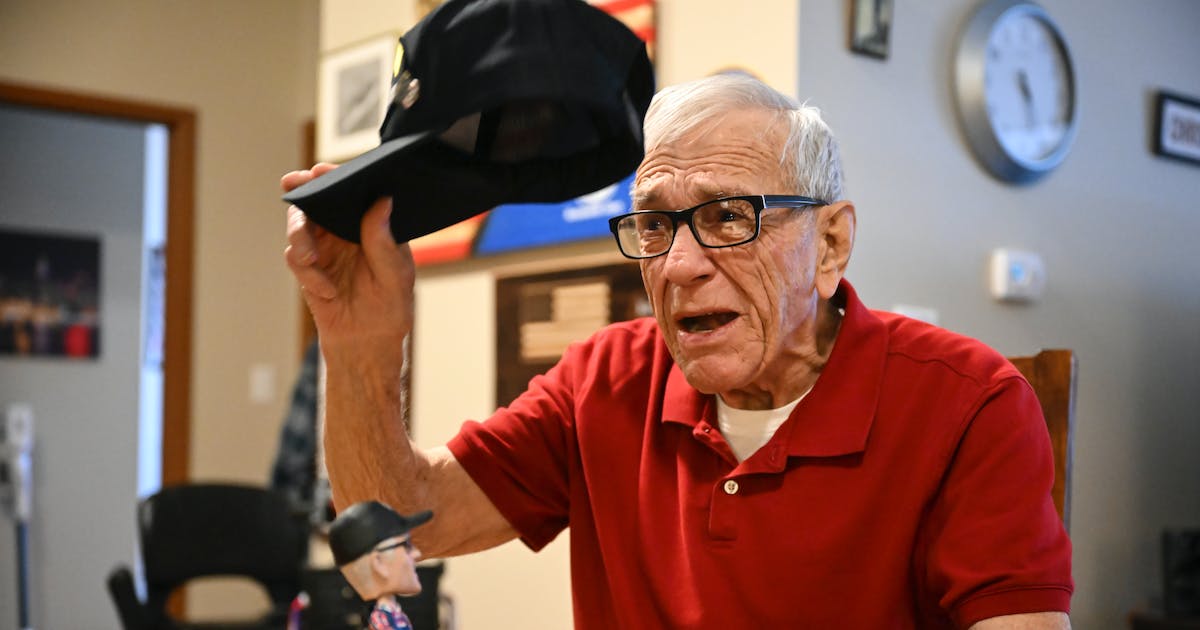 Amanda Kline had heard of Kenny Jary. Of course, she had; if you live in Mahtomedi, how could you not have heard of the man known as “Patriotic Kenny”?

Kenny is something of a mascot for this town nestled amid St. Paul’s northeastern suburbs. He raced his mobility scooter all over town, bringing smiles and optimism to whomever he encountered.

One day last spring, Amanda was walking in Mahtomedi with a fellow teacher at St. Paul’s Metro Deaf School. Amanda is hearing; her friend is deaf. They spotted an old man in an American-flag festooned mobility scooter. Amanda piped up: “Are you Kenny?”

What followed was an unlikely tale of friendship and fame rooted in simple joy and a sunny disposition — all serving as a tonic in these troubling times.

Then something bad happened. Kenny’s scooter broke. Buying a new one wasn’t easy for a man who’d spent his life valuing love and friendship over money.

“I never had nothing,” Kenny said. “But just ’cause you ain’t got nothing doesn’t mean you can’t be happy, can’t go and talk to people, enjoy people and love people.”

After graduating from Monroe High School in St. Paul in 1960, he’d served four years in the Navy as a helicopter re-fueler, including when his ship, the USS Okinawa, sailed the Caribbean during the Cuban Missile Crisis. He worked construction, then he got a job at the old Ford assembly plant in Highland Park, where he worked for 32 years.

By fall 2021, Kenny was living on a fixed income at an independent senior-living complex in Mahtomedi. His chronic obstructive pulmonary disease means he can’t walk far. His children visit, but they have their own lives. Kenny drives in summer, but the scooter is his primary mode of transportation, his connection to the world — to freedom. He took it to the coffee shop with Jerry. He took it to Veterans Memorial Park in North St. Paul with Jerry. He took it to Walmart with Jerry.

“If I’m his assistant and do everything for him or with him, I don’t mind,” Jerry signed. “He’s more like a brother than anything.”

When his scooter broke, Kenny fell into depression. Friends texted and called; alone in his apartment, Kenny didn’t respond. COVID was isolating; this was COVID all over again.

They made a TikTok about his broken scooter.

Nearly 2 million people viewed it. They made another; nearly a million viewed it. Their next TikTok came with a surprise; in 24 hours, Kenny’s TikTok followers had donated $5,000 to a GoFundMe account for a new scooter. Kenny bawled at the news.

Donations kept flowing in, and the GoFundMe grew to $110,000. They started purchasing mobility scooters for veterans. They set up a second GoFundMe solely for other veterans; that has raised $51,000.

Kenny and Amanda traveled to New York City for the “Today” show; Kenny wore Carhartt bib overalls, which he loves because of all the pockets. They have raised enough for more than 50 mobility scooters, and Kenny was recently named a GoFundMe Hero.

On a recent spring evening, Kenny sat at his kitchen table with Amanda, Jenny and Jerry. They recorded a TikTok — Amanda surprised him with a custom-made bobblehead of Kenny on his scooter. Kenny talked about the odd sensation of a regular working man finding fame at age 80.

“Sure, I got all this glory, this and that,” he said. “All these nice people that gave to me.” He was crying. “But these three — that’s the most important part,” he said. “Thank God I met these three. Otherwise I wouldn’t be around to see this day.”

For Amanda, the point of their TikTok account is sharing his joy. Kenny agrees.

“That’s the trouble with America,” Kenny said. “We gotta have love! We got to. That’s the way all people should be. When I walk around, at a coffee shop, a store, and I see people smiling, they come up to me and say hi — to me, that’s America. That’s America.”