A better Lake Street? A daring hope for riot-torn corridor 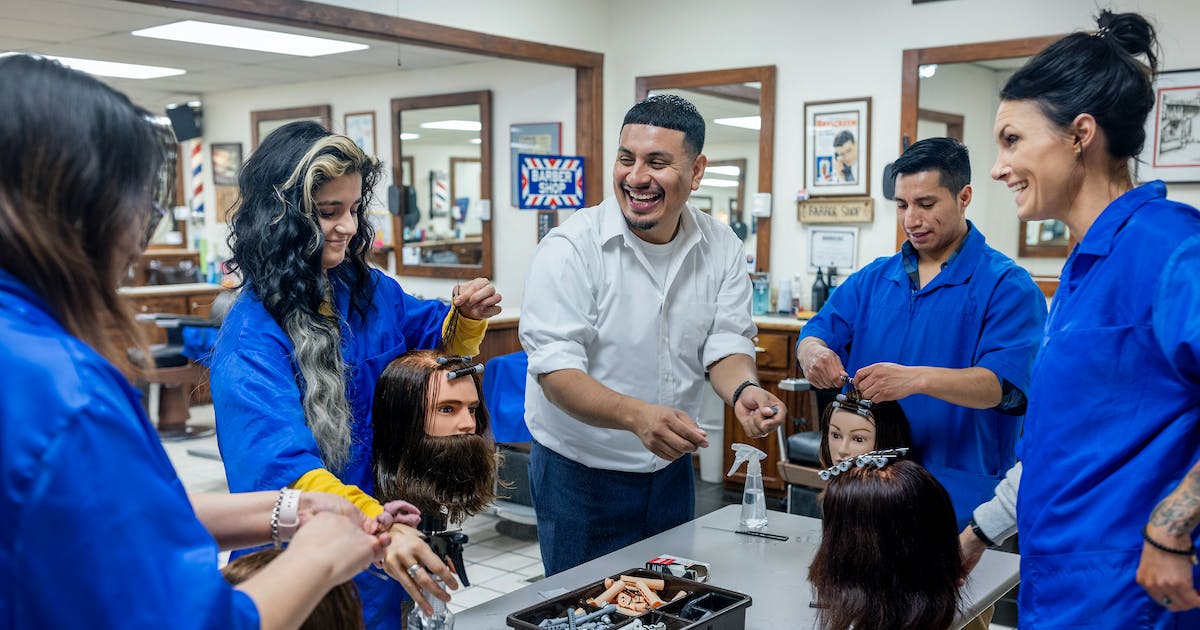 In May 2020, the intersection stood in the path of riots that engulfed 5 miles of south Minneapolis after the murder of George Floyd. Law enforcement officers lost control of the city, resulting in an estimated $500 million in damage – more than 60% uninsured, according to the Lake Street Council.

Afterward, neighborhood leaders worried developers would swoop in on desperate property owners and displace small businesses from one of the last affordable commercial hubs to run a shop. Or worse, that the corridor would become a wasteland, its cultural identity erased.

It would be enough to rebuild what had been lost. Minneapolis will waive the rules of its density-increasing 2040 comprehensive plan to help building owners do just that, said Erik Hansen, the city’s director of Economic Policy and Development.

Yet the intersection of Lake and Bloomington, where solar arrays crown rooftops and graffiti-deterring murals span almost every building, offers a glimpse of another potential future — that of a Lake Street rebuilt better than it was before.

It’s a daring hope that lies at the end of a long path to recovery.

Many parts of the Lake Street corridor still show various stages of ruin. Daunting financial gaps loom. While DFL legislators requested $300 million from the state in 2020, $18 million will finally start flowing out to Minneapolis businesses this summer.

Despite the Minnesota Legislature’s protracted debate over state aid and FEMA’s outright denial of disaster assistance, recovery has progressed at a steadfast pace thanks to grassroots fundraising.

“Lake Street somewhat hangs in the balance right now, and I could see it going either way,” said Bill Graves of the Graves Foundation, based in the Midtown Exchange.

Recent land sales do not indicate the market here is weak, he said. Transportation improvements — I-35W access and bus rapid transit — continue to appreciate its value.

Riot damage happened in a perforated pattern, and infill development on narrow lots is more difficult than building on a larger footprint. If outside developers without a care for Lake Street’s character found it an opportunity ripe for exploitation, it would have happened by now, he said.

Many initial fears have not come to pass. Pits of rubble are now fields ready for construction. Lake Street’s corporate anchors, including Target and Cub Foods, stayed. Vacancies are low. Most small-business owners have reopened, though many deferred growth and took out large personal loans.

Lake Street Council President Allison Sharkey said she’s not concerned about long-term blight. “But there’s a perception [of danger] now,” she said. “Every time there’s a new story we’re trying to get out about progress being made, they also bring up all the images of burning buildings. … That’s a big challenge.”

Unrest two years ago swallowed the block of 27th Avenue where LV’s Barbershop was located. Neighboring Minnehaha Liquors burned to the ground. A broken door and windows forced Lamberto Vergara to board up his shop.

His barbers hurt for work. He had bills to pay. Determined to do something, he rented a second location in northeast Minneapolis on personal credit.

Still Vergara yearned for Lake Street; its energy reminded him of Brooklyn, where he grew up. But because he rented his building, he had little say over repairs. With the help of the city’s Commercial Property Development Fund, Lake Street Council and the Metropolitan Consortium of Community Developers, he bought his own.

He now operates two LV’s Barbershop locations, a barber supply store and his building at 3615 E. Lake St. That his community helped him to not only reopen but to grow amazes Vergara.

“I see a bigger future for Lake Street, and I’m just happy to be part of it,” he said.

Prior to 2020, Lake Street’s many Latino small-business owners typically did not own the buildings where they worked. Many hung on by a thread through the pandemic and were underinsured at the time of the riots.

The community was deeply hurt by the apparent contradiction of a so-called uprising punching down on immigrants, said Realtor Juno Jimenez. But in time he learned to respect the pain that came of racial injustice and divorce it from the destruction.

“We realized that by not doing anything, by just sitting there and hoping for the government, hoping for anyone to come and help us, wasn’t going to be the solution,” he said. “We had to unite the Latino community in a way that we have never seen before.”

Olivia Rodriguez of Car Audio El Rey sells stereos at Lake Street and South 5th Avenue. In 2020 looters laid waste to her shop. She didn’t know how she would start again, but she did.

A year later, a Brooklyn Center officer fatally shot Daunte Wright, reigniting tensions. Security footage at Car Audio El Rey showed a dozen armed men carrying speakers away. Rodriguez’s husband attempted to intervene. The men chased him to his car and shot it as he fled, she said, estimating losses of $250,000.

When Rodriguez’s insurance company denied claims for vandalism, BMO Harris Bank approved her for a line of credit under a program for Black and Latino business owners. A Lake Street Council grant helped her buy a single-story building at 513 E. Lake St.

Standing between its naked walls, Rodriguez smiled and said she can visualize the potential. Not only will it house her business, there is also space to rent.

“She wants to hold on to the fact that while everything was going on, there were a lot of community leaders that didn’t give up on them,” Saul Hernandez, manager of Lake Street’s BMO branch, said as he translated for Rodriguez.

The Coliseum building at 2700 E. Lake St. was once a department store and dance hall serving Scandinavian immigrants in the early 1900s. It now sits frozen with broken windows and a façade of scorched brick.

This section of Lake Street was hit hard and looks it. Ruins are interspersed with empty lots where the former Addis Ababa Ethiopian banquet hall stood, and where Gandhi Mahal’s Bangladeshi restaurant and the Migizi nonprofit for Indigenous youth advancement were burned irreparably.

Nonprofit developer Seward Redesign was determined to save the Coliseum. It bought the building last spring and had it inducted in the National Register of Historic Places in hopes of safeguarding it for co-development with three Black business owners — a $26 million project to begin in August.

“This project is emblematic of what we’re trying to see happen across the corridor,” said Taylor Smrikárova, Redesign’s director of property development. “We are not trying to solve institutional racism with this building, but the process of rebuilding can be part of the healing.”

Redesign’s partners include Chris Montana of Du Nord, the only Black-owned distillery in America. After the unrest, Montana gave up space in his distillery building for Migizi’s students to continue their summer programming. His cocktail room went into hibernation.

Hundreds of volunteers helped Du Nord become an emergency food bank. Flush with GoFundMe donations, Montana launched a foundation to give out $15,000 grants to more than 70 businesses. The Coliseum is where he’ll resurrect his cocktail room.

Montana’s co-developers, architect Alicia Belton and HR consultant Janice Downing, intend to create a co-operative office space for Black creatives. Neither has owned their own commercial buildings before. Both will be moving onto Lake Street for the first time from northeast Minneapolis.

“There’s an opportunity to do things differently, to make sure that the community that is there is benefiting from what happens,” Belton said.

Other nonprofit projects include Project for Pride in Living’s 110-unit affordable housing complex at Lake and Nicollet and commercial space the Neighborhood Development Center will create from a riot-damaged lot at the corner of Chicago and Lake.

“Right after the riots and the destruction that took place, there was a lot of fear of investors coming in, acquiring property and transforming that property into more market [rate] developments,” said Eduardo Barrera, NDC’s manager of real estate development. “These nonprofit groups, including NDC, reacted quickly to try to avoid the gentrification issue, to try to open up opportunities for entrepreneurship.”

Mortenson construction company has mapped the progress of façade repairs across Lake Street over the past two years. Block by block, construction teams re-deploying this month will push east and west from the intersection of Lake and Bloomington to continue restoration.

After the unrest, Mortenson workers fanned across the corridor to sweep glass, install new signage and impact-resistant windows and doors. The company’s risk managers helped small businesses unearth their insurance policies and negotiate claims. They contracted women and minority-owned firms to perform as much of the work as possible.

“The kind of intrepid commitment that these business owners have to their community because they’re like, ‘Our community needs us. We’re not going anywhere…’ It’s totally inspiring,” Chair David Mortenson said.

Mortenson created an initial damage assessment for the corridor and urged local CEOs to chip in. . The Minneapolis Foundation established the Restore Rebuild Reimagine Fund to manage donations for unrest recovery across the Twin Cities.

Last year the Minnesota Legislature allocated $80 million for the statewide Main Street Economic Revitalization Program, which requires applicants to raise matching dollars at a two-to-one ratio . About $18 million was set aside for Minneapolis businesses in the first round of funding.

So far the foundation, in partnership with LISC Twin Cities and Propel Nonprofits, has received 22 proposals requesting $13.5 million, including 13 projects along Lake Street.The first Main Street grants will be released this summer.

On Tuesday, the state announced a second round of Main Street funding totaling $16.75 million. A yet-undetermined figure, after administration fees and other costs, will also go to small-business recovery in Minneapolis, Brooklyn Center and Brooklyn Park.

“I’m completely confident that this street is going to be dramatically better,” said R.T. Rybak, the former mayor who is now president of the Minneapolis Foundation. “Not without a massive amount of pain and a whole lot of effort, but the story that’s going to come out of this period of time is going to be about … so many people putting aside their individual agendas, figuring out some way to have an unprecedented coalition to rebuild.”