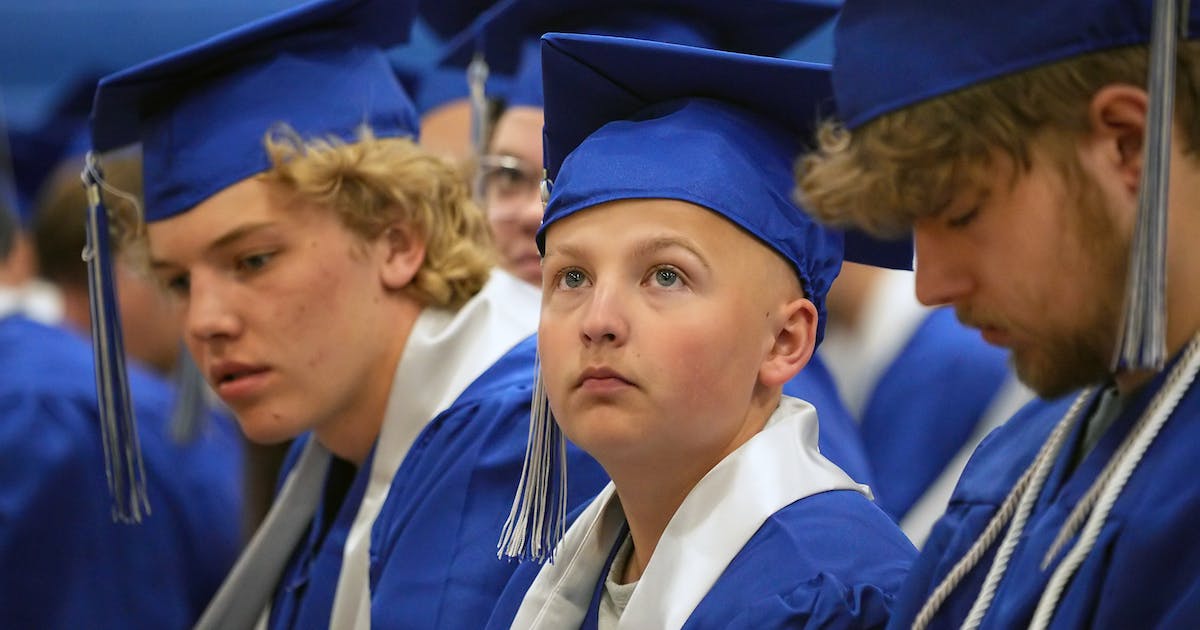 KASSON, MINN. — Statistically speaking, Wyatt Deno shouldn’t have been goofing off with his friends Wednesday at his high school graduation rehearsal. He shouldn’t have walked across the stage, all business, firmly shook his teacher’s hand and practiced receiving a diploma.

He shouldn’t be ready to attend Minnesota State University, Mankato to become a social worker this fall.

Deno was diagnosed with a rare, malignant type of brain tumor as a second-grader — the kind most children don’t survive. At one point, Mayo Clinic doctors told his parents, Justin and Stacy, that he had less than six months to live.

But Deno survived, and he became a beacon of hope for his family and pretty much everyone he meets. Now 18, he’ll graduate from Kasson-Mantorville High School on Friday night more than a decade after beating cancer.

“I just like sharing my story and giving people positive thoughts,” he said. “I like being a positive person. It’s just who I am.”

At 5 feet tall, Deno can seem a little unassuming. He gives off the impression his bald head is more of a fashion choice than the byproduct of the radiation therapy he underwent at 7 years old. Yet his family, friends and teachers say he is a powerhouse of positivity.

“He’s one of the most outgoing, friendly, positive people I’ve ever met,” said Kasson-Mantorville High School Principal Trent Langemo. “You’d be hard-pressed not to interact with Wyatt and come away with a smile.”

Deno’s family first suspected something was wrong when he fainted from heat stroke during summer camp in 2011, when he was 7.

“I can’t remember much of it. I was just playing and then it happened,” Deno said.

Then came the awful headaches, the kind that would wake him in the middle of the night, hurting so bad he would throw up. The headaches wouldn’t stop, so a CT scan was scheduled shortly before Thanksgiving in 2011.

“That Sunday night he woke up, had a terrible one and he was just like, ‘I can’t do this anymore,'” Stacy Deno said.

He was diagnosed with a primitive neuroectodermal tumor (PNET) – a catch-all term to describe particularly rare, malignant types of brain tumors. About 1,000 people in the United States are living with this tumor, which most often affects young children.

“The cure rate is quite low, because usually it’s very aggressive, especially in the little ones,” said Dr. Jonathan Schwartz, a pediatric neuro-oncologist at Mayo Clinic Children’s Center.

Deno’s tumor was particularly aggravating. Doctors couldn’t remove all of it in surgery, and the tumor affected his thalamus – a key part of the brain that helps relay sensory information. The average patient with that many issues has more than a 70% chance of dying, Schwartz said.

Yet Deno responded to chemotherapy and radiation. It took nine months for him to enter remission as his family watched and prayed. He’s gone back over the years for checkups, but it’s been more than a decade since there was any sign of a tumor, which Schwartz said likely means he’s cured.

“There were so many emotions, obstacles, issues … but ultimately, miracles,” said his mom.

Deno’s battles weren’t quite over. He missed almost all of second grade, but he was able to catch up thanks to tutoring by his teacher. He loved amateur wrestling ever since he started in preschool, but he couldn’t join the team again.

And he still dealt with the occasional issues — short-term memory loss, trouble concentrating and a stroke when he was in eighth grade. True to form, he missed two days of school and not much changed in his life except for the aspirin he takes daily.

He tried to join the high school wrestling team in ninth grade but couldn’t deal with the stress it placed on his head and neck. So he became the team manager.

He started going to outdoor retreats and camps for kids with cancer, mostly as a counselor, so he could cheer up other children who faced their own struggles. He continues to enjoy the outdoors, whether hunting or hanging out with his family at their cabin on West Jefferson Lake near Elysian, Minn.

Deno isn’t quite as worked up as his mother about graduating. Stacy Deno said she still can remember the doctor writing her son’s diagnosis on a white board, wiping it off with his sleeve and telling her, “Do. Not. Google this.”

Yet she’s both excited and afraid for Wyatt, the oldest of three, to graduate and attend university. While she’s proud to watch her boy become a man, she’s still nervous about how Wyatt will adapt to college life, just like any other mom.

“There’s been multiple occasions where I’ve been emotional, just realizing this is one chapter that’s done,” she said.

Wyatt’s focused on a new goal, however. He loves working with children and hopes to become a child life specialist, a kind of social worker who helps children and families navigate trauma and treatment, at Mayo Clinic. Just like the specialists who helped him throughout his medical journey.

He’s already gaining experience: He worked as a teacher’s aide in his old second-grade classroom, and he continues to work at a day care just across the street from the high school, cracking puns and working up a sweat playing with the children under his care.

“I’m like the other kid that likes to go wear them out,” he said with a laugh.

HIs experiences will serve him well.

“There’s nobody who understands better what they’re going through than someone who’s gone through it himself,” said Schwartz, who has treated Wyatt over the past three years.

For Deno, it’s just another mission to undertake.

“It’s been a long road and I’m ready for the next thing.”