After record-setting trip in space, Vande Hei returns to Earth 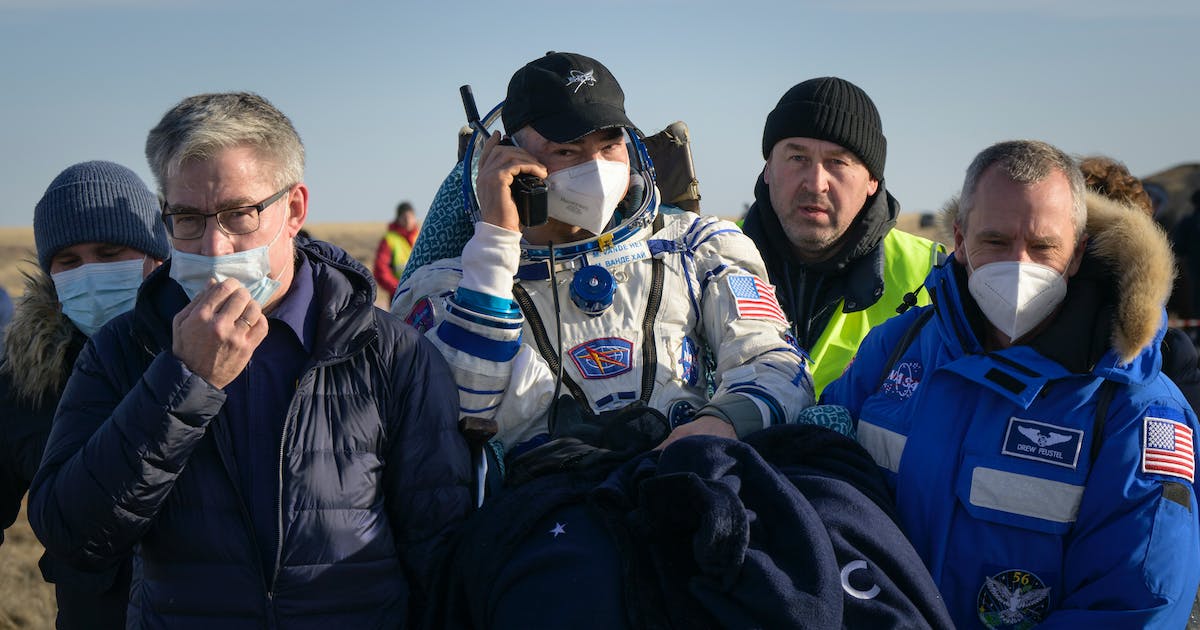 More than three hours after the Soyuz capsule undocked from the International Space Station on Wednesday, the spacecraft appeared in Earth’s atmosphere — the striped parachute backlit by the bright blue sky over grasslands in Kazakhstan.

After the landing, crews quickly worked to pull the three astronauts out of the capsule and carry them to reclining chairs.

“Beautiful out here,” said Mark Vande Hei, a graduate of Minnesota’s Benilde-St. Margaret’s and St. John’s University, before he slid on sunglasses and a baseball cap.

A small NASA team of doctors was on hand for the touchdown and planned to return immediately to Houston with the 55-year-old astronaut, much to the relief of Vande Hei’s father, Tom Vande Hei, who watched his son’s return Wednesday morning.

“He looked good,” said Tom Vande Hei, who lives in Chanhassen with his wife, Mary.

Neither he nor Mary, Tom Vande Hei said, got much sleep Tuesday night. “It’s been a stressful time.”

Despite escalating tensions between the U.S. and Russia and a threat from the head of Russia’s space program to leave Vande Hei stranded in space, his return followed customary procedures.

Even before Russia’s Feb. 24 invasion of Ukraine, Vande Hei said he was avoiding the subject with his two Russian crewmates. Despite getting along “fantastically … I’m not sure we really want to go there,” he said.

It was the first taste of gravity for Vande Hei and Pyotr Dubrov since their Soyuz launch on April 9 last year. Anton Shkaplerov joined them at the orbiting lab in October, escorting a Russian film crew up for a brief stay. To accommodate that visit, Vande Hei and Dubrov doubled the length of their stay.

Before departing the space station, Shkaplerov embraced his fellow astronauts as “my space brothers.”

“People have problem on Earth. On orbit … we are one crew,” Shkaplerov said in a live NASA TV broadcast Tuesday.

“I’ve had an indoor job 24-7 for almost a year so I am looking forward to being outside no matter what kind of weather,” Vande Hei said in a recent series of NASA videos. As for food, he’s looking forward to making a cup of coffee for himself and his wife, Julie, and digging into guacamole and chips.

St. John’s and BSM welcomed him back to Earth on social media Wednesday.

Tom and Mary Vande Hei plan to visit their son in Houston in early April, more than two years since they last saw him due to the pandemic and his nearly 12 months in space.