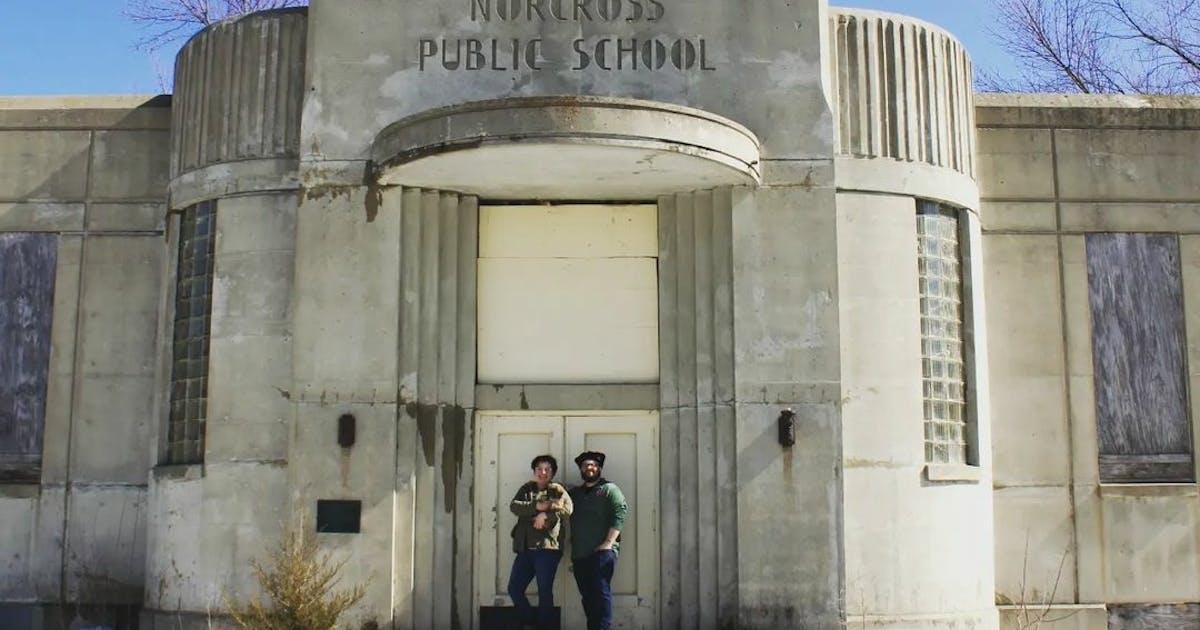 Kaycee Kramer will be the first to admit that certain details on the real estate listing for her dream home meant the property was not for everyone.

“Located in a petite community in rural western MN.” “In need of a complete restoration.” “Never been lived in.” “Roof does leak.” “Basement takes in seasonal water, and requires sump pump.”

Kramer, 33, was knocked down by COVID one day this winter when her sister sent her a Facebook post advertising the spot in Norcross, a Grant County town of 63 people. Her sister’s note was, Kramer thinks, a joke. Who in their right mind would live in a concrete Art Deco two-room schoolhouse built in 1938 by the Works Progress Administration, occupied by elementary-age students for decades, abandoned in the 1970s and empty ever since?

But Kramer’s reaction was serious: “Holy cow, I need that now!”

Kramer said she’s never wanted to live in a normal house, so she and her husband, Mark, bought the building a couple of months ago for $35,000, significantly less than the $48,000 list price.

“It needs so much work — so much work,” said Kramer, who lives in the Twin Cities. “It’s going to cost many, many times that amount of money to fix it up. But it was kind of one of those things where we saw it and fell in love, and there was no turning back.”

Inside the front door, a short flight of concrete stairs leads to the main level. There are two main rooms — one that used to house first through third grades, the other fourth through sixth — and two bathrooms with curved glass block windows. A basement used to house a gym, cafeteria and auditorium, though it’s now more like an abandoned garage.

Carrie (Wold) Pilgram went to Norcross Public School from fourth through sixth grade before heading to nearby Herman for high school. With eight students, her fourth-grade class was especially big for the school; there were five fifth-graders, and three sixth-graders, all taught in the same room by the strict Mrs. Noma Ogg. Pilgram loved music class, and she recalls a lot of square dancing.

Pilgram, who now lives near South Haven in Wright County, is thrilled at Kramer’s plans for the old school, especially since Kramer aims to decorate the entrance with mementoes from the school’s history.

“I’d rather have somebody revitalize the building than have it be just a shell and look so sad,” Pilgram said. “It’s going to make it happy again. There’s not many left out there, but it might be a place for people to come back and reflect, or to gather again.”

Foundation work will be the most expensive and time-consuming; a safe foundation is key, especially if they’re going to install a new roof. Kramer is going to apply for a rehab loan to help pay for inside construction.

When it’s done, she hopes it’s again a gathering place where she can serve big meals to groups of people.

“It needs everything: electricity, plumbing — there’s not even a sewage system!” she said. “But we don’t care if it takes us the rest of our lives. My whole life, I’ve been looking for that perfect place I can make into my house. When I was little, I’d catalog places for sale when we’d drive past. We saw this, and that’s the one. We have to do it.”