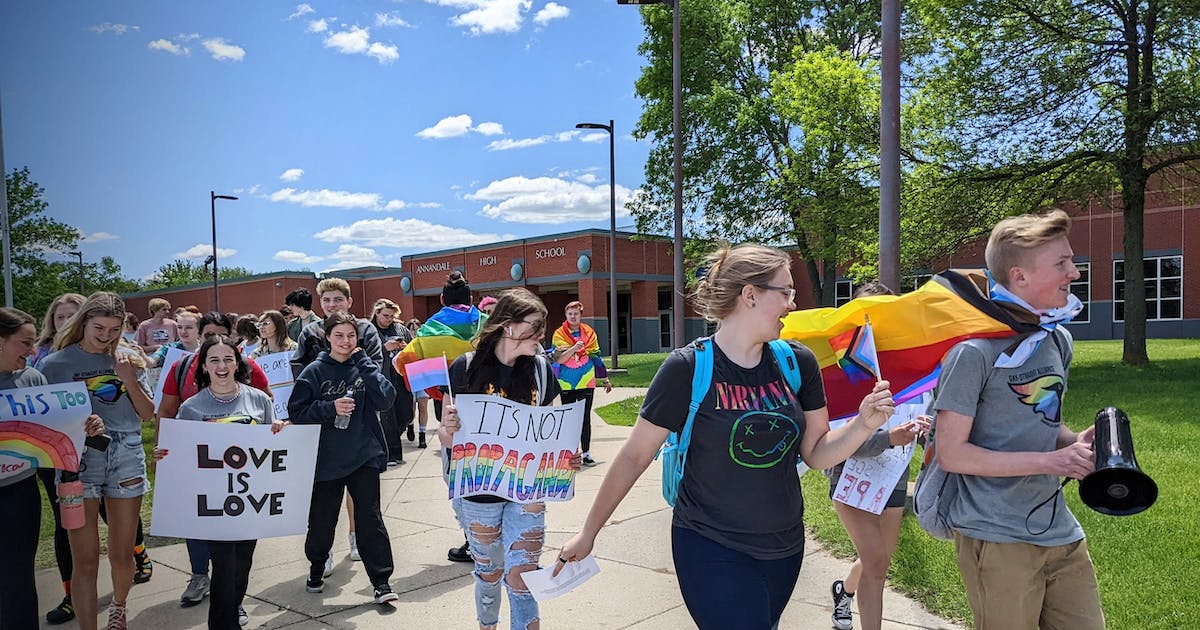 While carrying colorful posters and chanting, “Queer rights, human rights” and “Love is love,” the students marched from the high school to the district offices, where former students and community members joined for a rally in support of the “safe space” signs and the students themselves.

“It just really hurts. They’re trying to shun us and saying we’re too political to be handled in a school,” said 15-year-old Landon Nelson, who helped organize the walkout. “[Administrators] said multiple times they are worried that they can get into a lawsuit. It just feels like they don’t want to fight for us. They’d rather just fight against us.”

Nelson is part of the school’s Gay-Straight Alliance club, which is in its first year. Earlier this school year, the club designed “safe space” signs with a rainbow behind the school’s cardinal logo to show LGBTQ+ students they are welcome. Staff voluntarily put up the signs in their classrooms to show students they were someone students could report harassment or bullying to if needed.

After administrators received complaints about the signs, Superintendent Tim Prom sent an e-mail to staff warning “when it comes to what we post in our buildings and what we wear, case law has shown that we, as public school staff, must be very careful. … According to legal counsel, staff cannot post or wear anything that is deemed political in nature or that would cause a disruption to the learning environment for our students.”

“We live in divisive times, more divisive than ever before,” the letter reads. “School districts are being put at the center of many contentious and political topics.”

Prom attended the rally and said the district supports the students’ rights to speak and gather peacefully.

“I so support these kids,” he said, noting the “safe space” signs have not been removed, although district leaders have been discussing what he calls a more inclusive message for signage in classrooms such as “all are welcome.”

Prom also emphasized the administrators take harassment complaints “very seriously and act promptly to correct any misbehavior” and that the district is working with a consulting firm to gain more education and training on equity.

Talia Stumpf, who graduated from Annandale in 2020, attended the rally to support the students. She said she came out last year — and would not have considered it when she was still in high school.

“It was all hushed, quiet. You didn’t talk about it. Then you go to college and find your people there,” Stumpf said. “I think it’s sad. It’s the first week of Pride Month and here we are.”

Nelson’s mother Samantha Nelson and grandmother Jodi Tvedt also attended the rally to show Landon he is supported at home — even if he doesn’t feel supported at school.

“Unfortunately, we live in a small community and I feel like there are a lot of people who don’t accept anyone who is different,” Samantha Nelson said.

Tvedt said she believes all children deserve a place where they feel safe. “It seems wrong they have to fight for it,” she said.

At the rally, several students shared personal experiences with bullying and read a handful of anonymous statements from teachers about the importance of the “safe space” signs. The statements were anonymous so teachers wouldn’t face repercussions, Nelson said.

But to close out the rally, Nelson read a statement from high school teacher Josh Dickinson.

“Today I was asked for a favor. I was asked to be supportive. I was asked to make a statement. I was asked to be anonymous. Anonymously supportive? That is something I cannot do,” Nelson read. “We need honest, loud and unrestricted support for the traditionally unsupported. Today, we need to let our students know that gay, straight, Black, white, he, him, them or they — you have a voice in Annandale schools and you are heard.”