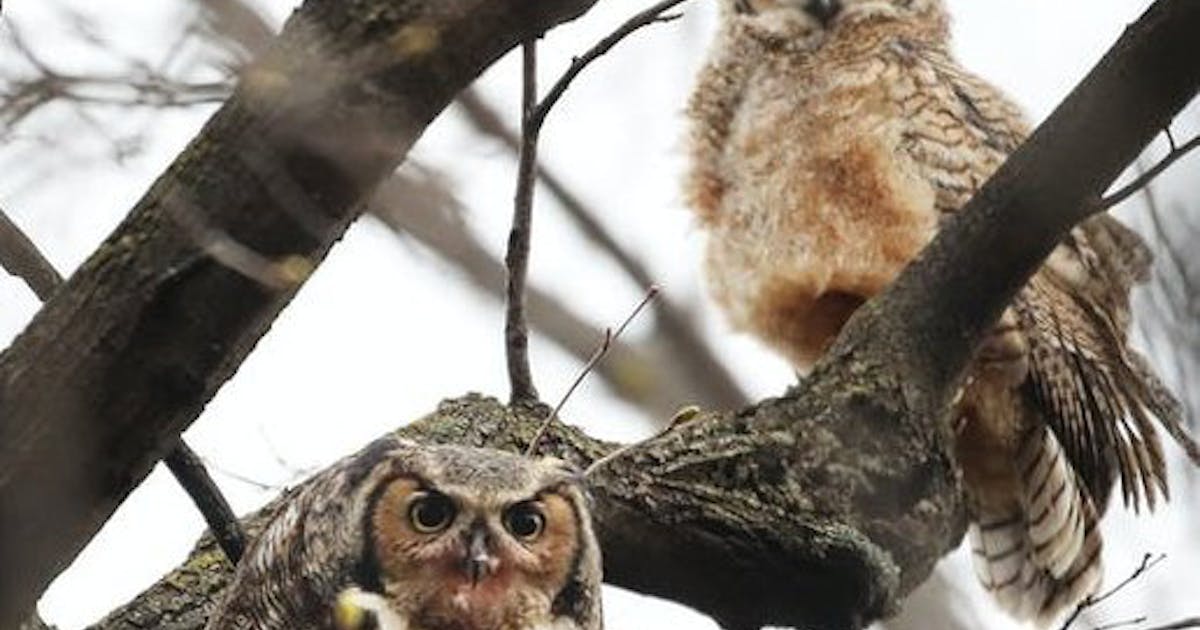 One great horned owl, stricken by a deadly disease, is still alive. The adult female has started to eat, behave and sound close to normal at the University of Minnesota’s Raptor Center in St. Paul.

Still in quarantine, she is the only known wild raptor in Minnesota to recover from a particularly vicious outbreak of the avian flu, one of the worst in living memory.

“We are just very, very excited that one owl was able to survive this virus,” said Victoria Hall, executive director.

Her recovery is a rare sign of hope for what is happening in the wild as the strain of influenza has proven nearly always fatal to owls, eagles, hawks and other raptors. Originating in Europe, the bird flu outbreak is unprecedented in size, scope and harm done to wild birds as it spreads in the United States. The virus poses little threat to humans.

The Raptor Center, alone, has confirmed 12 bald eagles and three red-tailed hawks died of the virus. It killed an entire nesting family of great horned owls that had become something of local celebrities living near Lake Nokomis in Minneapolis.

“It always gets your attention when you lose a breeding pair like that,” Hall said. “It makes you question the impact it has on the population.”

Most raptors with the virus show clear signs of suffering: constant seizures, screeches of discomfort and trouble sitting up or moving. The owl that survived, however, showed much milder symptoms, Hall said.

She was clearly ill, wouldn’t fly, and was able to picked up off the ground by hand, but never had seizures or more severe symptoms. It may be that she was never exposed to a high dose of the virus, or that something in her genetics made her strong enough to fight it off, Hall said.

Some form of the virus, usually a less contagious strain, is almost always present in waterfowl. The virus evolved with ducks and geese and rarely harms them or spreads to other animals. But every so often a particularly contagious and damaging strain emerges, said Michelle Carstensen, wildlife health program supervisor for the Minnesota Department of Natural Resources (DNR).

It spreads between different populations of ducks and geese as they migrate, traveling from Europe to Nova Scotia to the Caribbean and Gulf of Mexico to the Upper Midwest. It spreads to the owls, hawks and eagles that eat them. The virus is most potent in the spring, when the cool and wet weather allows it to survive in feces and carcasses. Scavengers, or even the soles of shoes, take it from there to chicken coops and turkey farms. Outbreaks typically subside in the summer, when it is warm and dry and the virus can’t survive outside of a host nearly as long, Carstensen said.

It’s impossible to quantify the toll on wildlife populations, she said.

“It’s a hard question to ask when we’re still in the middle of it,” Carstensen said. “We know it’s more lethal than the outbreak in 2015, but it’s early and we just don’t know population level effects.”

There have been confirmed die-offs in 28 states, which include cases of 5 birds found dead together to several hundred. It has been particularly hard on bald eagles and owls, and unusually deadly to snow geese, Carstensen said.

Over the past month it has spread to about 40 livestock operations in Minnesota, killing a total of about 2 million domestic birds, either directly or from depopulation once a flock was infected.

The state and federal government are working to make those farmers whole, Gov. Tim Walz said Tuesday in Willmar at an event to highlight the state’s response.

“We knew this was coming. We saw it show up on the East Coast and knew it was a matter of time before it came here,” Walz said. “These producers, these chicken and turkey farms are a huge part of Minnesota’s economy and a big part culturally of who we are.”

Seventeen of the injured and sick birds being cared for at the Wildlife Rehabilitation Center of Minnesota in Roseville have tested positive for the virus.

“We’ve been fielding so many calls about dead eagles I can’t begin to tell you,” said Tami Vogel, spokeswoman for the Rehabilitation Center. “People are finding dead wood ducks in their yard, and people are going on a walk and seeing a goose lying in the street.”

Ominously, it hasn’t just been the waterfowl and raptors that have been testing positive, Vogel said. An injured kingfisher, brought to the center after getting stuck inside a Minneapolis parking ramp, had bird flu.

“I don’t think kingfisher was on anyone’s radar as a susceptible species,” Vogel said. “There are a lot of unknowns about this.”

The scale of the outbreak has raised concerns that the virus is spreading beyond its typically linear passage of waterfowl to raptor and waterfowl to chicken. That uncertainty led to Hall and the Raptor Center to recommend that people wait to fill their bird feeders until summer, in case songbirds are coming in contact with infected feces or carcasses and spreading the disease in the wild.

“There is just so much we don’t know,” Hall said. “We’re thinking about things we can do that could help.”

But songbirds are likely at very little risk of carrying the disease, according to Carstensen and the DNR.

There have only been a handful of known bird flu cases in songbirds throughout history, Carstensen said.

“The risk of them carrying the virus isn’t high, but it is certainly not impossible,” she said. “Birdfeeders are probably not very problematic.”

People who see dead or dying birds are asked to call the DNR’s hotline at 888-646-6367 so they can be tested or, at least, removed before scavengers potentially spread the virus.

Correction:
A previous version of the photo caption misstated the date it was taken.