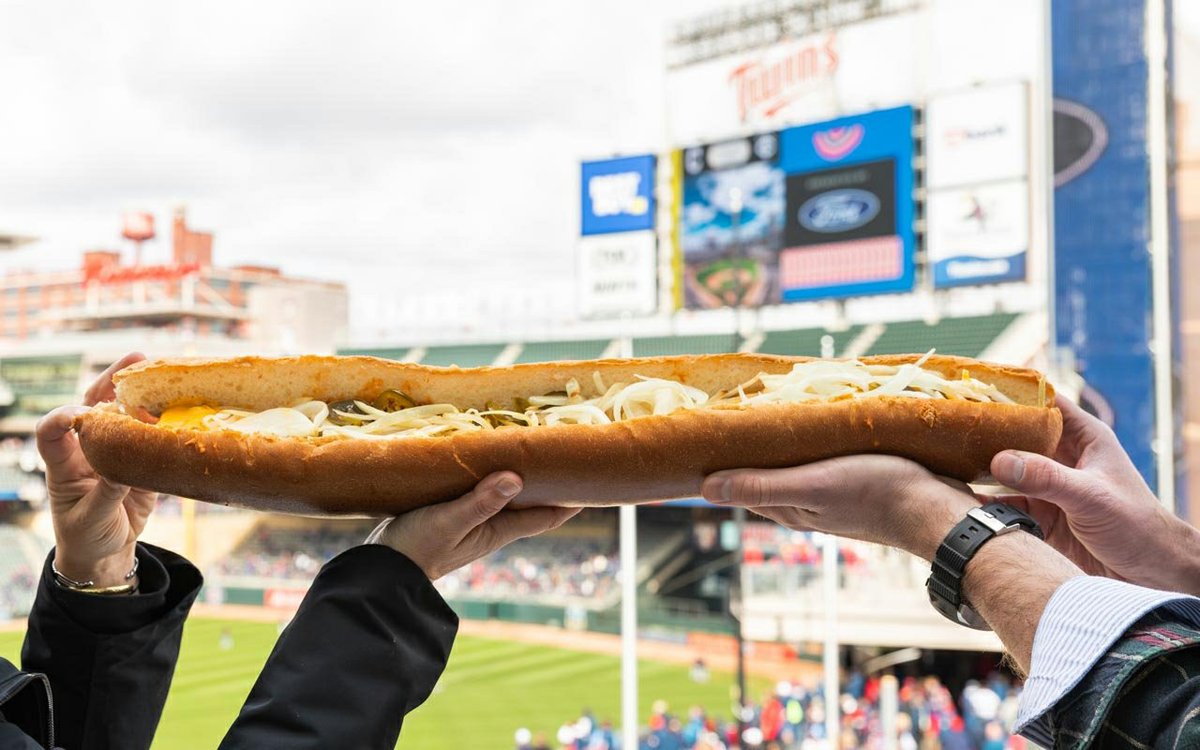 Not only are we in the Final Four Fish Fry Face Off week, baseball is indeed back. The Twins stadium will be cooking today with the home opener, there’s zero snow in the forecast (for at least a week!), and it feels like the downtowns are slowly coming back to life. Can official Ice Out be far behind? While you’re waiting on that, get down with some food truck action, dip into a double scoop you’ve missed, and get ready for some salad wars.

Let’s raise some money for Ukraine!

+ Target Field and the Minnesota Twins are open for baseball business! Since opening day is TODAY, we’ll be running around and checking out real food so you’ll know what to eat at the Twins games this summer. Stay tuned!

+ Some of you who might be used to hitting FireLake before Twins games should know that it is now called Wood + Paddle Eatery. Same space, new chef Niki Heber, and a menu that includes a pork coppa steak, walleye schnitzel, a smoked half-pig head, and a butter burger with smoked herb butter. They are having a little Pig on the Porch pre-game party today with Lift Bridge, if you need a stop before the ballpark.

+ Heavy Rotation Brewing Co. is throwing a grand opening party this weekend to launch their Brooklyn Park brewery. They are asking for patience as they get rolling, but look for food trucks this weekend, around 8 beers on tap, jars of beer, and

+ Licks Unlimited, which I am biased toward as the official ice cream shop of my teenage summers, is OPEN for the season in Excelsior (also, The Dock movie theater across the street is back open and they still have real butter popcorn ok?).

+ Rain or shine kids, The Drive In of Taylors Falls is now open! Oh my lawd I love this pizza burger.

+ Muddy Paws Cheesecake has relaunched their Thursday Food Truck Night. It’s a heckuva deal, pop over to the parking lot, order some hot food from a local truck (yesterday Bad Rooster!) and stroll in to grab some cheesecake while you wait. Nothing but winners. Next week: Cave Cafe.

–  What’s with the flames? Both Broders Cucina and Lat14 are temporarily closed dues to fire damage this week. They are both recovering and working toward re-open again, and thank goodness no one was hurt.

– Petite Leon suffered a set-back as their walk-in cooler quit on them over the night, forcing them to throw away inventory and close shop on Thursday. Check in to see what’s the update before you head over this weekend.

– Guess what’s still here? Bar Brava has has a Covid outbreak among the staff and will be closed until Tuesday the 12th. That BA2 might be a pesky bummer this spring, though we’re still in pretty good shape according to MDH.

– Local Roots will have their final service this Sunday in Richfield. But catering and delivery will still be available, so you’ll still be able to get your chicken club, bacon mac & cheese or Cobb salad. They’re still on the hunt for a potential new location.

>> Just as I heard that California cool-kid Sweetgreen salad shop was going to open locations in the Twin Cities, including taking over iconic Moose & Sadies spot, I got an email saying that locally owned Crisp & Green was going to open 10 more shops in the metro. Let the battle of the bougie bowls begin!

// The breweries feel your weather sads. Two fantastic taprooms will be cranking it up island style this weekend. Pryes Brewing is going full Paradise on Saturday. Live music starts at 2pm, a Magic Hour beer release promises an elite level tropical smoothie IPA, plus patio grilling with jerk chicken skewers and brats. Fair State Brewing has already tricked themselves out at Café Tropical, a cozy craft cocktail bar with hard-seltzer based drinks and specialty slushies. There will be umbrellas and FruityBoom pouches for purchase now through Sunday.

// Kitchen things are best when they’ve earned a patina, which is why there will be valuables to seek at the Kitsch ‘n’ Kitchen pop-down and church basement bake sale on Saturday. Pop-down, because it’s in the basement, see? They are playing it safe so this is a masked event, so come ready. But also come ready to peruse cool vintage goods like muffin tins, aebelskiver pans, cast iron dutch ovens, and more with baked goods and coffee available for purchase.

// I was going to do a list of Easter Egg hunts around town, but turns out: not real eggs. What’s the fun.

// Before you know it, there will be wild edibles popping up in the creeks, woods, and lawns all around you. Make sure you know what’s tasty and what’s not. Classes are open at Four Seasons Foraging, there’s a three-part wild plant ID class that starts at the end of the month, and a class on the Midtown Greenway in May.

// Happy Rex Manning Day to those who celebrate.