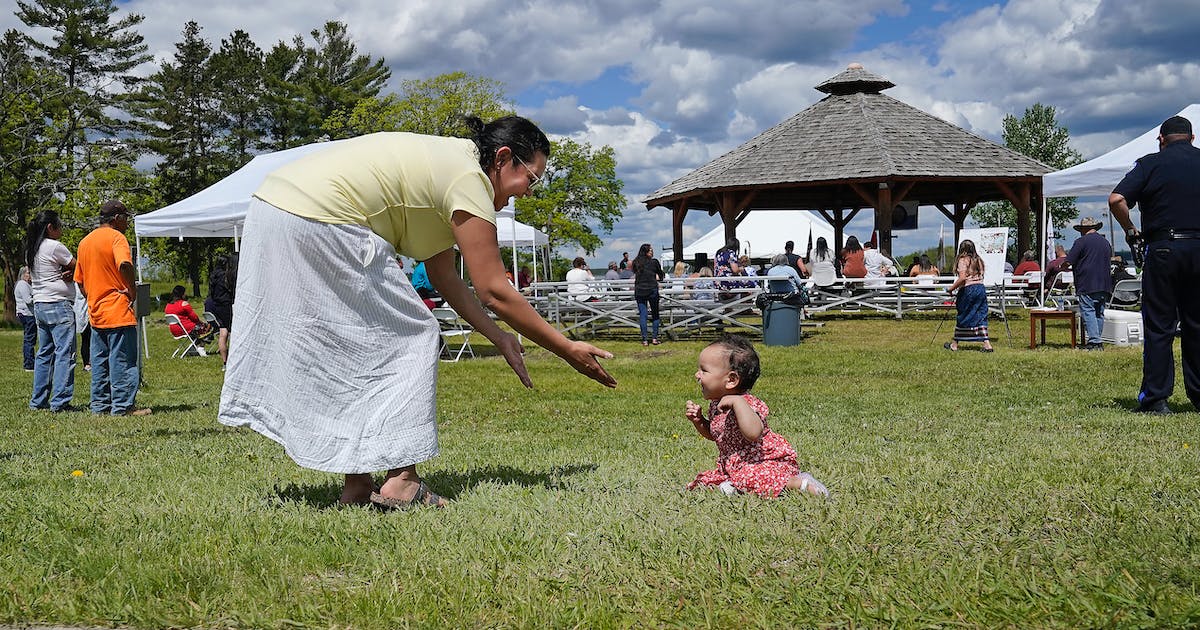 NETT LAKE, Minn. — On powwow grounds overlooking the calm, wild rice-filled waters of Nett Lake, leaders of the Bois Forte Band of Chippewa on Tuesday reclaimed a massive portion of land lost more than 100 years ago, marking the largest Native American land restoration of its kind in the United States.

They were joined by tribal leaders from other Chippewa reservations and dozens of Bois Forte citizens, who gathered to celebrate the purchase of more than 28,000 acres of former reservation land, procured in partnership with the Conservation Fund and the Indian Land Tenure Foundation. Before a ceremonial proclamation was read and papers were signed, a traditional drum group thrummed a healing song. A pipe ceremony invoked the Creator as the scents of a frybread and walleye feast lingered in the air.

“This is historic for Indian Country,” said Bois Forte Chairwoman Cathy Chavers. “We are proud to be here today to bring this back to our people. Our ancestors are looking down upon us, and they are very happy.”

The reclaimed lush forestland falls within the Nett Lake and Deer Creek sections of the northern Minnesota reservation, accounting for 21% of their combined acreage. It was lost to Bois Forte 120 years ago when the federal government sold it to timber companies and homesteaders, with the Potlatch lumber company eventually coming to own the bulk of it.

In recent years, tribal nations throughout the country have been buying back land lost more than a century ago through the disregard of treaties as well as legislation designed to assimilate Native Americans into white culture.

Restoration has long been a goal of the band, but one it expected to meet with small purchases that would take decades to add up to anything substantial.

The sale, tribal leaders said, represents the return of a huge part of their homeland, ensuring hunting, gathering, fishing and trapping land for “our children, our children’s children and the future of Bois Forte,” Chavers said. “We never dreamed this would ever be possible.”

The national nonprofit Conservation Fund bought more than 70,000 acres of Minnesota forestland from the PotlatchDeltic Corp. for $48 million in 2020, with the intention of returning the large swaths within reservation boundaries to their tribal nations. The Conservation Fund worked with the band and the Indian Land Tenure Foundation to make the sale a reality.

The outcome “honors the heritage of this land by reuniting it” with the band and ensuring permanent stewardship, said Larry Selzer, president of the Conservation Fund.

“We must not forget or overlook the injustices suffered by the band in the past,” he said, “but we are here to celebrate a brighter future.”

The Ojibwe band of about 3,600 enrolled citizens bought the land with financing from a company that offers loans to tribal nations for land acquisition projects.

The arrangement represents a model for other tribal nations working to reclaim land, said Cris Stainbrook, president of the Indian Land Tenure Foundation based in Little Canada, Minn., and offered the band financing through a general obligation bond.

“What it does for all of Indian Country, is that it says these large-scale transactions can, should and will be done,” Stainbrook said.

Conservation incentive payments from the state will eventually help the band pay off the undisclosed price tag. Bois Forte expects to directly manage the restored forestland, with a plan that focuses on environmental protection and economic and cultural benefits, leaders said Tuesday.

The 1854 Treaty between the band and federal government set aside a region around Lake Vermilion for the Bois Forte reservation, and the 1866 Treaty added the Nett Lake and Deer Creek areas, much of which was eventually lost when the federal government allowed reservation land to be sold to individuals as part of its assimilation plans. While the band regained some land in 1938, major portions of the Nett Lake and Deer Creek sections, together totaling nearly 135,000 acres, were not owned by Bois Forte.

Like many reservations, Bois Forte’s is a patchwork quilt of land, some owned by the band and some owned by people or interests not linked to the tribe. Much of the Potlatch forest of spruce, aspen and red pine is in the Nett Lake section of the reservation, in St. Louis and Koochiching counties. It’s an area where medicine is gathered and is known for its wild rice harvesting, berry picking and other traditional practices.

Bois Forte member Darren Landgren, broadcasting the ceremony for the Nett Lake radio station, said he’s glad the thousands of forested acres have been returned. But the band should never have been put in the position of reclaiming what it rightfully owned, he said.

“It’s complicated, but it feels good,” he said.