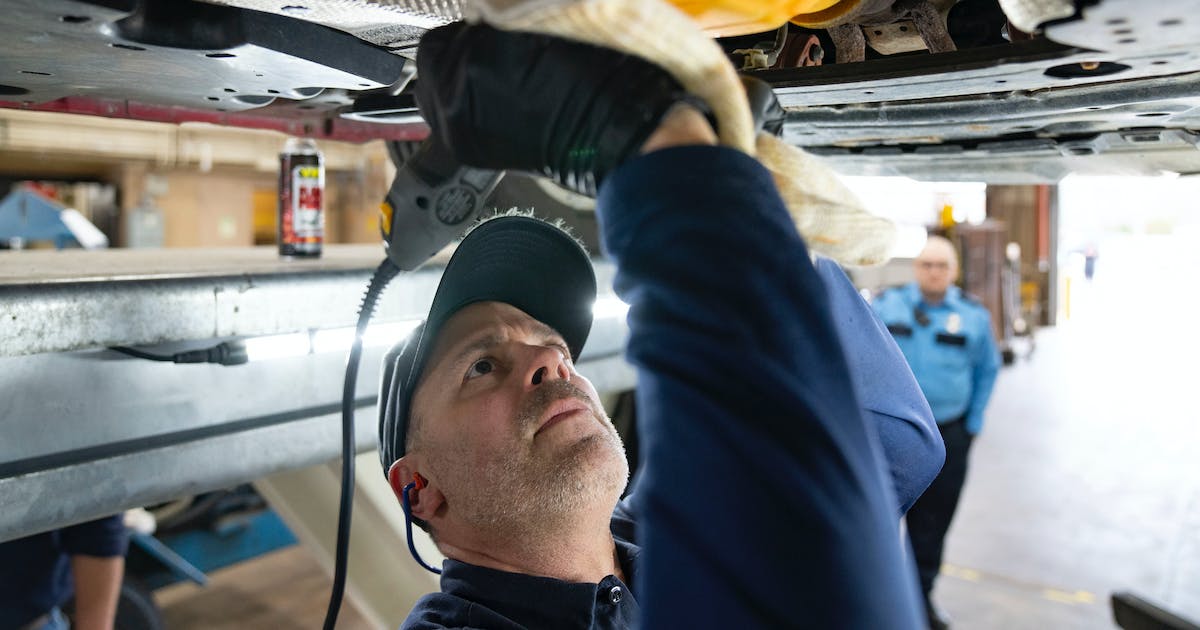 At the direction of hotel staff, the Olmscheid family parked their Kia Sportage in a back lot of the Country Inn and Suites in Eagan and took a shuttle to the airport to start their vacation.

When they returned from their trip and started their vehicle, the family immediately knew something was drastically wrong.

“It was embarrassingly loud,” said Allison Olmscheid, of Sartell, Minn. Her husband looked under their car and saw two saw marks and no catalytic converter. “We never thought it would happen. This actually does happen. We are part of the numbers.”

The sharp increase prompted the National Insurance Crime Bureau to name the Twin Cities metro area as the riskiest place in the country for such thefts. And the trend has shown no signs of slowing down, said Mark Kulda, vice president of public affairs for the Insurance Federation of Minnesota.

Maplewood, Eagan, Bloomington and West St. Paul are among the suburbs that have seen so many catalytic converter thefts in recent years that they now list them as a separate crime statistic instead of lumping them in with other cases of stolen auto parts.

Maplewood had the most thefts in the metro area last year, with 422, according to data collected by the Star Tribune. On a per-capita basis, that makes the problem even worse than in St. Paul, with 1,877 thefts, or Minneapolis, with about 1,560.

Catalytic converters contain precious metals such as platinum, palladium and rhodium, which remove the worst of a vehicle’s toxic pollutants, Their rising value has made the metals more valuable than gold — literally — and put the devices at the center of a Twin Cities crime wave, said Mikael Garland with the St. Louis Park Police Department.

It’s an easy crime to commit, too, Garland added, noting thieves can slide under a vehicle undetected and with a small battery-powered saw remove the part in minutes. Once in hand, thieves can sell the converters to scrap yards that pay up to $1,000 apiece, or hawk them on Facebook marketplace and other websites featuring used car parts for possibly even more, with little worry of getting caught.

“There does not exist any type of monitoring or tracking of the sale of these items like there is for other metal sales,” Garland said.

Two years ago, the St. Paul City Council passed an ordinance making it illegal for a person or business — other than a legitimate auto repair garage — to buy or sell a detached catalytic converter. But there are few laws to dissuade thieves.

Rules such as St. Paul’s have done little to slow the thefts, said Brian Arthur of Converter King, a division of Metro Metals Recycling in Minneapolis, which on its website says its goal “is to pay our customers top dollar for their catalytic converters.”

“These guys are brazen,” Arthur said. “They are a hot commodity. It is something that has to stop.”

Arthur said his shop requires sellers to produce a vehicle title, a bill of sale or auction record when hawking a converter or he won’t buy it. Other places don’t follow those practices, he said.

“You know something is stolen by the way people act,” he said.

Shops buy the converters for the metals, which can be recycled to make new ones.

Catalytic converter theft is a vexing problem for victims, who often have to shell out hundreds or thousands of dollars to get their cars fixed, and for police, too.

Short of catching thieves in the act, “it can be very difficult to catch these criminals, and hard to prove if converters are recovered,” said Lt. Joe Steiner of the Maplewood Police Department.

There have already been 178 thefts reported in Maplewood this year, Steiner said.

Steiner attributed his city’s high numbers, which he called “alarming,” to repeat offenders and criminals who have taken up the thefts because it is quick and lucrative. He noted that many thefts have occurred in commercial parking lots such as at 3M headquarters where vehicles are often left unattended for long periods. “It’s easier to blend in and not be noticed.”

Last year, the Minnesota Legislature created the catalytic converter theft prevention pilot program to mark converters with identification numbers. Cities such as Bloomington and the Anoka County Sheriff’s Office have signed on to promote the program, which etches numbers on catalytic converters. Once registered, the unique number allows law enforcement to trace a converter back to a specific vehicle if a converter were stolen and recovered.

“I hope it deters crime,” said Kimberly Clauson, deputy chief for the Bloomington Police Department, which recorded more than 270 catalytic converter theft last year. If crooks see the converter is flagged, “we hope they move on to someone else.”

Other cities such as St. Louis Park have begun hosting free events to mark catalytic converts with bright, heat sensitive paint. The city, which had 220 thefts last year, hosted one Thursday and all 75 spots were snapped up.

“We can’t require a dealer to reject a marked converter, but if one is spray painted, they might be more critical before they accept it, or if there is an individual coming in week after week, especially if they have been marked,” Garland said.

The program appears to have had some success, Garland said. “We are only aware of just one or two [painted converters] that have been stolen.”

While victims feel the thefts most acutely, all drivers could feel pocket book pain. The Insurance Federation of Minnesota estimates stolen catalytic converters could result in as much as $25 million in insured losses in the state this year, putting increasing pressure on auto insurance premiums.

With insurance, the Olmscheids shelled out only a couple hundred dollars to get their vehicle fixed.

“We were lucky,” Allison Olmscheid said. “But the experience was still unnerving. It is not a good experience to go through.”

How to deter catalytic converter theft