Controversial Two Harbors mayor announces 'I will not resign' 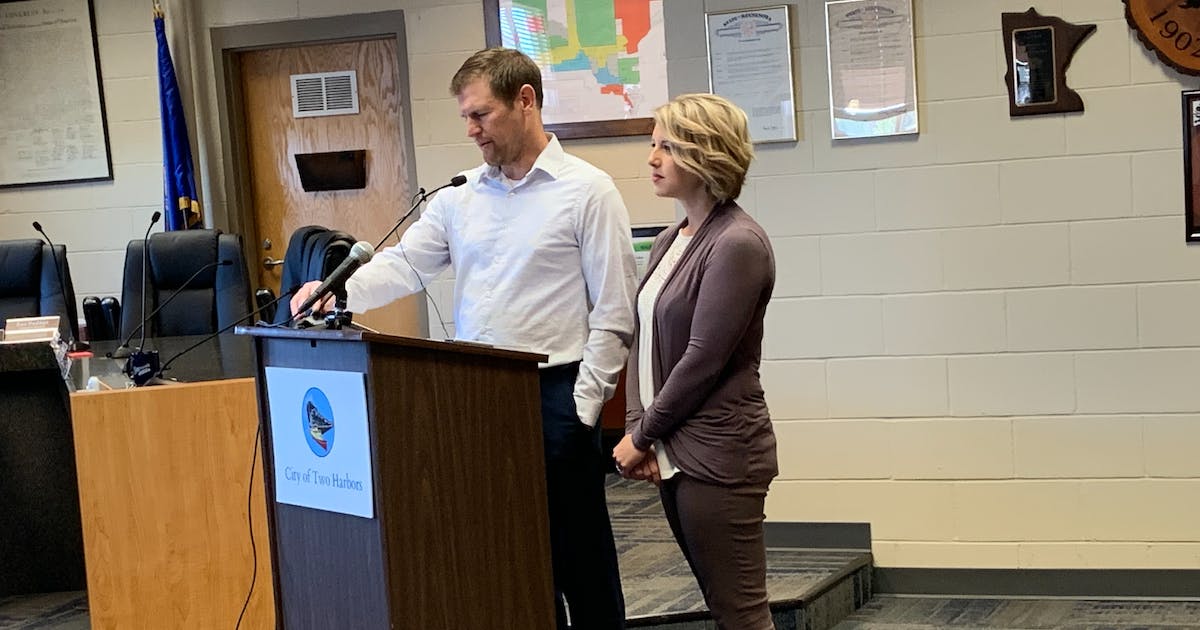 TWO HARBORS, Minn. — The controversial mayor of Two Harbors, recently given the option by the City Council to resign or face a recall election, is holding tight to his position — for now.

“We’re taking on bigger projects and we’re starting to move forward,” Chris Swanson said Wednesday morning from a podium at Two Harbors City Council Chambers. “I will not resign.”

The mayor’s future is in the hands of Two Harbors voters who will have the choice of whether to recall him on their ballot in August. If they vote him out, there will be a special election for a new mayor in the fall.

Swanson, who called the press conference, did not take questions from media or the small gathering of citizen organizers behind petitions to oust him. He spoke for just more than 8 minutes.

Swanson then immediately left the building following his wife Rebecca, who had been by his side at the podium, and elementary school-aged son Caiden, who seemingly recorded the speech on a phone from a front row of chairs.

The mayor has been accused of using his position within the city to promote businesses with ties to his family. City Attorney Tim Costley offered a written opinion that Swanson’s use of social media violated the city’s communication standards. The mayor, a local businessman who is in his second term, first faced scrutiny when he was featured on a podcast brainstorming about building an underwater hotel on Lake Superior.

The City Council approved setting the date for a recall election at its last meeting, with just Swanson voting against it. That decision started a clock: Swanson had until Tuesday afternoon to decide whether he would step down or face a recall election. On Wednesday morning, city clerk Patricia Nordean confirmed that Swanson had not left his position.

Resign or Recall, a grassroots group of Two Harbors residents who are fed up with the mayor, has spent several months creating a petition and collecting signatures to initiate a recall. It’s efforts were stalled by a lawsuit from Timothy Jezierski, head of the Lake County Republicans, and two anonymous residents. He challenged the group’s claims that the names on the petition would not be made public. Resign or Recall pulled its petition, bringing an end to the lawsuit.

The group tried again and secured signatures from more than 20% of the city’s registered voters — the required amount to kick off recall efforts. Jezierski has since filed another lawsuit in Lake County District Court.

Todd Ronning, one of the Resign or Recall’s founders, said he has hoped all along that Swanson would simply step down.

“The path forward is clear,” Ronning said. “We will expect to see it on the ballot in August.”

Swanson on Wednesday described himself as a visionary, a leader who loves Two Harbors.

“I’m a big cheerleader for it — for getting things done,” he said. “That being said, I can’t abandon the vision, nor can I abandon the many people who believe that what we’re doing in the community is finally working.”

Swanson’s decision to remain mayor did not surprise most residents.

“I prayed all the way here,” said Resign or Recall organizer Toni Wangen, who was in the audience for the media conference. “I knew in my heart of hearts it wasn’t going to happen.”

Rob Fasteland, who has lived in Two Harbors for 40 years, said he signed Resign or Recall’s petition because he believes Swanson should keep his role as mayor separate from his personal businesses. It’s nothing personal, he said.

“It’s his business to resign or not resign,” Fasteland said. “It’s going to cost the city money — the process.”