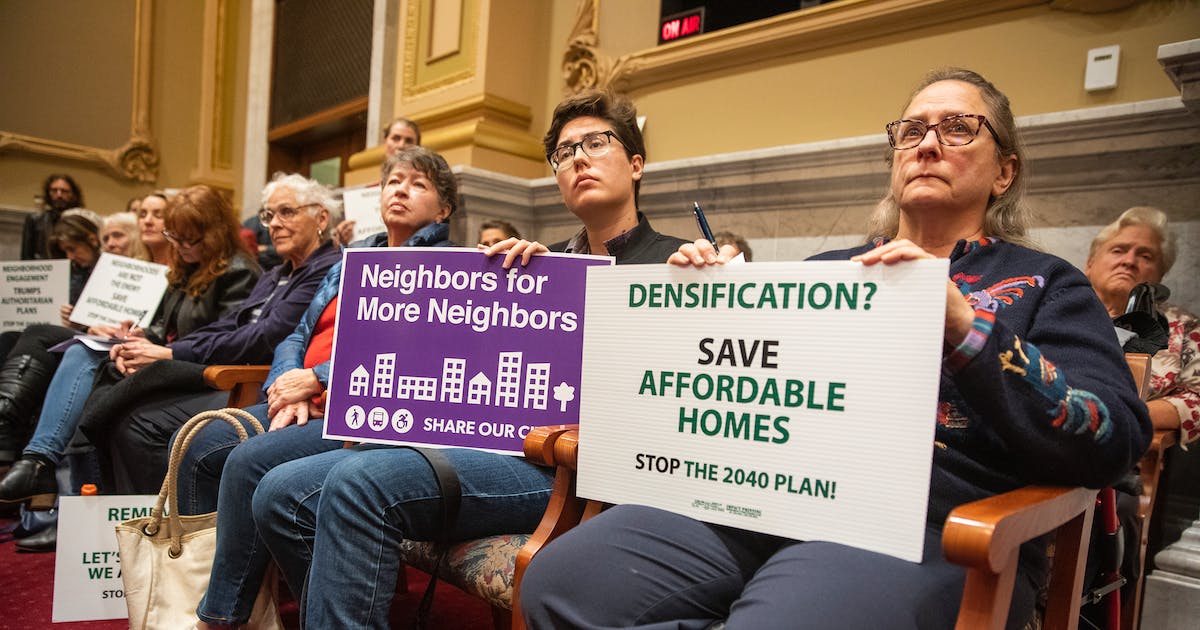 Minneapolis cannot enforce its controversial long-range plan eliminating single-family zoning, but it could do so in the future if it meets certain conditions, a Hennepin County district judge ruled Wednesday in a lawsuit brought by a trio of environmental organizations.

Judge Joseph Klein left open two routes by which Minneapolis could continue to enforce the sweeping 2040 plan that drew national attention as one of the most progressive policies in the nation, seeking to increase density amid a housing crunch. The city could use the plan if it “satisfies” requirements outlined in the Minnesota Environmental Rights Act (MERA) or “prevails in establishing an affirmative defense.”

“While this may no doubt create no small amount of short-term chaos — which the court does not take lightly — this court is inclined to agree that, under MERA, no other action by the court would properly address or remedy the likely adverse environmental impacts of the 2040 Plan,” Klein wrote in a 28-page order.

Keith Olstad, President of the Audubon Chapter of Minneapolis, one of the groups that brought the lawsuit, said: “We’ll wait to see what the city wants to do. Our hope would be that the city would say, ‘Yes, we recognize we should have done this from from the get-go, and we’ll do the appropriate environmental assessment of the 2040 plan to make the adjustments needed and return it to the City Council.'”

In a statement Wednesday night, Deputy City Attorney Erik Nilsson said: “We are still reviewing the order and, while we anticipate filing an appeal, will consider all options.”

At the heart of the legal case is a question of whether the city needed to complete an environmental review of the 2040 plan or evaluate each construction project individually.

Minneapolis’ comprehensive plan to increase density and population made waves when it passed the City Council in 2018 for eliminating single-family zoning — previously covering nearly half of the city — something that had been not been done in any other major American city.

The environmental groups Smart Growth Minneapolis, the Audubon Chapter of Minneapolis and Minnesota Citizens for the Protection of Migratory Birds were not pleased. They sued to force the city to conduct an environmental review, alleging that a plan allowing the increase in density would likely pollute natural resources because of the increase in hard surfaces, soil erosion and increased runoff, among other adverse effects.

The city countered, arguing that environmental reviews were meant for individual projects and not comprehensive plans guiding the overall direction of development.

A Hennepin County district judge previously dismissed the lawsuit, but the Minnesota Supreme Court reversed that decision and remanded the case back to the district court after holding that the MERA does in fact apply to city comprehensive plans.

On Wednesday, Klein issued summary judgment in favor of the environmental groups, writing: “The City has not put forth any evidence showing that a full build-out will not have any of the potential adverse environmental impacts.”

He criticized the city’s defense for “vaguely” dismissing the risks that the plan presents to the environment by arguing “a full build-out of almost 150,000 new residential units is extremely unlikely to occur,” though that is what the plan authorizes throughout its duration.