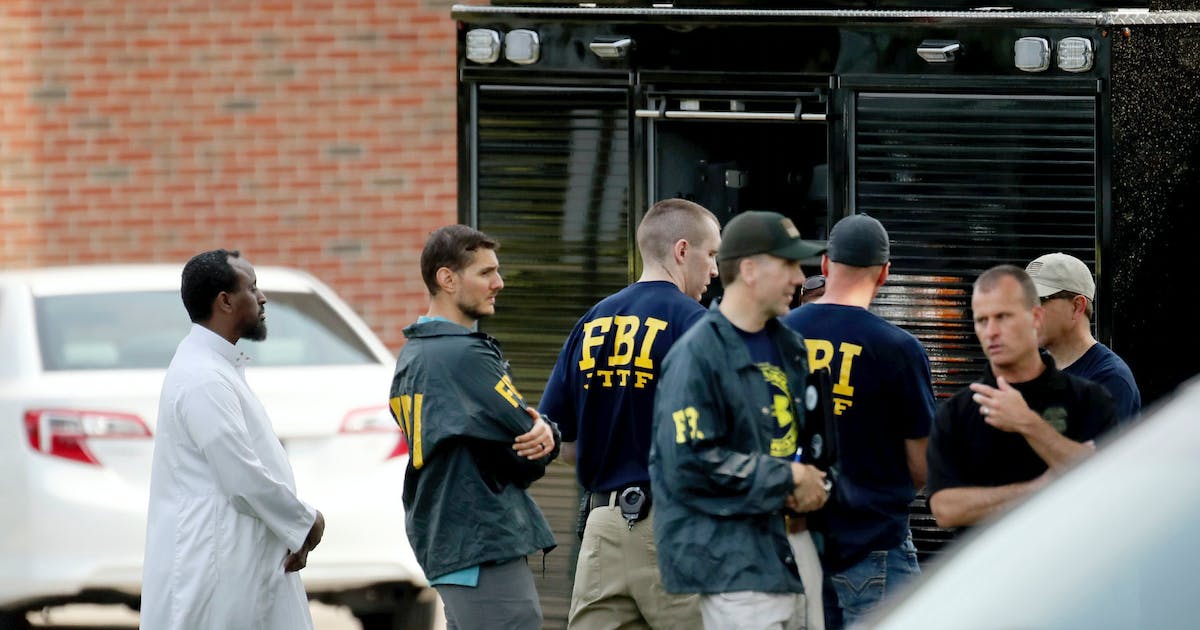 Michael McWhorter, 33, and Joe Morris, 26, both face mandatory-minimum sentences of 35 years in prison after pleading guilty to a series of federal felonies. The crime spree of the “White Rabbits 3 Percent Illinois Patriot Freedom Fighters” included robbing a Wal-Mart with airsoft guns, trying to extort the Canadian railroad, invading homes and attempting to firebomb a women’s health clinic in Champaign, Ill.

Attorneys for McWhorter and Morris are both asking U.S. District Judge Donovan Frank for 10-year sentences, citing their critical testimony against Emily Claire Hari — the mastermind of the terror spree who was sentenced last year to 53 years in prison.

The Minnesota U.S. Attorney’s Office says it plans to ask Frank to grant leniency for the two men because of their cooperation, opening the door for the judge to issue a sentence below the statutory mandatory minimum.

Leadership for Dar Al-Farooq is also advocating for a reduced sentence for the two men, according to prosecutors.

“Both Morris and McWhorter have expressed remorse for their participation in the bombing and have accepted responsibility for their actions,” said Minnesota’s U.S. Attorney’s Office in a sentencing position filing. “The government acknowledges and greatly respects Dar Al-Farooq’s ability to forgive their attackers and to use this act of terrorism as a platform to promote mercy.”

Imam Mohamed Omar, executive director of Dar Al-Farooq Center, issued an open letter to fellow clergy and faith leaders, asking them to sign an open letter to the court urging forgiveness, and calling McWhorter and Morris two young men who “temporarily were plunged downwards into the darkness of Emily Hari’s world.”

“The harm that was done is real, the crime that was committed is real, the horror of what happened that day is real, but what’s also real is our opportunity to offer real forgiveness, and lead by example,” the letter said. “We believe that only through forgiveness can we have any real chance to heal and move forward.”

McWhorter and Morris both pleaded guilty to taking part in the Aug. 5, 2017, terror attack that many in the Twin Cities Muslim community say left a looming fear of more bias attacks. In the two-and-a-half week trial for Hari — then known as Michael Hari — the two men testified that Hari took advantage of their financial desperation to recruit them to help carry out the White Rabbits plot.

Morris, who described Hari as a father figure, said Hari told him they were taking orders from a CIA agent called “Congo Joe” to harass “untouchables,” such as Antifa and billionaire George Soros, and that Hari told him the mosque was a training camp for ISIS.

Both men said Hari picked them up on Aug. 4 in a rented pickup truck filled with assault rifles, a sledgehammer, masks, gloves and a 20-pound black powder bomb. McWhorter and Morris had never met before that night, they both said.

At Hari’s instruction, Morris broke out a window with a sledgehammer and threw inside a bottle containing unleaded gas and diesel fuel, according to both men’s testimony. McWhorter then tossed in the pipe bomb, they said. The men high-fived when they heard the bomb had exploded in the mosque.

Later, when federal investigators were closing in, Hari “groomed” Morris to take the fall by transferring evidence, including a vault containing guns, into his name, said Assistant U.S. Attorney John Docherty at trial.

The men pleaded guilty in 2019, and their testimony in court was key to placing Hari at the center of the attack.

“The government learned of its cases against Emily Claire Hari, Joe Morris and Michael McWhorter because of one person: Michael McWhorter,” said Chris Madel, McWhorter’s attorney, in court documents. “McWhorter’s crimes were committed at the invitation, direction, and plan of [Hari] … In recognition for his cooperation, a sentence that is a significant downward departure and that disregards the mandatory minimums is not only warranted, but also supported by the government.”

In his plea for leniency, Madel said his client had a spotless criminal history before recruited as a “desperate co-conspirator” in Hari’s plot. Madel said McWhorter was manipulated by Hari’s lies about Muslims. After his arrest, McWhorter “immediately recognized his mistake in trusting Ms. Hari and began to cooperate with law enforcement,” even before retaining a lawyer.

Morris’s attorney, Robert Richman, said his client has a “reduced mental capacity.” Morris suffered from undiagnosed mental illnesses, including schizophrenia and depression, and he’s been prescribed anti-psychotic medication in jail over the past four years to mitigate auditory and visual delusions, according to Richman’s court filings. When Morris confided to Hari he heard voices, Hari took advantage of Morris’s illness, telling him to follow the “angels” speaking to him.

Hari also exerted a special power over Morris, said Richman in the filing. “No one in the world was closer to him. When Hari told Joe to do something, Joe did it. Hari was a hero to Joe. He felt that Hari accepted him. … Given the despair of self-loathing in which Joe was mired for most of his life, one can only imagine how refreshing it was to be accepted by Emily Hari.”

Both McWhorter and Morris also asked Frank to factor the four years they both served in Sherburne County Jail, including during a pandemic that created harsher-than-normal conditions of imprisonment.