Did the Twin Cities population grow or shrink during the pandemic? 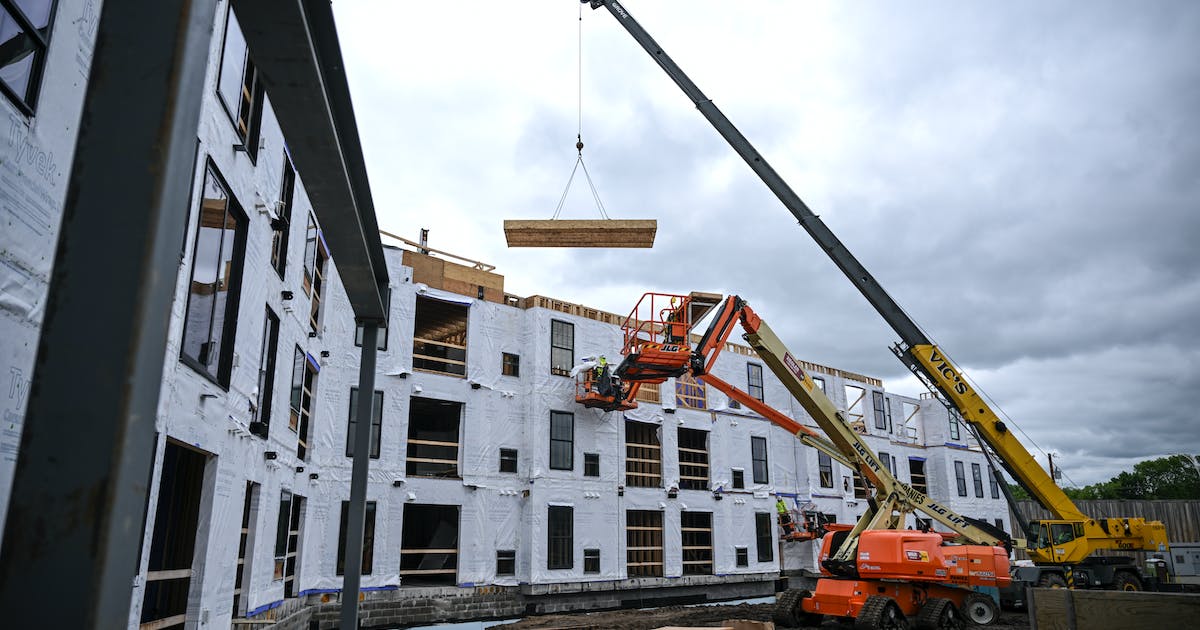 From his lakeside Robbinsdale home, Bill Blonigan can see the city’s newest apartment building rising on the shores of lower Twin Lake, yet another example of the city’s recent rush of new housing.

After years of stagnant growth, Robbinsdale has three new apartment buildings, two of them already full and a third on the way; so why would the U.S. Census Bureau say his city is shrinking?

“They might be right, but I kind of doubt it,” said Blonigan, the city’s mayor, responding to the latest population estimates by the Census Bureau released Thursday.

The federal estimates, some of the first to show how the pandemic has reshaped Minnesota cities and towns, show people leaving the Twin Cities and some first-ring suburbs like Robbinsdale for further-out exurbs like Lakeville.

Blonigan’s gut feeling that his city is growing isn’t born out by the census figures, which say Robbinsdale’s population shrank between July 2020 and July 2021 by 2.4%, or about 350 people. The Met Council’s estimates show Robbinsdale grew by just over 1%. That’s just shy of 200 additional people.

State Demographer Susan Brower also questioned the census findings about suburbs like Robbinsdale losing population. “Are these losses real, even though building has continued in many of these communities?” she said.

The federal figures were drawn up using new methods, said Brower, and from what she’s seen so far, the census figures don’t jibe with her expectations. “It’s really hard for me to say how much of this is real and how much of this is as a result of those methods,” she said.

Met Council officials also were puzzled by the census figures. Their reaction to word that Minneapolis and St. Paul, as well as most of the inner-ring suburbs, lost population over the past year? It didn’t happen.

In an interview Wednesday, Lisa Barajas, the Met Council’s community development director, and Joel Huting, research manager, said the core cities have actually been growing, as has most of the Twin Cities metropolitan area. And they said they have the better data to prove it.

Both estimates use the 2020 census as a starting point, but then rely on different data sources to estimate how the population changed in the following year. For example, the Met Council relies heavily on housing stock and building permit data, and then estimates vacancy rates and the average household size. The census relies on birth, death and migration records, but had to make numerous changes to its methodology largely due to the pandemic.

The integrity of the 2020 census has been questioned since before the counting even began. The once-a-decade headcount was delayed due to the pandemic and then the Supreme Court sided with the Trump administration’s request to halt the counting in October 2020. Last week, the Census Bureau released state-level results of its study to determine how accurate the 2020 census was. Unlike in the previous headcount, they found numerous states that likely overcounted or undercounted their populations.

Brower was also concerned that the Met Council and Census Bureau estimates are so different. Typically, they match “pretty closely,” she said.

“I think what we have here are two different sets of data, two different methods used to produce them,” Brower said. “How do we look at them together to really understand what’s going on?”

Huting attributed the difference to the Metropolitan Council using data that gives it a better up-close view of where residents are living and when they move. For example, Hennepin and Ramsey counties issued 12,000 residential building permits between April 2020 and April 2021, he said. That and almost no change in residential vacancy rates and occupancy rates contradict any presumed population decline, Huting said.

“Part of the difference [between Met Council and census data] is that we have access to much more granular, on-the-ground data locally,” Huting said. “We are going in a different direction than the Census Bureau.”

City officials also are scratching their heads over why the two sets of population estimates are so out of whack. The signs officials in both St. Paul and Minneapolis say they’re seeing are at odds with the idea of a decreasing population.

“The numbers are conflicting, and that might be because of the differences in methodology,” said Nicolle Goodman, director of Planning and Economic Development for the city of St. Paul. “I know we’ve seen growth in the number of housing units [built]. I guess it’s just too soon to say, really. It’s something that we’ll keep tracking.”

There are areas of agreement: Both the U.S. census and the Met Council say the population fell in some close-in suburbs like St. Anthony, Mounds View, Falcon Heights, Lauderdale and Crystal.

The story was very different for cities like Maple Plain, where the Met Council saw a 17% increase in population compared to the Census Bureau’s 2% decrease. Those differences resulted in a vastly different total for Hennepin and Ramsey county populations. The Met Council thinks the 2021 population in Hennepin County is about 22,000 people larger (and Minneapolis about 9,000 larger) than what the census estimates.

For Falcon Heights Mayor Randy Gustafson, who lives in one of the few metro cities that shrank according to the estimates from the Met Council and the census, there’s an easy explanation. The city encompasses much of the St. Paul campus of the University of Minnesota, and when the school shifted to distance learning during the pandemic students who otherwise would have moved into nearby housing stayed away. “That could give you a 200-person fluctuation pretty easily,” said Gustafson.

There’s agreement among the agencies that Lake Elmo is seeing tremendous growth, and that’s no surprise to City Administrator Kristina Handt. A connection to the Met Council sewer system in 2016 opened the door to more development, and the city went from issuing 32 building permits in 2013 to 240 by 2016. That number has hovered between 250 and 300 every year since, she said.

“Our farm fields are being turned into housing units,” said Handt. The city’s location just 15 minutes from downtown St. Paul with its bucolic charm and lakes have drawn so many new residents that the city has had to put a partial moratorium on construction until it can resolve an ongoing problem with its water supply.

“Some residents feel that we’re growing too fast,” said Handt. “From a city perspective, outside of our water issues, we feel we’ve been able to keep up pretty well.”