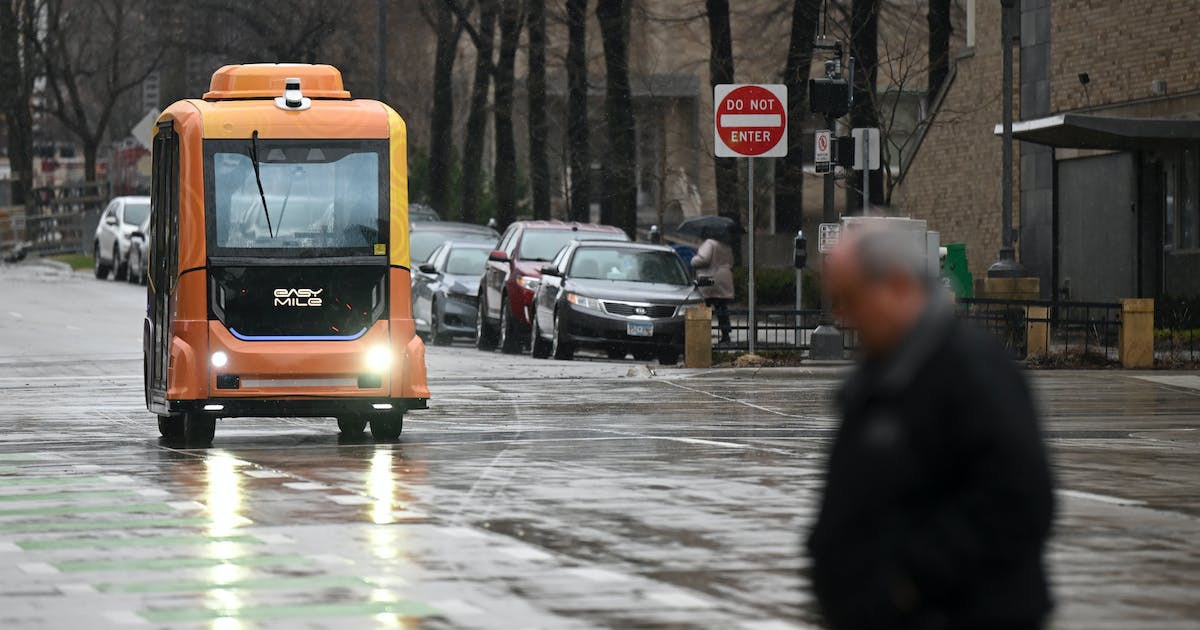 ROCHESTER — With a clang worthy of a San Francisco cable car, the Med City Mover autonomous shuttle sidled up in front of the Mayo Clinic’s Gonda Building and its doors slid open. Two women stood there, hesitating.

They’re among a trickle of passengers who have climbed aboard the driverless Med City Mover, a six-person electric-powered vehicle launched with fanfare last September in a project led by the Minnesota Department of Transportation (MnDOT). Two shuttles are serving as a movable experiment, providing free rides along a 15-block loop through downtown seven days a week.

While the Med City Mover only draws about 10 passengers a day, the state has already learned some lessons about autonomous vehicles, especially how they operate in Minnesota’s storied climate.

The sensors on the vehicles are so finely tuned that at first, they slowed down or stopped entirely when they mistook snowflakes, leaves and high winds for collision hazards, said Tara Olds, deputy director of MnDOT’s Connected and Automated Vehicles office. On colder days, moisture from other vehicles’ exhaust at stop lights and intersections was detected as an object, as well.

MnDOT has worked on upgrades with EasyMile, the Mover’s French manufacturer, “so it has a better ability to filter out those things,” Olds said.

Broadly speaking, autonomous technology “needs to be further refined, developed and proven to operate in this glorious weather we have here in Minnesota,” said Frank Douma, a researcher at the University of Minnesota’s Center for Transportation Studies.

“Demonstrations are important because the technology needs to continue to mature,” Douma added, “but we need to get them out of California, Arizona and Texas and operate in place where there’s a wider variety of weather.”

More research is coming. The $1.2 trillion Infrastructure Investment and Jobs Act, signed by President Joe Biden in November, sets aside funding to study the impact on roads from self-driving vehicles.

The Med City Mover deploys technology to communicate with traffic signals and signs to help with traffic flow — for example, it doesn’t turn right on red. While there’s no driver, an attendant from the transportation company First Transit is onboard to troubleshoot.

Taylor Stevens, a First Transit attendant, said the first question passengers usually ask is whether the Mover has been in an accident. Negative, he replies, but there was one occasion where a wind gust caused a highway sign to fly into the Mover, chipping its paint.

Olds notes the Med City Mover is one of the first autonomous pilot programs in the country that functions in a downtown urban environment — many other experiments operate on dedicated paths.

The tightly drawn loop in Rochester serves up all sorts of challenges beyond workaday traffic — including road work, commercial construction, cyclists, a throng of Mayo Clinic patients and employees out and about, and shoppers at the People’s Food Co-op, its second stop.

Olds said MnDOT worked with the city and construction firms to create an access path around road work for the Mover, but it could result in the shuttle going into “manual mode,” with the attendant temporarily taking control of the vehicle.

Stevens said there haven’t been any problems with cold weather sapping the Mover’s electric battery — the vehicles are charged overnight.

As home to the Mayo Clinic and Destination Medical Center, Rochester was a perfect fit for testing innovative technology, said Patrick Seeb, executive director of DMC, a project partner.

Mayor Kim Norton said in an e-mail that the city of about 118,000 residents was happy to host the project, “but I don’t believe we are ready for a permanent purchase [of a shuttle] should one even be available. We are anxious to hear what has been learned from this pilot and understand the next steps that might occur based on that knowledge.”

Stevens said they hope to see more passengers as the weather warms up; the Med City Mover is expected to wrap up its run in August. People often ask why there aren’t more stops — the response is that it’s a $1.5 million pilot project, not public transit. And it’s not uncommon to see pedestrians point at the toaster-shaped vehicle with delight or whip out their phones for a quick photo.

In other cases, motorists and cyclists get frustrated with its slow speed of 10 to 15 mph and frequent stops. As Olds notes, “These are new vehicles, new technologies, we’re still learning.”