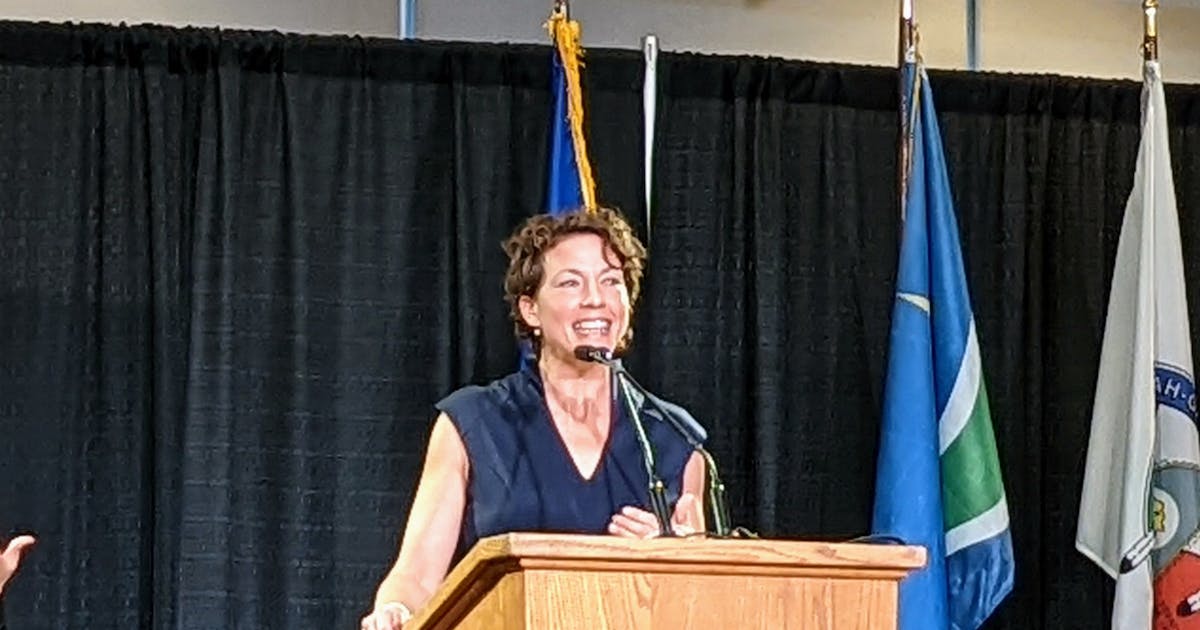 Larson’s first in-person State of the City speech since 2019, held at the Duluth Entertainment Convention Center and virtually, set a hopeful tone for post-pandemic life in Duluth, urging an “exhausted” city to “act boldly” and meet the moment.

“We’ve weathered a storm these past two years — a difficult and dark one. Older residents feel it in their isolation. Parents feel it in their exhausted bones. Young people feel it in their anxiety over the future,” she said. “But tonight, I want to focus on finding our light. … Looking ahead, we will continue to use every lever we have to build this bright and bold community.”

Here are a few of the proposals Larson revealed in her speech:

Duluth’s City Council declared a climate emergency last year, the second Minnesota city to do so. The city has also pledged to reduce its own greenhouse gas emissions.

Those efforts aren’t enough, Larson said Tuesday. A new goal is to achieve carbon-neutrality by 2050, a Cities Race to Zero commitment.

“There is growing urgency to go bigger and bolder in our actions,” she said. “This is in line with science, and it is essential if we are to remain economically viable.”

Across Duluth and throughout the pandemic, mental health incidents, drug overdoses, homelessness and domestic violence reports have increased, Larson said.

“We’ve seen it in a record number of police and fire call outs,” she said. “We’ve heard it in complaints about aggressive panhandling and erratic behaviors. We’ve felt it as more and more residents feel unsafe.”

“But as Chief (Mike) Tusken has repeatedly said, we also can’t arrest our way to a better community,” she said.

Larson, along with Duluth police and the city attorney’s office, said she was calling for the use of community courts. It’s a start to addressing less serious threats, she said, bringing together judges, probation officers, county and city attorneys, the jail and police. The intention of a problem-solving community court is to identify chronic offenders and develop a specific plan, like help for substance abuse or mental health issues, to address their needs, Larson said.

It could also mean “laying out frank choices and strict accountability,” she said, with the intention of freeing up police for other work and offering stability for those who need support.

Duluth saw a record number of building permits and investments in 2021, Larson said, and now plans an internal audit of the city’s economic development strategy to take it “to the next level.”

She also announced a national venture capital firm will soon offer $5,000 “idea accelerator” grants to local entrepreneurs with ideas but without business plans, as the city partners with Heartland Forward, an economic improvement think tank, and Builders and Backers, the venture capital firm.

“Gone are the days where we anxiously hoped for some large out-of-town project or developer to kind of save our day,” Larson said, citing “homegrown innovation” as a big part of future economic development in the city.

A new taskforce — only the third Larson has conferred in her six years as mayor — will focus on downtown safety and investment, and be led by Greater Downtown Council President Kristi Stokes and Duluth Superior Area Community Foundation President Shaun Floerke. In recent months, residents have complained about Skywalk crime and drug use.

The group will offer public recommendations in five months.

The city has a plan to give every Duluth resident and business access to affordable and reliable fiber optic internet within 6 years, which will go before the City Council for approval. Using federal pandemic relief money, a pilot program will soon enroll 2,000 Lincoln Park homes.

Only 6% of city residents have access to fiber optic internet, Larson said.

She also announced a new online communication tool and service delivery system for permitting, along with a digital process for reviewing electronic plans. All are intended to speed up the city’s permitting process.