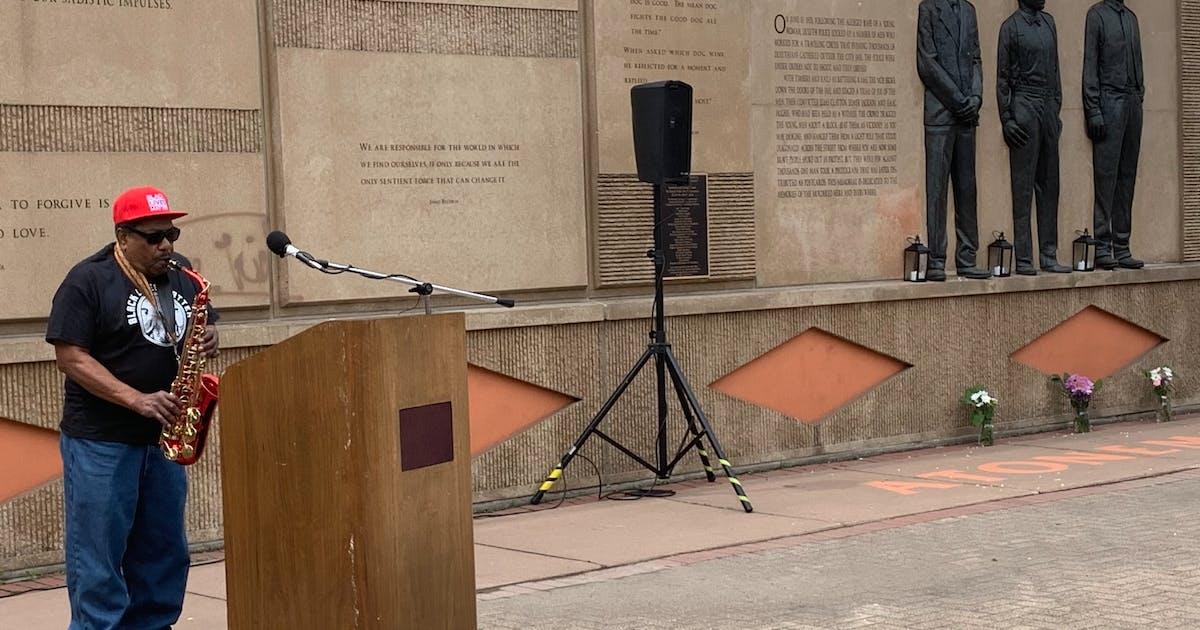 DULUTH — Local blues player Billy Mahdi stood in front of the memorial to Elias Clayton, Elmer Jackson and Isaac McGhie on Wednesday afternoon with a message for the 50-some people who turned out downtown on the 102nd anniversary of the Duluth lynching.

Mahdi led the group in a singalong, accompanied on his alto saxophone to kick off the Clayton Jackson McGhie Memorial’s annual Day of Remembrance. The event honors the three Black circus workers who were taken from jail cells by a mob and hung from a light pole in front of a reported 10,000 people on June 15, 1920.

The men, part of a crew of traveling circus workers, were falsely accused of raping a white woman.

Wednesday’s 30-minute event included spoken-word poetry by Xzavion Hayes, a student from Denfeld High School in Duluth whose poem “Superstition” is a sharp critique of local leadership. Jes-wa’ Harris spoke about “a steady hum” running through his life, and the influences of pop culture ranging from Spike Lee’s “Do the Right Thing” to Theo Huxtable from “The Cosby Show.”

“It’s all the voices of the ancestors combined that is creating that hum that I speak of — that I saw and felt,” he said. “It’s this hum that has pushed me to my purpose. It has carried me and lifted me. And although I am tired, I am concrete and unwavering in serving to lift those where I can help.

“So, brothers Clayton, Jackson and McGhie, I heard you, and I am listening.”

The annual event — held at a corner memorial space across the street from the site of the lynching — has been in flux in recent years. In 2020, COVID-19 derailed plans to again draw thousands of people to the streets of Duluth — this time to honor the men on the 100th anniversary. Last year’s makeup event was also stalled by the pandemic. Keynote speaker Bryan Stevenson, founder of the Equal Justice Initiative in Montgomery, Ala., was supposed to come to Duluth but instead delivered a virtual address.