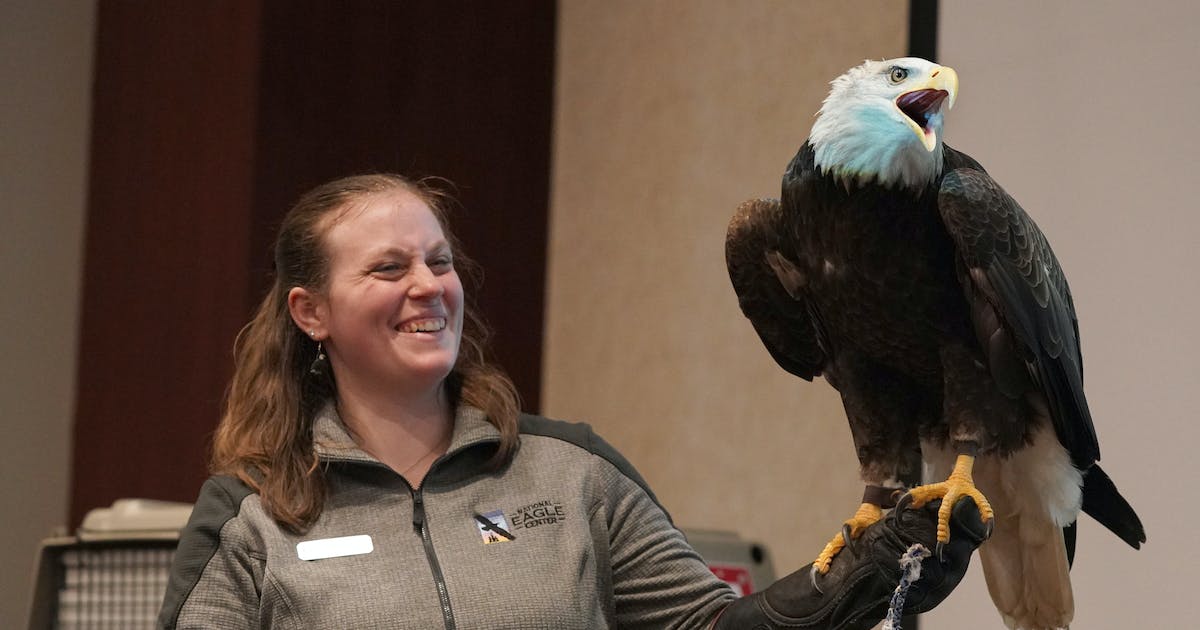 Traveling shows to the Science Museum of Minnesota and the Mall of America are designed to help people stay connected to the National Eagle Center in Wabasha, Minn., while it’s closed during its $27 million renovation and expansion.

Bringing the birds along for the ride? It makes people care, said Ed Hahn, marketing manager for the center.

“People are all just really moved when they meet the birds. There is definitely a connection that is made between people and a living ambassador of the species,” Hahn said. “It can be an emotional, moving and touching experience. Having live eagles certainly heightens the educational experience.”

Eagles were stars of the show Friday in the Science Museum’s Discovery Hall. They’ll be back again for three shows Saturday, at 9:30 a.m., 10:30 a.m. and 11:30 a.m. The shows are free with museum general exhibits admission.

The center, which first opened in 1999 on Main Street and was replaced by the current facility in 2007, is home to four live eagles that because of some type of disability or previous injury cannot return to the wild. The first phase of the project is expected to be complete this spring, with expanded space for even more birds, new collections and interactive exhibits.

Improving docks on the river near the center, as well as creating an amphitheater and outdoor community space, also is part of the project. The dock improvements will allow ships for Viking River Cruises, which has announced plans to launch on the Mississippi River from St. Paul to New Orleans, to stop at the center, Hahn said.

The center has been closed since Nov. 1 for reconstruction and is expected to reopen soon, officials said.

On Friday, it was Latsch’s job to serve as ambassador.

Found in the summer of 2016 on the ground near an eagle’s nest along the Mississippi River near Winona, the recently hatched bird was taken to the University of Minnesota Raptor Center where veterinarians discovered that he is blind in his left eye. He has been one of the birds used for outreach since 2018.

While Tina Lueck held the six-year-old eagle perched on her arm, Grant Fogt, an avian education specialist, shared some eagle facts with about 60 people in the audience. For example, eagles call 49 states (all but Hawaii) home, their eyesight is so keen they can see a rabbit up to 3 miles away and their necks allow them to rotate their heads 270 degrees.

The center’s other eagles are Was’aka, a 16-year-old who came to Wabasha from Florida; Angel, who was found as a fledgling with a broken wing and never developed an ability to fly; and Columbia, who was hit by a car while she was feeding on a dead deer at the side of the road.

In addition to mending her broken right wing, veterinarians at the University of Minnesota Raptor Center found a small amount of lead in Columbia’s blood. Hahn said it was enough to cause neurological damage and make her release into the wild impossible. Columbia’s story highlights continued risks to eagles, he said, despite the success of bringing them back from the brink of extinction.

Lead poisoning, be it from fishing tackle in fish or ammunition fragments in animal entrails left in the woods, takes a toll. Center officials plan to make promoting safer options for hunting and fishing as part of their ongoing educational programming, Hahn said.

“An amount of lead no bigger than the head of a pin — about the size of Lincoln’s nose on a penny — is enough to kill an eagle,” Hahn said, adding that vets were able to save Columbia. “It’s nice to have a living ambassador that’s a survivor of that as well.”