Feeding Our Future sought Minneapolis aid with the state 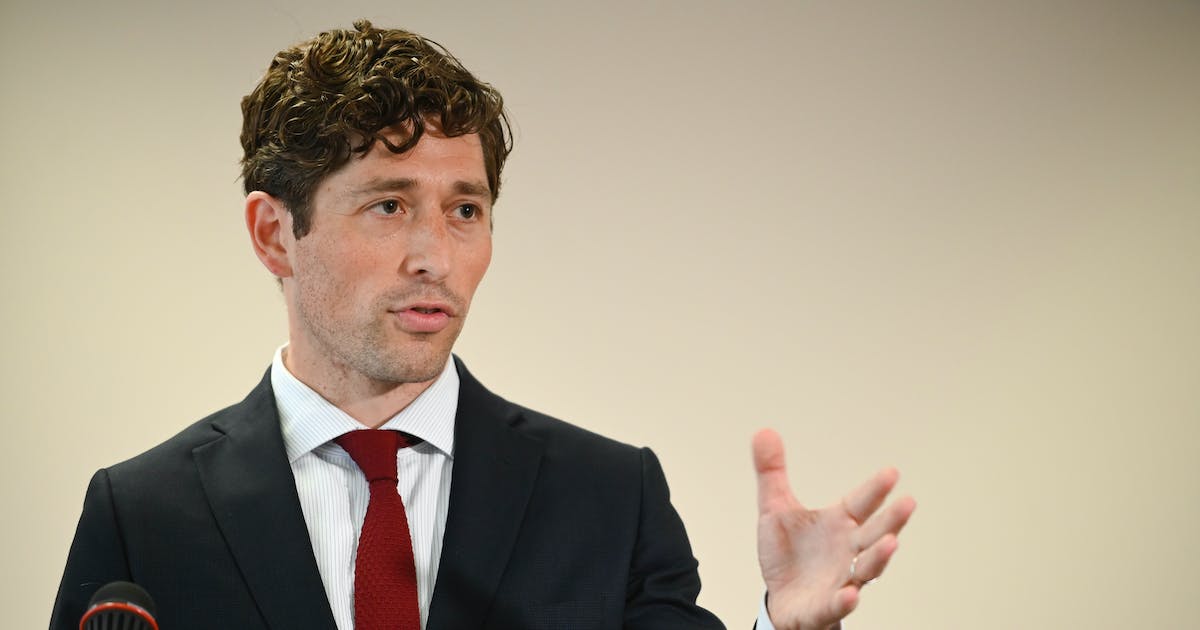 Before sitting down with state officials last year to discuss a meals program that is now under federal investigation for fraud, Minneapolis Mayor Jacob Frey was provided with a list of talking points that came from the woman at the heart of the alleged conspiracy, according to newly released records.

Aimee Bock, executive director of Feeding Our Future, drafted a set of talking points for city officials to use during a May 14 meeting with Heather Mueller, commissioner of the Minnesota Department of Education (MDE), records show. At the time, the department had stopped all payments to Feeding Our Future over concerns about what it called the organization’s “rapid” and “unexplained growth.”

Bock’s main contact at city hall, according to the records, was Abdi Salah, a former aide to Frey who was fired in February.

In January, the FBI raided the offices of Feeding Our Future and some of its contractors after accusing the group of defrauding two federally funded programs that provide free meals to needy children. Altogether, the FBI maintains that Feeding Our Future and its partners stole more than $40 million by inflating and even inventing reimbursement claims at dozens of meal sites across the state.

So far, no one has been criminally charged. Bock has denied wrongdoing.

In previous interviews, Bock said she reached out to several elected officials to request help after MDE stopped processing claims related to thousands of meals that had already been served by Feeding Our Future’s partners in 2020 and 2021. She said the department’s action threatened to put many minority-owned restaurants and food vendors out of business.

“Political leaders have been watching the way MDE is treating Feeding Our Future and, more importantly, the communities we serve,” Bock said in a January interview with the Star Tribune. “And they have been intervening and asking the questions that needed to be asked.”

In previous interviews, Frey and City Council Member Jamal Osman — who also attended the virtual meeting — said the May 14 discussion was focused on community concerns about the program and not specifically about Feeding Our Future.

But this week, after the city released more than 1,000 pages of internal communications and supporting documents in response to a Star Tribune public records request, Frey acknowledged that one of his former top advisers passed along information from Bock to use in the meeting.

However, Frey maintained that he did not know Bock and was not aware that the information was coming from her. He said he did not request the meeting with Mueller to intervene on Bock’s behalf.

“I learned Aimee Bock’ s name in the last three months,” Frey said Tuesday. “I couldn’t do her any favors if I didn’t know her and didn’t know who she was.”

Salah was fired on the same day the news broke that Salah had been named as a co-owner of two pieces of real estate the federal government wants forfeited because of the suspected fraud tied to the meals program.

However, city officials have not directly linked his termination to the ongoing investigation. Personnel records obtained by the Star Tribune show that Salah was fired for failing to submit a form disclosing outside employment and for not coming into the office as often as required.

Bock has said she didn’t talk to Frey about her concerns. She said she couldn’t remember who she spoke to on the mayor’s staff

“They were getting a lot of calls from community groups so they were relatively easy to get ahold of,” she said.

On April 29, Bock wrote an e-mail to Salah containing the text of a proposed City Council resolution that questioned MDE’s commitment to minority children and business owners, records show.

The resolution called on MDE to “review its practices to ensure it is treating all Minneapolis children equitably and equally” and that the department is “taking all reasonable steps” to maximize participation of minority businesses in the meals program.

Salah sent the proposal to Osman, who offered to introduce it at an upcoming City Council meeting, records show. Osman’s version of the resolution is almost identical to Bock’s initial proposal, records show.

Osman was prepared to introduce the resolution when his policy aide, Sean Broom, convinced him to wait until after the May 14 meeting with MDE officials, records show. The resolution was never introduced or approved.

In 2019, Osman incorporated Stigma-Free International Inc. with three other people. Stigma-Free became one of Feeding Our Future’s biggest contractors. In search warrants, the FBI accused Stigma-Free of misappropriating $6.5 million through the federal program. Osman said he “gave up” his role in the nonprofit in 2020, before Stigma-Free became active in the meals program.

In a written response to questions, Osman said he was willing to support the resolution to address concerns expressed about the meals program by “community members and food service providers.”

“I had never heard of the group ‘Feeding Our Future’ before the raids earlier this year,” Osman said in his statement. “I have never met or communicated directly with Aimee Bock in any capacity that I am aware of, and I had no knowledge of her drafting the resolution before last week.”

Bock played a significant role in shaping the briefing memo prepared for Frey in advance of the May 14 meeting, records show. The day before the meeting, she sent Salah an e-mail that encapsulated her dispute with MDE, claiming that the shutdown of her program meant more than 75,000 children in Minneapolis “are going without food.”

In a briefing memo aimed at preparing Frey for the meeting with Mueller, eight of the talking points come directly from Bock’s e-mail, in many cases using the exact same language, records show.

Frey said he doesn’t recall talking about Feeding Our Future in the meeting. Though he said he often quotes from prepared talking points in meetings, Frey said he does not recall relying on Bock’s information during the meeting with MDE officials.

“Obviously, knowing what I know now, this is beyond frustrating — because the underlying allegations are appalling,” Frey said. “Our goal all along was to make sure that kids experiencing food insecurity had food. That was the goal in taking the meeting.”

Frey said there was nothing unusual about Bock’s access to his staff since his advisers routinely seek out and share information they receive from business owners and others to help him prepare for meetings.

Frey received campaign contributions from six people named in the search warrants. A campaign spokesman said Tuesday that the mayor has set the money aside and plans to return it to the federal government so the money “can be used for its intended purpose.”