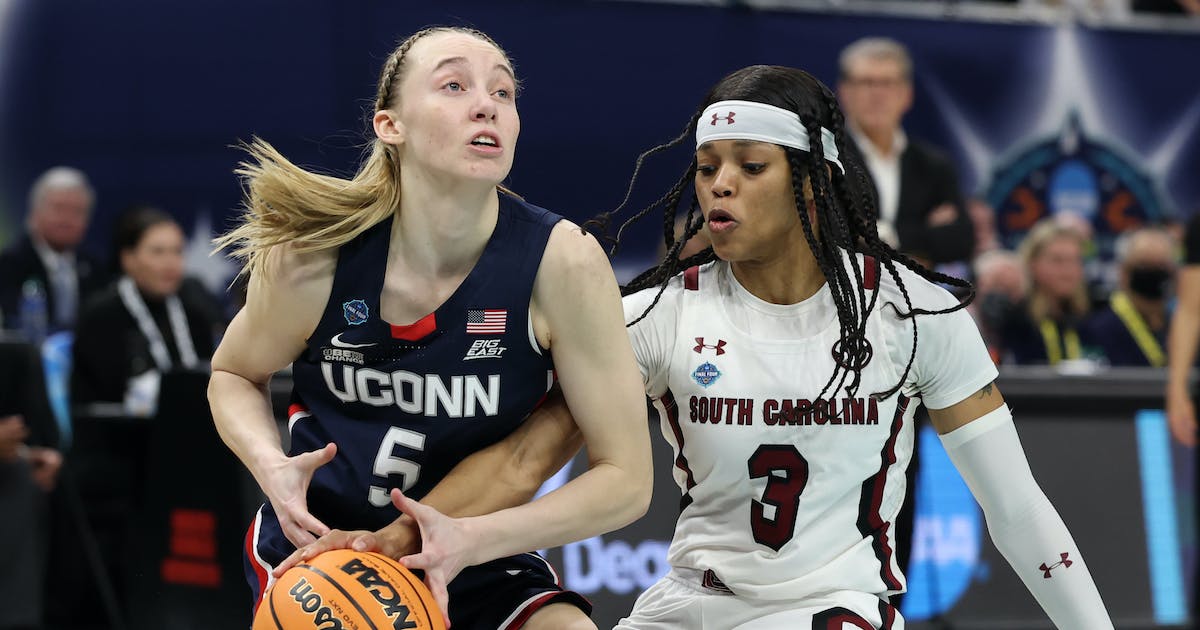 NCAA Women’s Final Four fans made their way out of town Monday after a resounding South Carolina victory and a full weekend of activities that brought celebration back to the streets of downtown Minneapolis.

“It was our opportunity, and we took advantage of it. It really came at a good time,” said Steve Cramer, CEO and president of the Minneapolis Downtown Council. “We’re struggling to not only come out of COVID but the reputational impact” of George Floyd’s murder and the aftermath.

Local hero Paige Bueckers’ Connecticut Huskies didn’t leave with the championship trophy, but by most accounts her hometown and her sport fared well.

“I could not have written it any better,” said Wendy Blackshaw, CEO and president of Minnesota Sports and Events (MNSE), which organized the Final Four weekend.

Blackshaw was beaming about a weekend headline in the New York Times: “Minnesota, a Mecca of Women’s Basketball, Is Having Its Moment.”

“That was a big deal because the recent headlines have been difficult for Minneapolis,” she said.

For most of the past two years, the Times’ reports on Minneapolis have been about tragedy: Floyd’s murder at the hands of police officers in May 2020, the trials of the four former officers, the shooting of Daunte Wright by a Brooklyn Center police officer in 2021 and that officer’s trial and conviction.

But early last week, the focus turned to women’s basketball as coaches and fans arrived for the games, exhibitions and celebrations. Visitors turned up at downtown restaurants, for the fan expo Tourney Town at the Minneapolis Convention Center and a Title IX event at the Mall of America. More than 36,000 fans filed into Target Center for the three basketball games.

On Sunday morning, some 2,300 kids and their parents dribbled NCAA-branded basketballs (that they got to keep) around the Convention Center, in the traditional “Final Four Bounce.”

Sree Clayton, 11, of Atlanta cradled one of those basketballs against her hip as she walked to Target Center before Sunday night’s game with her mom, Pasha. The Claytons were focused on tournament events all weekend but planned to hit the Mall of America before flying home Monday.

“We kind of did a last-minute trip. She was supposed to play basketball this weekend, and it got canceled,” Pasha Clayton said. “We’re both excited to see Paige play.”

About 1,000 volunteers were on hand to welcome an anticipated 30,000 visitors to the city. Blackshaw said MNSE will have results from an economic impact study of the event within a couple months. Her organization, which is privately funded, did not release the cost of the event.

Cramer acknowledged that the tournament was just part of the solution for Minneapolis but said downtown hotels were filled for the weekend. The reviews were mixed at restaurants and bars.

“It was our normal busy weekend in the North Loop,” said Josh Thoma, co-founder of the Smack Shack at 603 N. Washington Av. Thoma said he saw a little bit of a bump in traffic, but nothing appreciable.

“We do see a bump for Twins traffic because we’re just down the street from Target Field,” he said. “We’re looking forward to Thursday.”

That’s when the Twins’ home opener is scheduled, though the team may push the game back to Friday if the weather looks bad. A year ago, the Twins were preparing for a home opener limited to 10,000 fans because of COVID-19. There are no such limits this year.

George Maus, manager of MacKenzie Pub at 918 Hennepin Av., said the Minnesota Timberwolves’ success has brought strong business to the bar, and he’s eager for the return of the Twins. MacKenzie’s is close to Target Center and Target Field.

Warmer weather will draw people to MacKenzie’s outdoor dining area, but Maus said the most significant factor will be the return of downtown employees who have been working from home during the pandemic for most of the past two years.

“Our lunches are really hit or miss,” he said. “We need more foot traffic downtown.”

Cramer agreed that the return of workers and weekday business travel is critical for bars, restaurants and hotels. He said the Final Four weekend was part of the “upward momentum” that broke down “outsized” misperceptions about the “safety and environment” of downtown.

Blackshaw said she hopes to soon announce more sports events coming to the Twin Cities and believes the Final Four will help make the case for choosing Minneapolis.

“All in all, it was the next step in healing and recovery,” she said.