Finding the story behind what may be Minnesota's oldest rifle 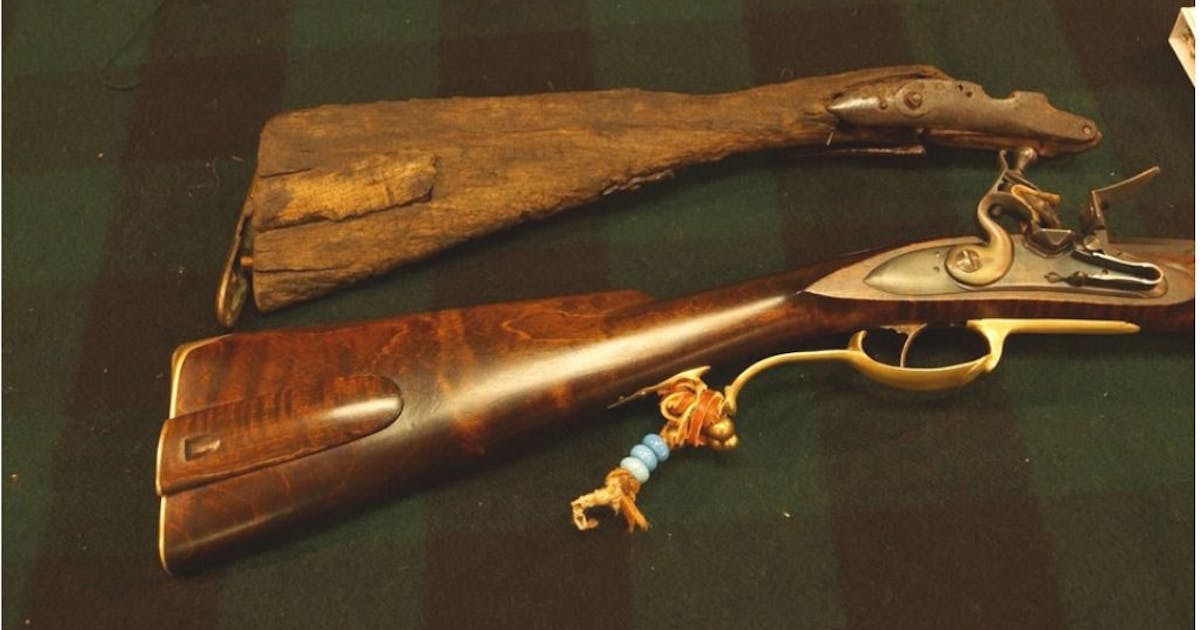 Close to a century ago — probably in fall 1934, when Dust Bowl droughts had lowered the water levels of Lower Hay Lake by 6 feet — a man named F. T. Gustavson found what looked like an old rifle stock on the shoreline of the lake about 30 miles north of Brainerd.

That rifle stock eventually made it to the Crow Wing County Historical Society. In the 1980s the museum asked Ray Nelson, then a park ranger at the U.S. Army Corps of Engineers Cross Lake Recreation Area, to take a look at their collection. Nelson had been an fan of muzzle-loading firearms since childhood, when he watched television shows from the fur-trading era and idolized characters such as Davy Crockett and Daniel Boone. He’d become an amateur gunsmith and historian, and he loved historical reenactments.

In a box, he found Gustavson’s gun stock.

“I thought, ‘Wow, that sure is different and unique-looking compared to anything else that would typically be here in the Crow Wing area,” he said. “And I got inquisitive and curious about it.”

That spark of curiosity has led Nelson on a decades-long hunt to determine the provenance of what he believes to be the oldest gun relic ever found in Minnesota. He believes the gun stock, or parts of it, could be as old as the 1700s.

Over the years, Nelson has gathered a number of clues: A banana-shaped flint gun lock plate popular in early 1700s European locks. An unusual flat brass sideplate that looks like an engraved serpent. A trigger plate shaped like a teardrop and typical of old French or Dutch guns. A wood stock made from birch.

“It looks like a piece of wood that’s been laying in water and deteriorating for lots of years,” said Nelson, now of Ironton.

He found an article by the Minnesota Historical Society about an 1837 migration from Norway to New York. One immigrant wrote a 49-page booklet for fellow Norwegians interested in migrating to the United States, and recommended they bring spare rifles and resell them for $15 or $20.

To Nelson, this gun stock isn’t just a gun stock. It’s an artifact with any number of potential stories inside.

Nelson has come up with a few.

Could it have been one of the 50 rifles stored in the Tower of London then sold to American fur traders in 1762?

Was it used by Ojibwe hunter Nokay in the late 1770s in his renowned one-day hunt near Crow Wing, when he bagged 16 elk, five deer, four buffalo, three bears, one lynx and one porcupine?

Was it a gift in the 1775 treaty between the Ojibwe and Dakota? Or used in the 1800 Battle of Crosslake between the two tribes? Or given to a Native American chief in 1828? Or owned by a Scandinavian or German laborer working at the Crow Wing Indian Agency or as lumberjack in the 1850s?

“I thought the journey was going to be short: somebody would tell me what it is, then end of story,” Nelson said. “But I’ve kind of been drawn along, like reaching for that carrot on a stick.”

“I can go to those years, tell you a story that’s factual history, and it could have been this very rifle artifact,” he said. “But you can’t pinpoint it. It’s a fun curiosity. And I don’t know anybody else crazy enough to do this.”