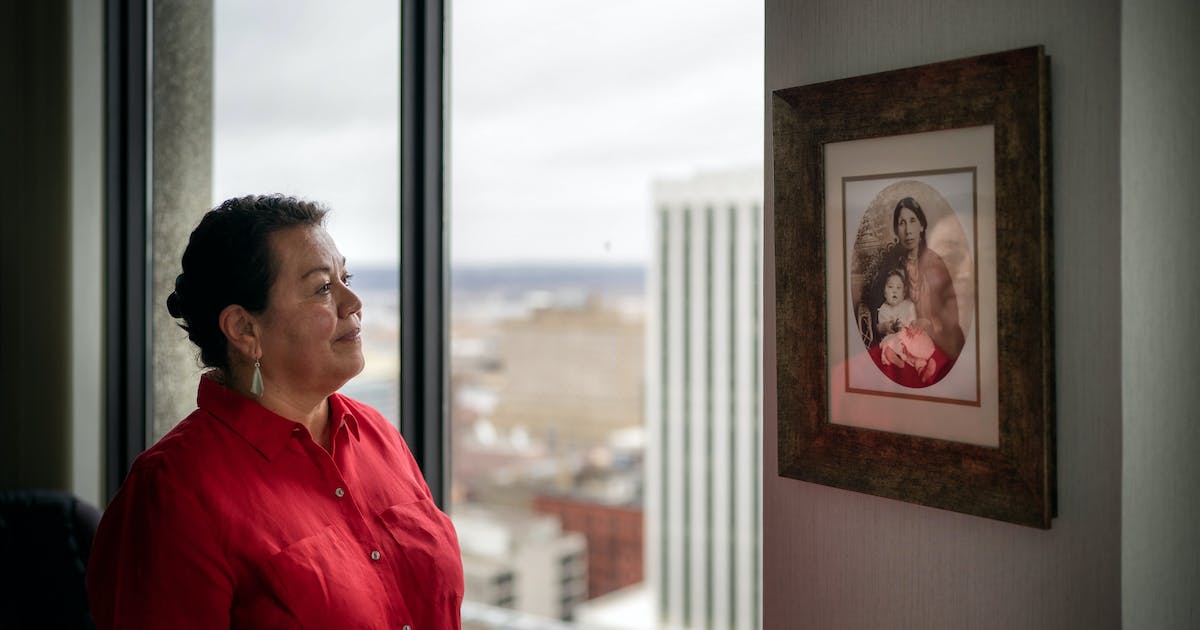 Not long after taking the job to lead Minnesota’s new Office for Missing and Murdered Indigenous Relatives, Juliet Rudie got a call from someone in her own family.

A cousin disappeared in 2017 without a trace. The family was still getting leads and looking for answers.

The call underscored a devastating reality for Native Americans in Minnesota and across the country: Most know someone who went missing and was never found, or was eventually found murdered. Now it’s Rudie’s job to lead the first state office in the nation tasked with systemically trying to fix the problem, one that’s been obscured for decades by inconsistent data and a lack of mainstream attention.

“This issue is very personal to me, it’s personal to a lot of people,” said Rudie, a member of the Lower Sioux Indian Community who worked for decades in law enforcement. “When this opportunity came up, I thought, I have to do more.”

The office has a huge task ahead, including wrangling missing person reports across many agencies and databases, fielding calls on active and cold cases and establishing protocols to try and prevent others from disappearing without a trace.

“For far too long Native women have been, at best, invisible, at worst, disposable. This office makes me feel like that’s changing,” said Lt. Gov. Peggy Flanagan, a member of the White Earth Band of Ojibwe and the first Indigenous Minnesotan elected to executive office in state history. “Ultimately my hope is this office is not just a moment in time, but we can harness the power of this visibility and awareness and bipartisan support for this work to turn the tide on this issue.”

While recent statistics on missing and murdered Indigenous relatives are staggering, current missing persons databases are widely considered by advocates to be just a partial record. Many cases are never reported or are misclassified by law enforcement. Jurisdictional confusion between state and federal offices and Minnesota’s 11 sovereign tribal governments has resulted in many cases falling through the cracks.

In 2019, Minnesota’s divided government created a task force that spent more than a year digging into the epidemic of missing and murdered Indigenous women. The first mandate in the task force’s 163-page report was to create an office dedicated to working on the issue, which lawmakers passed last year as part of the state’s two-year budget.

Rudie brings to the role 28 years of experience in city and county law enforcement, starting as a patrol officer in St. Paul in 1990 and working her way up to sergeant. When she was hired, she was the only the 38th woman to ever work in the department.

“We’re very good communicators,” Rudie said of women on the force. “I believe we can take care of business by communicating with people, talking, problem solving. Women bring that to the table.”

Communication skills will be critical in her new job, which Rudie sees in part as a facilitator of conversations between families, law enforcement, agencies, tribal governments and community groups.

One of her first goals is to develop a protocol for reporting missing and murdered Indigenous women and children. Ideally, that will help law enforcement do a better job of asking victims and their families the right questions, while also educating tribal communities on where to go when someone goes missing.

“Families who testified during the task force said that lack of understanding, that lack of communication, the confusion and feeling their loved one was forgotten was a prevalent thing over and over again,” said Sheila Lamb, an Indigenous Cloquet city councilor and task force member. “Having this office in place means there is centralized communication and a place where families can go.”

Rudie has seen the names of the missing people. Some have been missing for decades or years, like Sheila St. Clair, last seen in Duluth’s Central Hillside neighborhood in 2015. Fifteen-year-old Nevaeh Kingbird hasn’t been seen since October.

Nicole MartinRogers, a research scientist at Wilder Research who wrote the task force report, stressed that the 20 mandates also try to tackle what causes so many Native relatives to go missing or be murdered.

Rudie says she’ll use the task force report as her blueprint on the job. Lawmakers in states such as South Dakota and Colorado are already following Minnesota’s model and introducing legislation to establish their own offices. By the end of the year, Rudie hopes to hire three more people to help with the workload.

She’s been on the job for just a few weeks, and her office in downtown St. Paul is austere. From her window, she can see Indian Mounds Park across the Mississippi River, where her ancestors in the Kaposia band had a seasonal village before being driven out by white settlers.

The only thing hanging on her walls is a sepia-toned photograph from 1920 of her great-great grandmother holding her infant grandmother, who grew up to be a medicine woman. They serve as her inspiration.

“She was a medicine woman and helped women have their babies. People could go to her,” said Rudie. “I want to do whatever I can to help Native women and children.”