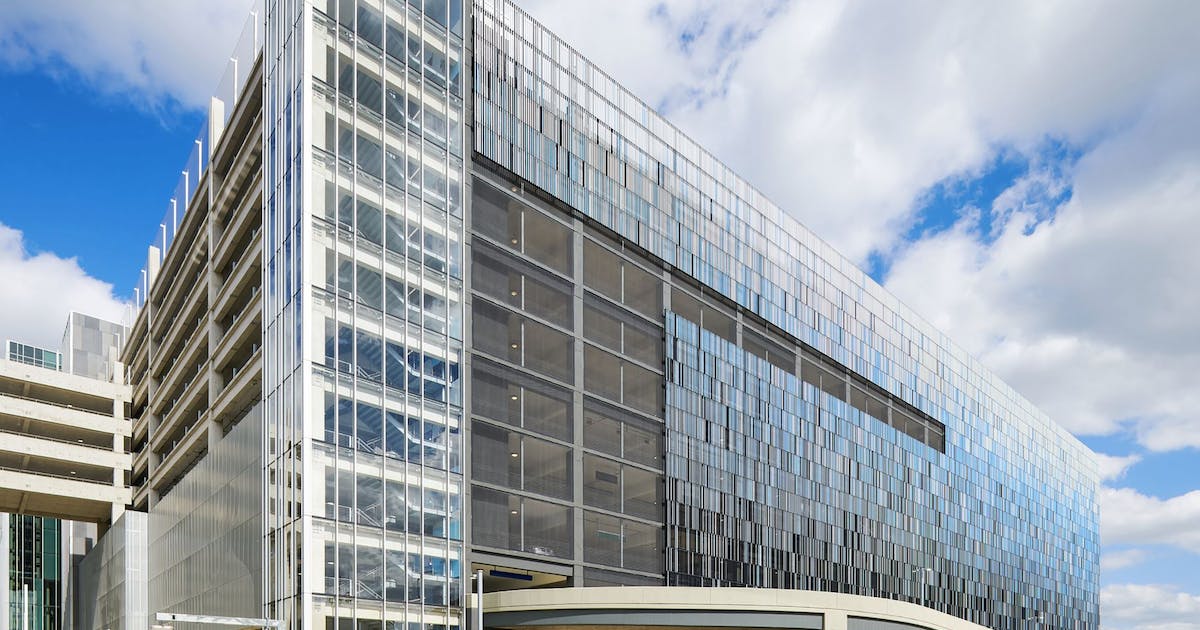 A Metropolitan Airports Commission (MAC) committee on Monday unanimously approved a measure to fire the original contractor for the $245 million ramp and hire a new firm to fix issues that cropped up during construction.

The glittering Silver Ramp at Terminal 1 is hard to miss from Hwy. 5. The 11-story structure added 5,000 parking spaces to the airport complex, a new rental car hub, and a transit center for buses, shuttles, bicycles and light-rail.

“It truly is a beautiful structure, and with multi-modal capabilities it will benefit travelers going forward for many, many years,” said Bridget Rief, the MAC’s vice president of planning and development, during Monday’s meeting.

The Silver Ramp has drawn many accolades, including the Grand Award from the Minnesota chapter of the American Council of Engineering Companies, which noted the building’s “exceptional innovation, complexity, achievement and value.”

One of the structure’s most-distinctive elements is its façade, which uses special tubes that feature darker colors near the ground and lighter tones at higher levels. On sunny days, the building seemingly fades into the sky. And it features Minnesota’s longest escalator at 56 feet, besting the one at the Guthrie Theater in Minneapolis.

But some issues have been cropping up since construction began in 2017.

In more than 100 locations between the second and 11th floors, water that failed to drain properly accumulated in small “ponds” until it evaporated, MAC officials said.

In addition, concrete barrier posts along the rim of the structure — intended to prevent vehicles from plunging off the parking deck — were constructed “in such a way that they hold water,” Rief said. With Minnesota’s harsh climate, a freeze-thaw cycle inevitably occurs, causing cracking.

None of the issues threaten the ramp’s structural integrity. But MAC officials said they need to get them fixed in a timely fashion — and before next winter.

So they chose to take the unusual step of recommending that the commission terminate its contract with the project’s main contractor, PCL Construction Services Inc., a global firm with an office in Edina. It’s the first time the MAC has severed a contract of this sort in more than 20 years.

“This is a significant action,” Rief said.

Since 2019, MAC and PCL officials have engaged in weekly negotiations and mediation but haven’t been able to resolve the issues, Rief said. Representatives from PCL could not be reached for comment.

“Is this the end of the world?” Rief asked. “No. But it absolutely needs to get fixed and we want to pay for work that is done correctly.”

The MAC’s Planning, Development and Environment Committee on Monday recommended awarding a $2.4 million bid to Restoration and Construction Services of Clearwater, Minn., to fix the issues. The amount is less than 1% of the ramp’s construction budget, which is funded by airport revenue bonds and customer facility charges.

The Silver Ramp’s challenges come as air travel continues to recover from the pandemic downturn, when many travelers stayed close to home. Parking in the ramp wasn’t available until Feb. 28, as the spring break rush began.

“There have been multiple times in the last five weeks that the other Terminal 1 ramps reached capacity,” MAC spokesman Jeff Lea said in an e-mail. “The Silver Ramp has been able to accommodate the overflow.”