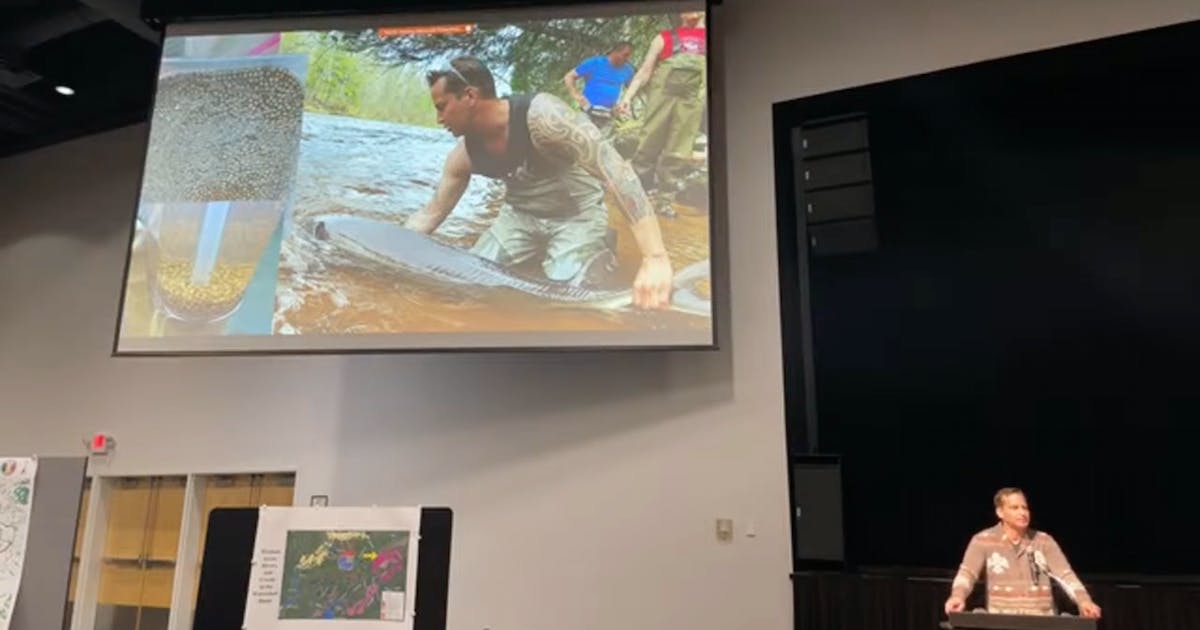 A photo of wild rice, wild blueberries and a jar of maple syrup flashed onto a large screen in a conference hall.

Pointing up at it, Thomas Howes, natural resources program manager for the Fond du Lac Band of Lake Superior Chippewa, said these were some of his tribe’s traditional sustenance at risk from mining runoff. And it’s personal.

“This is literally the composition of my daughter’s first solid meal,” Howes said.

It was a poignant moment in an otherwise technical U.S. Army Corps of Engineers hearing ending Thursday about whether mercury and other pollutants from PolyMet Mining’s proposed $1 billion copper-nickel project in northeast Minnesota would affect the downstream Fond du Lac Band.

It’s rare for a tribe to challenge a wetlands destruction permit as a downstream state, but in this case the tribe has a significant ally: the U.S. Environmental Protection Agency (EPA).

The PolyMet mine project, which would be Minnesota’s first hard-rock mine, has already stalled with major permits under review or in litigation. The dredge-and-fill permit that is at issue is suspended.

The EPA recommended during the hearing that the Army Corps of Engineers not reinstate the wetlands permit. The EPA, acting as a science adviser to the Corps, said there are “no conditions” that could be put on the wetlands permit to ensure mine discharge would comply with the tribe’s water-quality requirements, as the law requires.

The mine would be a “significant potential source of mercury” to the St. Louis River watershed, said Tera Fong, director of the Water Division at EPA Region 5 in Chicago.

In a statement outside the hearing, the band applauded the EPA recommendation as a “great victory” in its fight to protect the waters its people rely on for fishing, hunting and gathering wild rice. During the hearing, band Chair Kevin Dupuis Sr. urged the Corps to revoke the dredge-and-fill permit.

“As you heard from our experts, the science is clear,” Dupuis told the Corps. “The discharges from the proposed PolyMet project will violate the band’s downstream water quality standards and create negative impacts to the band’s downstream reservation water areas and other treaty resources and cultural resources.”

The band, with about 4,200 members, is one of more than 70 tribes around the country with federally approved water-quality standards. It is already a sovereign nation, but the standards also give the band the authority of a “downstream state” under the Clean Water Act.

The Corps of Engineers will make a decision to reinstate, revoke or modify the wetlands permit. The outcome will likely be appealed and poses another hurdle for the stalled project.

The permit was originally issued in 2019 for PolyMet to dig a mine pit and stockpile waste rock on 900 acres of wetlands that were once part of Superior National Forest. The wetlands drain to the Partridge and Embarrass rivers, tributaries of the St. Louis River. To offset the loss, PolyMet was required to pay for the conservation of 1,300 acres of wetlands elsewhere in St. Louis County.

The band had to litigate in federal court to get the required hearing after federal agencies ignored its objections to the wetlands permit, Vanessa Ray-Hodge, an attorney for the band, said. Most of the hearing took place on the Fond du Lac reservation, livestreamed for the public.

Technical experts for both the band and PolyMet offered starkly different assessments of the downstream threat from mercury, methylmercury, sulfate and conductivity — the band’s key water pollution concerns at issue.

Sulfate is a chemical that occurs naturally but is also discharged by mines and power plants, among other polluters. It turns into sulfide in the mucky bottoms of waterways and wetlands, and damages wild rice plants.

High concentrations also speed the conversion of mercury into the most toxic form of the metal, which accumulates in fish and other wildlife and winds up in humans who eat them. It’s a potent neurotoxin that can cause brain damage in babies.

Most Minnesota waters are already impaired by mercury but levels in fish in the St. Louis River are exceptionally high, state regulators have found. Both tribal and state health officials have issued advisories against eating too much fish from those waters.

A decade ago researchers found that 1 in 10 infants born along Minnesota’s North Shore have unhealthy levels of mercury in their bodies, likely from their mothers eating contaminated fish. Most of the mercury in Minnesota floats into the state on the air from power and manufacturing plants as far away as China but a good deal also comes locally from mining and mercury in products.

Conductivity refers to dissolved ions from certain compounds in the water that conduct electricity, harming aquatic organisms such as caddisflies, a fish food.

PolyMet said the mine won’t result in elevated mercury, methylmercury, sulfate and conductivity downstream because the tribe’s reservation is too distant, and because it has a robust water management plan to capture and treat run-off and seepage from its operations. In fact, the system will reduce mercury and sulfate loading in the watershed, it said.

The Fond du Lac Band’s scientists testified that years of research and analysis show the pollutants in the discharge will not only reach the reservation but exceed the band’s water-quality standards. It has documented the toxic effects of sulfate from mining operations on wild rice and how it increases the methylization of mercury, said Nancy Schuldt, the band’s water projects coordinator.

Howes, the band’s natural resources program manager, testified that the band is fighting hard to protect the environment of the reservation and ceded territories to its own standards. He illustrated how the band relies on nature with a slideshow that featured black-and-white photos of his grandfather with a string of fish, of his grandmother holding a large basket and many tribal members harvesting wild rice and fishing.

Written comments will be accepted until June 6 and can be sent to usace-PolyMet-401a2@usace.army.mil or to the U.S. Army Corps of Engineers, St. Paul District Regulatory Division, Suite 700, ATTN: Desiree Morningstar, 180 E. 5th Street, St. Paul, MN 55101.

Correction:
Previous versions of this story had an incorrect title for Christie Kearney. Kearney is PolyMet’s vice president of environmental affairs.