For Minneapolis North students, graduation this year comes with $10,000 scholarships 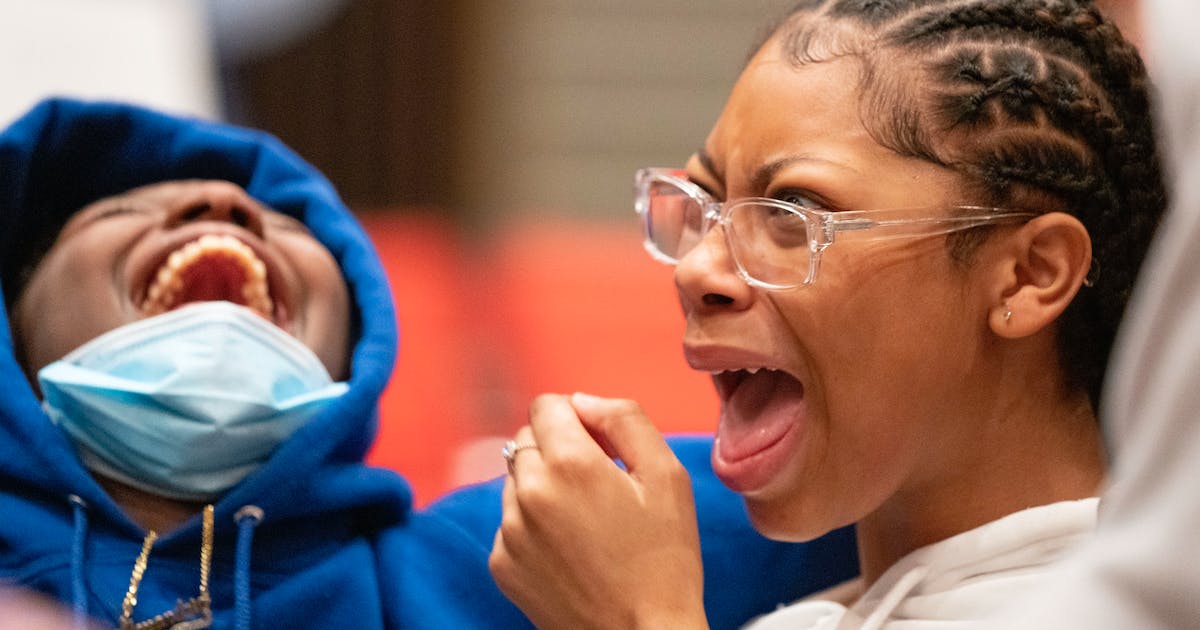 The graduating seniors ushered into North High’s auditorium Friday afternoon didn’t initially know the purpose for the assembly. They were greeted by blaring music, bouquets of balloons and “congrats” spelled out in lighted letters on the side of the stage.

Still, the energy in the room didn’t erupt until Adair Mosley of Pillsbury United Communities announced the reason for the surprise gathering: Each North High graduate this spring will receive a $10,000 scholarship along with their diploma.

The $1 million North High Scholarship Fund will support the 100 or so North seniors on track to graduate. That money can be used toward the college or post-secondary training programs of their choice.

The students jumped from their seats and started screaming when they heard the news. They hugged each other and then turned to their phones to tell family and friends.

Ronaiya Bickham immediately called her mom and was wiping tears as she explained the scholarship, which she plans to use along the path to medical school.

“This means so much,” the aspiring surgeon said. “I can’t believe it.”

Pillsbury United Communities chose to support North students because of the many challenges they’ve faced in their high school career: the pandemic, the murder of George Floyd and resulting unrest, and violence in North Side neighborhoods. In February, Deshaun Hill Jr., North’s starting quarterback, was shot and killed less than a mile from the school.

That “compounding grief and trauma” came during what is supposed to be a celebratory time in teenagers’ lives, said Mosley, CEO and president of Pillsbury United Communities.

“All students have experienced a combination of those things, but North High was uniquely experiencing all of them,” he said. “This was about how we could send a shockwave of hope to this class of students.”

Principal Mauri Friestleben prefaced the announcement by telling the three dozen students gathered in the auditorium that she was proud of them.

“You are not victims, you do not need to be pitied,” she said. “You do need to be honored, loved on and lifted up. You deserve every ounce of love coming your way.”

Though Pillsbury United Communities has offered scholarships for more than 25 years, this is its first scholarship program offered to an entire class of students. And it doesn’t require an application or come with the types of conditions that often accompany such funds.

“Making a direct investment in someone and looking in their eyes to say ‘I believe in you’ is a really powerful thing,” Mosley said.

Senior Jordana Ortiz said the news eases her stress over the cost of pursuing her dream of becoming a pilot, especially after realizing she didn’t qualify for many scholarships.

The fund is modeled in part after scholarships offered through Hope Chicago and Hope Toledo, organizations that aim to eliminate barriers to higher education and provide economic support for students and their families to seek post-secondary opportunities.

At the assembly, Mosley encouraged students to return to North Side neighborhoods after college to continue the process of building a strong community.

“Hopefully this investment comes back 100-fold,” Mosley said in an interview this week. “While this is not the panacea, we know that education is one of the most important ingredients to creating the kind of change we seek.”

Isaac Hill said the scholarship likely changes his plan to take a gap year before pursuing secondary education. Students will have up to a year to determine their plans to use the scholarship money, but Hill is already thinking he might want to take college courses in youth development, business or maybe sports medicine.

“I’m just so thankful,” he said. “We have faced a lot of struggles as a community. This is a really nice way to reward us for working hard and sticking with school through it all.”