Fourth-grade class in Austin makes a difference — with trees 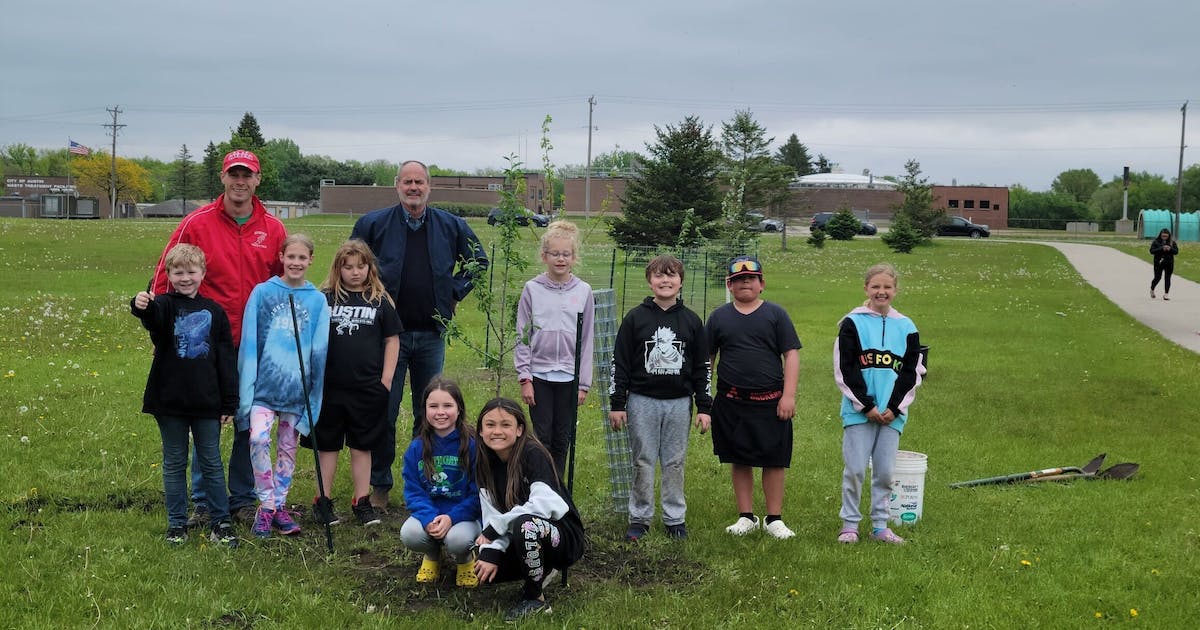 Mr. Timm’s fourth-grade class at Southgate Elementary School in Austin has a bunch of ordinary fourth-grade kids filled with idealism about the possibilities of the world.

Kids like Spencer Riedel. The 10-year-old enjoys playing outside and climbing trees, drawing and reading books, especially “Calvin and Hobbes.” When he grows up, he wants to be a pastry chef, and he has lots of ideas for cool desserts.

Early this school year, Mr. Timm, whose real name is Ryan Timm, assigned a book to his class. The book was titled “We Can Make a Difference,” and on the cover was a photograph of a 40-pound cabbage. The big cabbage was pretty funny, but after Spencer read the book, he said he felt pretty sad.

The book was about Katie Stagliano, who as a third-grader grew that cabbage in her backyard way back in 2008, before Spencer and his classmates were born. Katie donated that cabbage to a soup kitchen in her home state of South Carolina.

That’s where the story really started. They made her cabbage into a soup, and the next day Katie returned and served soup to 275 hungry people. That kicked off an organization called Katie’s Krops, a youth-based group for gardens around the U.S., that grows healthy foods and donates to families in need.

“The book made me feel a little sad that hunger was everywhere,” Spencer said. “It showed how one in five of every Americans is struggling with hunger.”

Lots of Spencer’s classmates felt the same way: sad about the state of the world, inspired to do something about it.

They’re not really sure who the idea started with, but the class asked Mr. Timm: Could we plant a community garden?

“A garden you have to plant every year,” Mr. Timm told them. “Do you want to commit to this every year for the rest of your lives? How about a community orchard?”

That was a good point. An orchard lasts a very long time.

The class was learning about government, too, so when Austin’s mayor visited the class, students presented him with a proposal. The mayor invited the class to a City Council meeting, and the council unanimously approved their orchard proposal, maybe because 10 kids showed up at the 7 a.m. meeting, which is very early, especially on a Monday.

The idea was to put it by a bike path, near where lots of children from the school live. The trees would provide shade, plus food for the hungry. All five fourth-grade classes brought in spare change, and $340 was raised to buy a variety of trees, not just apple trees. Mr. Timm pointed out orange trees probably wouldn’t do well in Minnesota, so they settled on two apple trees, a plum tree and an apricot tree, which is a fruit some of them hadn’t heard of.

Berg’s Nursery gave the class a deal on the trees — half price — and advice on planting, fertilizing and keeping deer away.

On Thursday afternoon, Mr. Timm’s class went down by the bike path and planted the community orchard.

“We wanted to make a difference,” said Colton Tabor, age 10.

“It was 100% student-led,” Mr. Timm said. “That’s the main reason I did it. These kids know they can develop a plan, put it in action and make a difference. You can dive deep into what interests you. Honestly, the lesson is just that learning is fun.”