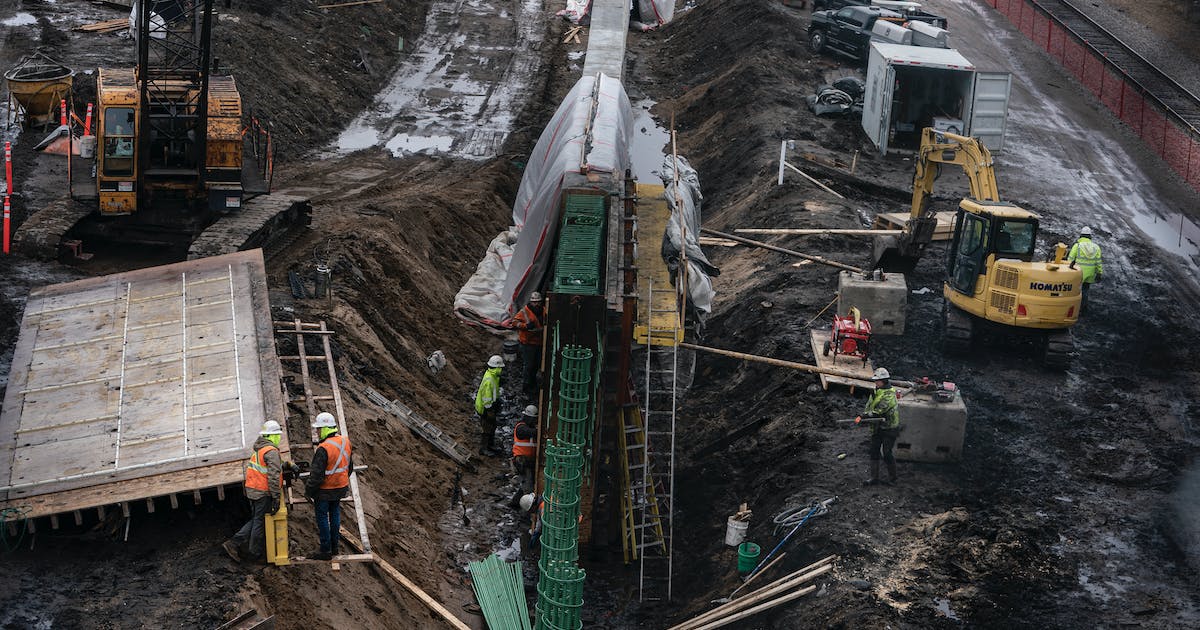 Transit planners say it could take as much as $550 million to complete the troubled Southwest light-rail line — already the state’s most expensive public works project with a potential total cost of $2.75 billion.

But where will the Metropolitan Council and other funders dig up a half-billion dollars to get the job done?

Met Council Chair Charlie Zelle says the cash needed to complete the 14.5-mile line between Minneapolis and Eden Prairie likely will come from different sources, including the federal government and Hennepin County.

But there isn’t a detailed roadmap for backfilling the Southwest project’s immense shortfall.

“We are committed to finding a solution, but the total puzzle has not been solved yet,” Zelle said in an interview. “I don’t think there’s any shortage in commitment because [Southwest] is just too important for the region.”

Hennepin County has already contributed more than $1 billion — about 90% of the local share — to help build the Southwest line, which will operate entirely within the county’s borders.

But County Board Chair Marion Greene indicated in a statement that others need to open their wallets as well.

“We cannot cover these additional cost increases alone,” Greene said. “It is not tenable for Hennepin County taxpayers to continue to be solely responsible for completing the largest infrastructure project in Minnesota history. It’s time for other partners to step forward with a comprehensive funding solution that acknowledges the statewide significance of this project.”

Greene and the rest of the county board declined to be interviewed for this story.

On Wednesday, the Met Council took what it said was an important financial step that symbolized its support for the light-rail line. A complex budget maneuver bolstered by federal COVID-19 relief money calls for a transfer of $80 million into the Southwest account.

But $30.5 million of that amount is slated to come from Hennepin County — a move the county board needs to approve first. It’s unclear when that will happen.

“Although $80 million isn’t the total solution, it is a pretty strong level of payment that shows our commitment and leadership to explore a number of sources,” Zelle said.

But in the broader scheme of things, it’s a relatively small amount of money — just 15% of what the council needs to shore up Southwest’s budget.

So the question Rep. Paul Torkelson, R-Hanska, asked during a recent hearing at the Capitol still holds true: “Chair Zelle, where the heck are you going to get the money?”

Later, Torkelson characterized the exchange as “bizarre. The council seems to be proceeding full speed ahead without a funding source. It’s alarming in so many ways.”

Following a year of uncertainty, the council in January said the Southwest project will cost between $2.65 billion and $2.75 billion, up from the previous price of $2 billion. And the line is now expected to begin passenger service in 2027, four years behind schedule.

The council blamed the bloat on a tunnel in Minneapolis’ Kenilworth corridor, an unexpected $93 million crash protection wall separating freight and light-rail trains west of Target Field, and the addition of a station in Eden Prairie, which had been cut seven years ago in a previous bout of budget woes.

The cost overruns and delays have exasperated even the most ardent public transportation supporters. Sen. Scott Dibble and Rep. Frank Hornstein, DFL-Minneapolis, led the bipartisan charge at the Legislature, calling for the project to be investigated by the state Office of the Legislative Auditor. The bill was signed by Gov. Tim Walz on Thursday.

The lawmakers pushed for the audit after $200 million of contingency funds from Hennepin County were tapped by the project last summer following a series of cost overruns. The money came from a half-cent transportation tax levied by the county that generates about $135 million annually.

But county officials said recently revenue from the sales tax fund will be used to support other transit lines for the “foreseeable future.”

“This project is the biggest waste of money I’ve ever seen in my lifetime,” said Rep. Kurt Daudt, R-Crown, during a House floor hearing earlier this month. “Let’s just kill it and be done with it.”

In his rounds at the Capitol, Zelle has repeatedly noted that the project’s troublesome alignment wasn’t the council’s work. (It was the preferred route of Hennepin County and approved by Minneapolis, St. Louis Park, Hopkins, Minnetonka and Eden Prairie.)

Zelle also frequently notes the Blue and Green lines, which opened in 2004 and 2014, respectively, were finished on budget and on schedule.

In recent days, Walz has been asked whether Zelle is capable of wrangling the Southwest project to the finish line. The governor, who appointed Zelle, noted his experience, including a stint as commissioner of the Minnesota Department of Transportation: “At this point in time, the chairman is certainly the right person to be there.”

The state is not a major funder of the Southwest line, contributing $30 million to date.

Walz has set aside $200 million in his budget for the Bottineau Blue Line light-rail extension, which would connect downtown Minneapolis to Brooklyn Park. But no such largesse appears imminent for Southwest, despite a record $9 billion state surplus.

“I would say the likelihood is very slim for legislators, no matter what their political stripe or hue, to simply hand over money to the Met Council to do more of the same and paper over the huge mistakes they’ve made,” Dibble said.

Opponents of the Southwest line have called for the project to be shut down or paused, a move the Met Council says is too costly. The line is more than 60% complete, and about $1.4 billion has already been spent.

If the project is shut down, the council would have to pay back much of a $929 million grant from the Federal Transit Administration (FTA). To date, $203 million from the FTA grant has been funneled to Southwest, but the council has borrowed about $500 million against the federal loan to keep construction moving.

The grant is the maximum amount permitted, but other FTA funds could possibly be tapped.

Zelle frequently mentions Maryland’s Purple Line as a cautionary tale for pausing Southwest. The suburban line’s budget surged from $2 billion to $9.3 billion because of legal challenges and a contractor that quit. The project largely shut down for more than a year.

“You don’t need to go any farther to see what a project can turn into when it just stops,” Zelle said. “It wouldn’t be the most prudent thing to do to press pause. It’s not a tape deck; there are actual crews out there [working].”

Some elected officials in Washington, D.C., who represent Southwest’s service area say they’re on the lookout for federal funds, including money from the recently passed infrastructure law.

Sen. Tina Smith, D-Minn., is working with the council and Hennepin County “to explore options for additional federal funding,” according to a spokesperson.

And Rep. Ilhan Omar, D-Minn., said she’s “hopeful that we can provide the resources needed to fund the shortfall from the federal government.”

Several lawmakers have asked whether $550 million will be enough, especially if other problems crop up.

Last month, for example, residents of the Cedar Isles condominium complex — near Southwest tunnel construction in Minneapolis’ Kenilworth corridor — observed cracks in their walls and floors. The council hired a nationally known engineering firm to assess the damage.

The report is due any day now.