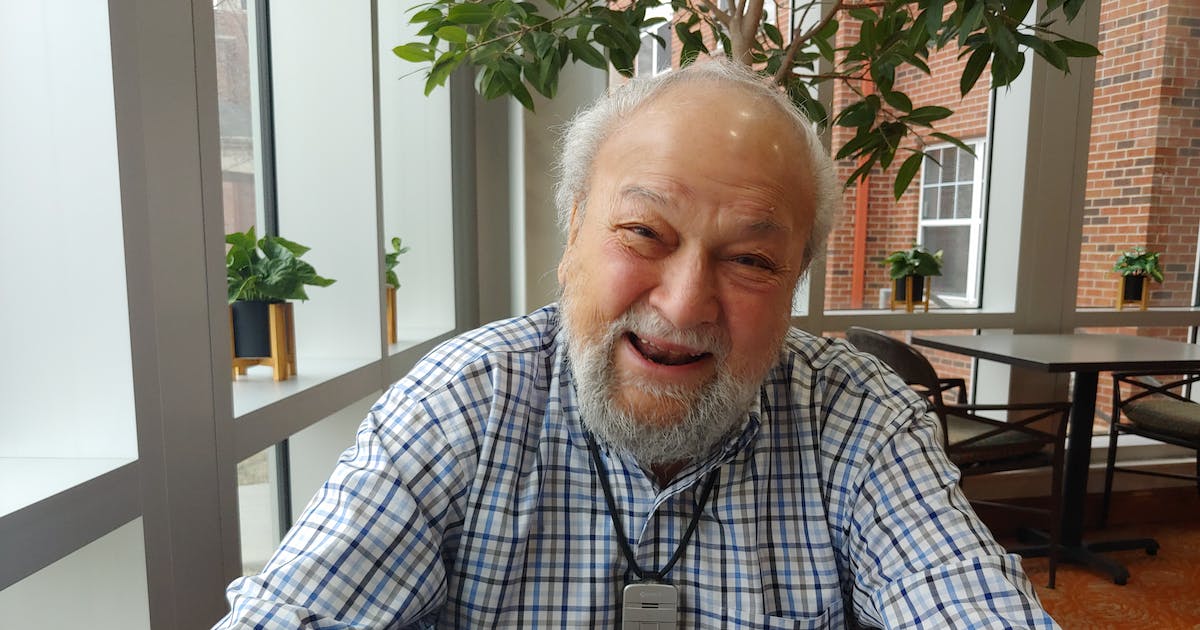 On a recent sunny Spring day, the longest-serving mayor of St. Paul pushed his walker into the bistro at his Midway-area housing complex, a familiar smile brightening his face.

Mayor from 1976 to 1990, the onetime labor lawyer might be this town’s most well-liked former politician. He recently sat down with Eye On St. Paul to chat. Topics included St. Paul labor history and what he called the “commonality of humanity” he’s found in St. Paul.

It’s easy to let Latimer go on and on, but this interview was indeed edited for length.

Q: You sometimes talk about St. Paul and Minneapolis having different labor cultures. What do you mean?

A: There’s a terrific book, Claiming the City[: Politics, Faith, and the Power of Place in St. Paul] by Mary [Lethert Wingerd]. She talks about how labor in St. Paul developed as many favorable contracts as Minneapolis, but did it in a more accommodating way. I think it has to do with its riverfront origins of smaller businesses rather than the big mills [in Minneapolis].

At the beginning, there was an intimacy between the employer and the employees that didn’t exist in Minneapolis. There’s a photograph of H.B. Fuller seated on a huge log and on both sides of him are his employees.

Q: Have those cultures changed?

A: I don’t know. I’ve been out of it for a long time. But I have a general sense that there is a continuance. Of course, after 1934, the first teachers strike in America was in St. Paul in 1946.

Q: Do you see differences elsewhere?

A: When I became mayor, there was a strike by civil servants. So, I met with them. And it was very obvious that their anger was over being treated with disrespect. It was that, much more that than it was dollars and cents.

Q: You seemed to embrace that sense of not being adversarial when you were mayor.

A: You really are pre-writing my obituary [laughs].

The truth is, there are a lot of wonderful things about aging. It’s not all bad. The fact is, as you grow older, there are insights that you get as you look back.

Now, I was definitely a union lawyer and when I was, the only time I saw the Weyerhaeusers or folks like that is when I was suing them. But, as mayor, one of the wonderful things I learned was the humanity you saw among the corporate leaders.

I was mayor for like a month, and Ted Weyerhaeuser and I didn’t know each other from Adam. He was a real reserved Minnesota rich guy. But he came to me and it was early, like July, after I took office in June. He asked if I would make sure that the Union Gospel Mission got built, because there was a lot of neighborhood [opposition]. And so he had his heart with the Union Gospel Mission, or the Boys’ Club. And it was the only time he ever talked to me about anything I was doing.

It reminded me of what I always knew: class, and money, and color — sure it shapes the way we act. But underneath it all is the commonality of humanity.

Q: What do you wish you’d done as mayor that you didn’t?

A: I was recently visited by [St. Paul City Councilmember] Rebecca Noecker. She started SPARK, St. Paul All Ready for Kindergarten. My [late] wife Nancy was dedicated to early childhood education. She asked if she could count on my support. I said I would do anything, as long as it didn’t involve going anywhere in the afternoon. [laughs].

Admittedly, the city doesn’t deliver education or human services and it wasn’t on my plate. But if you ask me what I think I could have done that would have made a better St. Paul that I didn’t do, it would be [early childhood education].”

Q: You’ve been described as the first strong mayor of St. Paul. Were you?

A: No. I was the first good strong mayor [laughs]. [Former City Councilmember] Ruby Hunt was at the League of Women Voters when she brought the strong mayor form of government forward in ’69. It was defeated. But she bounced right back and it passed in ’71.

Q: What does the term mean?

The mayor has a veto, which I used sparingly. I think I had three vetoes in 42 years [laughs], I mean 16 years.

A: I think the part of being mayor that I loved would still be possible. But the barriers to the connection [with people] are greater. And I’d have to be smarter about dealing with those barriers. I’m talking about the fractiousness of our society.

But I think the essential job is the same. And, deep down, there is still our common humanity.