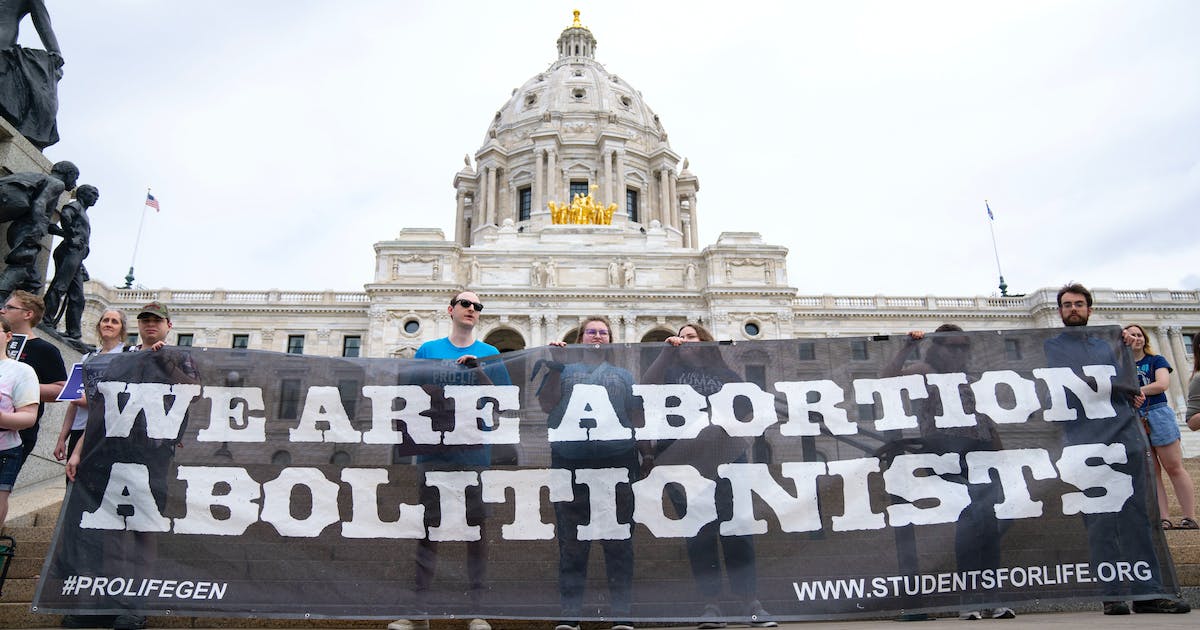 Gov. Tim Walz moved Saturday to strengthen Minnesota’s position as a destination for women from other states to get legal abortions, as states began to grapple with fallout from the U.S. Supreme Court’s decision to scrap Roe v. Wade.

“As long as we occupy this office, access to abortion services and reproductive care will be safe, legal, accessible and as affordable as we can make it,” Walz said at a State Capitol news conference, joined by Minnesota’s two U.S. senators, other DFL politicians and prominent supporters of legal abortion.

Outside the Capitol hours earlier, two dozen or so mostly young opponents of legal abortion demonstrated, part of a coordinated effort by the national Students for Life of America. An expansive banner behind them read, “We Are Abortion Abolitionists.”

“The pro-life movement is definitely going to be invigorated,” said Jenna Schabert, a 22-year-old student at Winona State University.

But at his news conference, Walz, a Democrat up for re-election in November, said that as long as he is in office he will help maintain “a firewall against legislation that would reverse reproductive freedom.”

Under his executive order, Minnesota will “to the maximum extent permitted … decline to honor requests to extradite individuals who are accused of committing acts related to reproductive health care that are not criminal offenses in Minnesota,” said an explanation from the governor’s office.

Walz’s Republican opponent, former state Sen. Scott Jensen, said Friday that he would seek to outlaw abortion in Minnesota if he is elected.

U.S. Sen. Amy Klobuchar said the high court’s ruling will create a “patchwork of laws” that will mean drastically different things for women in different states.

“That is not how this was supposed to go,” she said.

U.S. Sen. Tina Smith, D-Minnesota, a former executive at Planned Parenthood in Minnesota, noted that she’s the only senator who has worked for the longtime defender of legal abortion. She said she was thinking Friday of women who were sent home because of uncertainty following Friday’s ruling.

“They were told that it wasn’t their decision anymore because some person who never would know them or their stories had decided that they in fact got to control what happened in that person’s life,” Smith said. “It is outrageous.”

Sarah Stoesz, CEO of Planned Parenthood North Central States, said the organization has been preparing for months for a potential uptick in abortion requests in haven states such as Minnesota. Yet Stoesz said it’s possible abortion providers won’t be able to keep up with demand with as many as 26 states restricting or banning abortions.

“People will be hurt,” she said. “They will die. Children will lose their mothers. Maternal mortality rates will skyrocket in places where abortion isn’t available.”

Outside at the anti-abortion demonstration, Schabert and the others hoisted signs that read, “I am the pro-life generation” and “The future is anti-abortion.” Schabert said she’s confident that people will realize that “a world without abortion is not hell on Earth.”