Gov. Walz touts his budget plan around Minnesota while Legislature on break 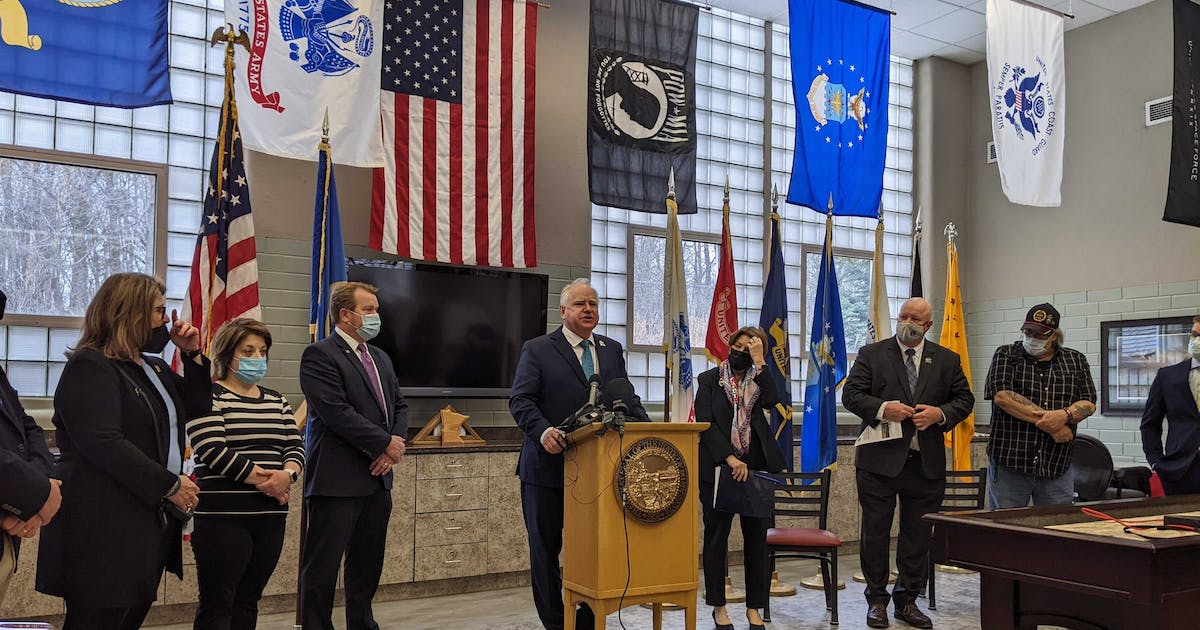 HASTINGS, Minn. — Perched on a hilltop overlooking the Vermillion River, a former state hospital and asylum is now a home for veterans, many sharing communal toilets and showers.

Mold has been an issue in some of the living quarters, and rooms are cramped and outdated on the campus, which dates back to the early 1900s.

“What they’re really asking for is to have their own private bathroom,” said Gov. Tim Walz on Thursday after a tour of the veterans home, which he wants to spend $59 million to rebuild in a state infrastructure package. “Serving the country, putting yourselves out there in Vietnam all the way up to today, that’s a pretty small ask.”

The trip was the latest stop in a weeklong tour of the state that’s brought the DFL governor from Moorhead to Twin Cities suburbs to Rochester to generate public support for major pieces of his budget plan, including direct tax rebate “Walz checks,” $300 million for communities to invest in public safety and his record-setting $2.7 billion bonding proposal.

At the Capitol, some of his biggest ideas are struggling to gain traction in the divided Minnesota Legislature. Neither side included rebate checks similar to Walz’s plan in broader tax bills, and there’s a wide gulf between Democrats and Republicans on how to reduce a surge in violent crime in the state.

The parties have agreed to very little so far this session, with a May 23 adjournment deadline and a nearly $9.3 billion projected budget surplus on the bottom line.

“I don’t think it’s time to panic yet,” Walz said, noting he’s frustrated over early inaction this year on sending direct checks to workers on the frontlines of the pandemic, as well as replenishing the state’s Unemployment Insurance Trust Fund. The fund was drained by record claims during the pandemic and has triggered big tax hikes on businesses.

With legislators back home for the Easter/Passover break this week, Walz is using his bully pulpit to increase pressure to pass parts of his plan. He said legislators in both parties are talking to their communities about the session. “They’re out there listening to their folks, and I think they’re hearing it.”

Projects such as the veterans home in Hastings already have bipartisan support, but major negotiations haven’t started yet on a package of construction projects in a bonding bill, which could be a boon to all 201 state legislators in the pivotal midterm election year.

The $59 million for the Hastings veterans home in Walz’s bonding proposal could leverage another $111 million from the federal government to help modernize the facility, which would be completed in phases over 42 months.

Minnesota U.S. Sen. Amy Klobuchar said there’s bipartisan support at the federal level to invest in veterans, and the Hastings homes is the next phase of work that’s also improved facilities in St. Cloud, Bemidji and Montevideo.

“We can’t get those funds unless we get the commitment from the state,” said Klobuchar, who was on the tour.

If funding is approved, a modern six-level building would provide the services now spread out between multiple buildings on campus. Capacity at the facility would expand from 115 people to 144, including some women and homeless veterans.

“Our veterans deserve better than what we’re giving them today,” said Rep. Tony Jurgens, R-Cottage Grove, who is sponsoring funding for the home in the House. “This is our opportunity.”

The focus of the Hastings facility is providing services for veterans with mental, chemical and medical support needs. Some live in the facility for a few months to get back on their feet, while others stay longer. Walz said the project should be a no-brainer to fund this year, even with a divided Legislature.

“The community wants us to be good stewards of their tax dollars, but there are some things they’re pretty clear on,” he said. “If you go out and ask folks in the community across Minnesota, should we spend money taking care of our veterans, it’s about the only thing that polls at 100%.”