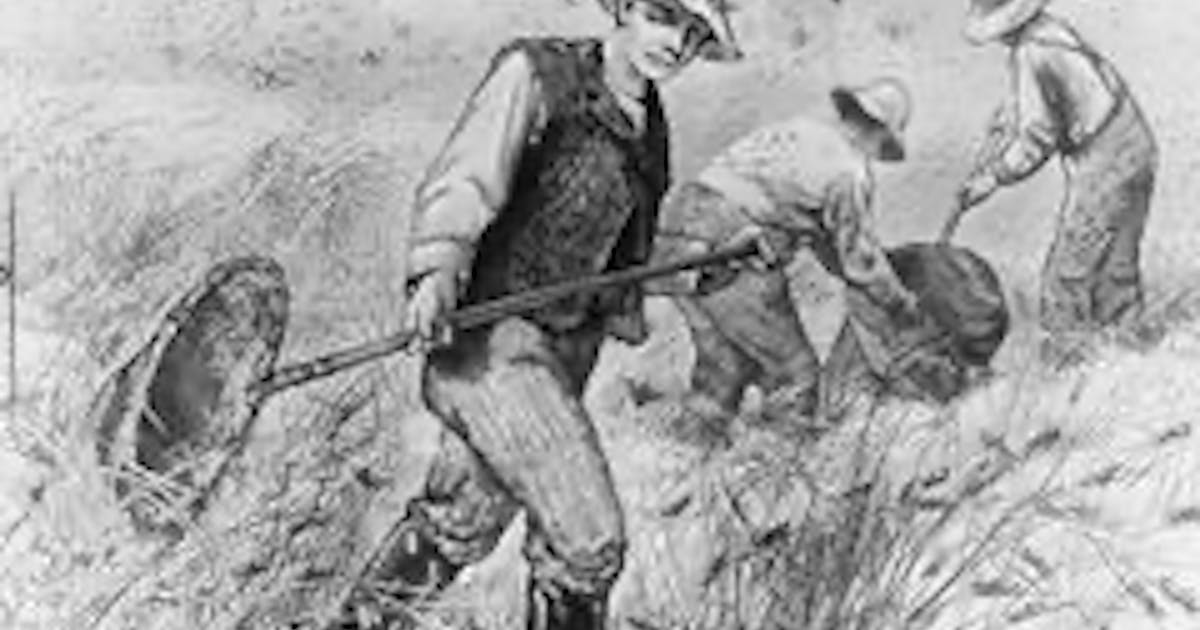 Hardship was nothing new to Eddie Gillam, who was just turning 5 when his family moved from Wisconsin to Cottonwood Lake near Windom in southern Minnesota.

“Once our oxcart was swept away while we were crossing a stream,” he recalled decades later. “And another time my father strapped me around his neck and shoulders and swam a stream.”

Four years later, 9-year-old Eddie headed to school in Windom with his younger brother, Bertie, on June 12, 1873 — “a bright, sunshiny day,” he said.

“At noon people were all looking up at the sun as it was being clouded.” They didn’t know what was blotting out the daylight.

“The great clouds of grasshoppers began to come down,” Gillam said.

“They came in a swarm that darkened the sky and settled on the houses and ground so thick it looked like a plastering of cement.”

Minnesota’s grasshopper plague would devastate the state for the next four years, gobbling up a half-million acres of wheat, corn, oats and barley. The number of counties affected tripled from 13 in 1873 to 40 in 1876. All told, more than 5.8 million bushels of wheat were lost, which would fetch $68 million in today’s dollars.

“We had to hold our hands over our faces to keep the grasshoppers from hitting us in the eyes,” he said.

Women yanked drying laundry from clotheslines before the grasshoppers snarfed it down.

“They were very hungry,” Gillam said, “and you could hear a peculiar sound as they were eating.”

Technically, the grasshoppers were Rocky Mountain locusts, and this wasn’t their first foray into the area. Pre-statehood swarms were reported in 1819, 1856 and 1857.

“Since the settlers affected then were comparatively few in number, the early plagues did not attract wide attention,” according to a 1958 article in Minnesota History magazine, detailing legislative attempts to curb the hoppers (https://tinyurl.com/1958Hopper).

In the 1870s, state leaders tried everything from paying bounties to dragging molasses-covered sheet metal through fields to drafting able-bodied men to stem the scourge. None of it did much good.

The 1877 Legislature earmarked $100,000 to foot the bounty bill — offering 50 cents for a gallon of grasshopper eggs or a dollar a bushel for hoppers caught before May 25. Prices dropped as summer rolled on.

Townships across the state named grasshopper “measurers” to track the bounties. Meanwhile, so-called hopper-dozers were employed, dragging tar- and molasses-coated metal across fields in hopes of destroying grasshopper eggs. Ditches were dug and filled with burning coal in failed attempts to smoke out the pests.

In 1877, legislation called for a draft of all Minnesota men aged 21-60 in affected areas, requiring them to volunteer as grasshopper catchers for one day a week in June. Grasshopper draft dodgers could face misdemeanor charges.

But that same summer 145 years ago, “the grasshoppers left just as quickly as they had arrived,” according to MNopedia.com.

An April snowstorm and farmers’ anti-hopper vigilance were credited for wrecking grasshopper eggs. By August, the surviving locusts flew off. Ed Gillam, among others, believed divine intervention might have played a role in the 19th century sequel to a Biblical plague.

Gov. John Pillsbury, the third governor to grapple with the hopper crisis, called for a statewide day of prayer on April 26, 1877. Businesses were closed and churches filled as Pillsbury called on “citizens of the state … forgetting all differences of religious belief, to ask for spiritual help, and protection against this great enemy which was ravaging the country and causing so much suffering,” Gillam recalled. “God heard the fervent appeal.”

Swarms of grasshoppers returned a decade later to Otter Tail County and during the Great Depression of the 1930s, but the 1870s plague defined Eddie Gillam’s childhood. Hoppers highlighted his public lectures well into his 80s, when he was said to be Cottonwood County’s oldest resident.

In one 1949 address, Gillam called Pillsbury a “grand, good governor” — remembering the time the New Hampshire-born flour-milling pioneer came to Windom on a cold January day in 1876 just after taking office.

For a first-hand glimpse of the suffering, Pillsbury walked out alone into the country to visit with farmers. Gillam said the governor met a man driving an ox team and sled without an overcoat. He told the governor he couldn’t afford a jacket. Pillsbury gave him his own overcoat, walked to town without one and soon sent provisions for the county’s needy.

Gillam went on to marry Mary Adkins in 1891. They had a daughter named Edna, and Ed sold furniture, sang in his church choir, played guitar and mandolin and ran his own music store. He died at 91 in 1956 and is buried in Windom’s Lakeview Cemetery in Cottonwood County.

Grasshoppers might be small insects, Walter Trenerry wrote in that 1958 Minnesota History article, but “his running fight with Minnesota farmers and legislators occupied a significant amount of time and used vast sums of the state’s revenues,” and he looms large in “his ability to create worry and cause destitution.”