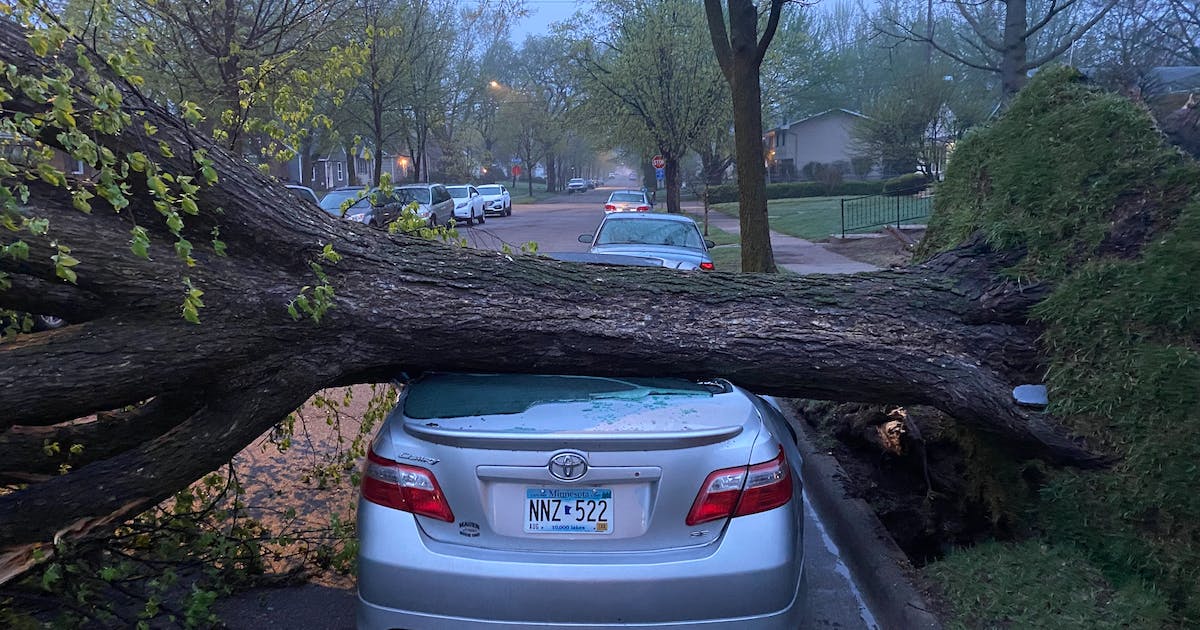 Tornado sirens went off across the metro area, including in Minneapolis, on Wednesday evening. Widespread power outages were reported, with about 80,800 Xcel Energy customers without service. Heavy rain flooded streets and parts of highways across the Twin Cities, stalling cars and hydroplaning vehicles.

A National Weather Service warning told residents in affected areas to beware of “destructive” winds of up to 80 mph and to seek shelter.

In Minneapolis, a flash flood warning was issued, and cars were stalled and partly submerged in Minneapolis at 50th Street and Nicollet Avenue, 28th Street and Lyndale Avenue and 42nd Street and 38th Avenue. Flooding at the Mall of America also caused the light rail to temporarily stop service, and Metro Transit temporarily halted Green Line service due to high winds.

Some traffic lights and streetlights were also out across the metro area. The soccer field at Allianz Field in St. Paul also flooded, postponing Wednesday’s game between Minnesota United and Colorado. The Bloomington Fire Department tweeted that firefighters responded to numerous incidents, including removing trees from roadways.

Near-record highs of 90 degrees and humid conditions will likely fuel more storms Thursday when most of the state will be under an enhanced risk for severe weather — including another possibility of tornadoes, hail and high winds.

Earlier Wednesday, storms dumped more than 3 inches of rain near Waseca, Minn., and hail 1 inch in diameter or greater was reported in Plainview, Kasson, Pine Island, St. Michael and Cottonwood. The largest stones — 2½ inches in diameter or the size of a tennis ball — fell in Oronoco, just north of Rochester, the Weather Service said.

Wednesday’s wild weather came two days after powerful storms ripped down power lines, toppled scores of trees and damaged buildings in Chisago County and in Polk County in western Wisconsin. Residents in Lindstrom, Minn., were still cleaning up damage from Monday’s storms. There was damage throughout Chisago County, the sheriff’s office said.

Behind the storms, temperatures will fall back into the upper 70s Friday and low 70s Saturday and Sunday.