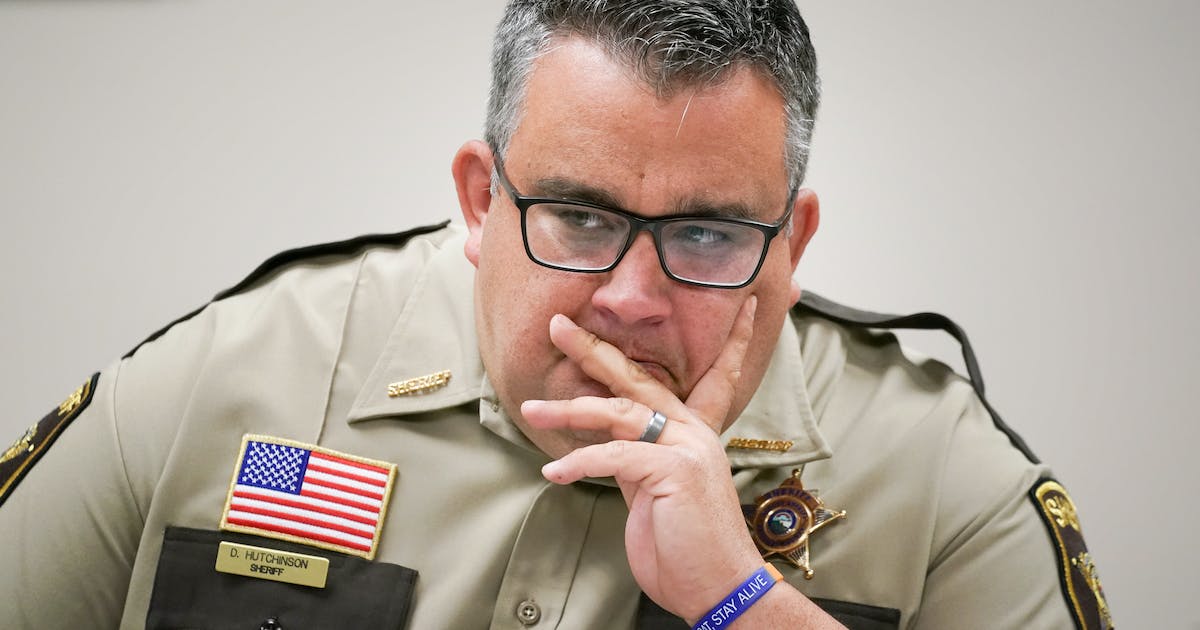 Hennepin County Sheriff David Hutchinson’s future in law enforcement currently rests with the state peace officers’ licensing board, which is conducting an investigation to determine whether he should be suspended after his drunken driving crash four months ago.

Hutchinson pleaded guilty to fourth-degree misdemeanor drunk driving after crashing his county-owned SUV after driving at speeds topping of 126 mph on Interstate 94 near Alexandria after a sheriff’s conference Dec. 8. He was sentenced to two years probation. Shortly afterward the Minnesota Board of Peace Officer Standards and Training (POST) started a required investigation to determine whether suspension is warranted. A first-time drunk driving offense can be settled in a couple of months or stretched out much longer depending on the availability of attorneys and board members or if the officer decides to appeal the discipline decision.

In the past five years, the POST board has suspended or revoked the licenses of 58 officers. A felony and some gross misdemeanor convictions result in an automatic revocation. The crimes that were committed by officers and deputies who had their license revoked include murder, distribution of child pornography, misconduct of a public official, insurance fraud and identity theft.

Hutchinson, serving his first term as sheriff, said last month he wouldn’t be running for re-election. Besides the POST board investigation, the Minnesota Sheriffs’ Association looked into his conduct for an unspecified incident toward an employee at the sheriff’s conference. The non-profit organization, which provides education and training, has no authority to discipline him.

If a peace officer’s license is suspended, they are unable to work as a sworn officer and lose the power to make arrests. If an officer were employed at an agency and assigned to a position that does not require them to fulfill the tasks associated with a sworn officer, they may be able continue to work for the agency.

Mark Schneider, Hutchinson’s attorney, said he was unable to comment. Erik Misselt, executive director of the POST board, said he couldn’t publicly share any information or confirm if they were investigating the sheriff.

“If there is a conviction of an offense that falls within the board’s jurisdiction, we will be addressing it,” he said.

Since Hutchinson’s crash, local and state politicians and community activists have been demanding that he resign before the end of his term in January. Hutchinson has repeatedly said he won’t step down. If his license is suspended, it’s unclear if he would lose any of his $188,775 annual salary.

Hutchinson was driving more than 126 miles per hour, unbelted and carrying a loaded gun when he crashed his SUV about 2:30 a.m., resulting in his hospitalization for broken ribs and vertebrae and a concussion. His blood alcohol was more than 0.13% roughly three hours after the crash. The state legal limit is 0.08%, but drops to 0.04% for anyone driving and possessing a firearm.

He admitted to drinking at the conference, which he attended on its final day. He was charged with four misdemeanor drunk driving offenses, but two were dropped and another continued for later dismissal. Hutchinson said he entered treatment of substance abuse issues.

Hutchinson has kept a low profile since the accident and a handful of candidates have said they will be running for sheriff. The Minnesota Sheriffs’ Association did look at some of Hutchinson’s behavior during the conference, said William Hutton, the group’s executive director. He wouldn’t discuss the specific concerns.

Hutchinson now awaits a possible disciplinary action by the POST board. The process has several components, starting with obtaining all relevant court documents. The case is then brought to the board’s complaint investigation committee for a hearing. There is no hearing for a crime resulting in an automatic revocation.

The peace officer and their attorney can appear in front of the committee, but it’s not required, said Misselt. The committee then makes a decision on any licensing sanctions. The officer can agree to a consent order that details the discipline results or a request a contested case hearing in front of an administrative law judge. The final license sanction is presented to the full POST board for approval in closed session.

Since 1981, the board has only revoked the license of one officer who was convicted in 2001 of a gross misdemeanor drunk driving offense. But several officers who were convicted of criminal vehicular homicide or operation lost their peace officer license.