Hopkins' Mainstreet named to the National Register of Historic Places 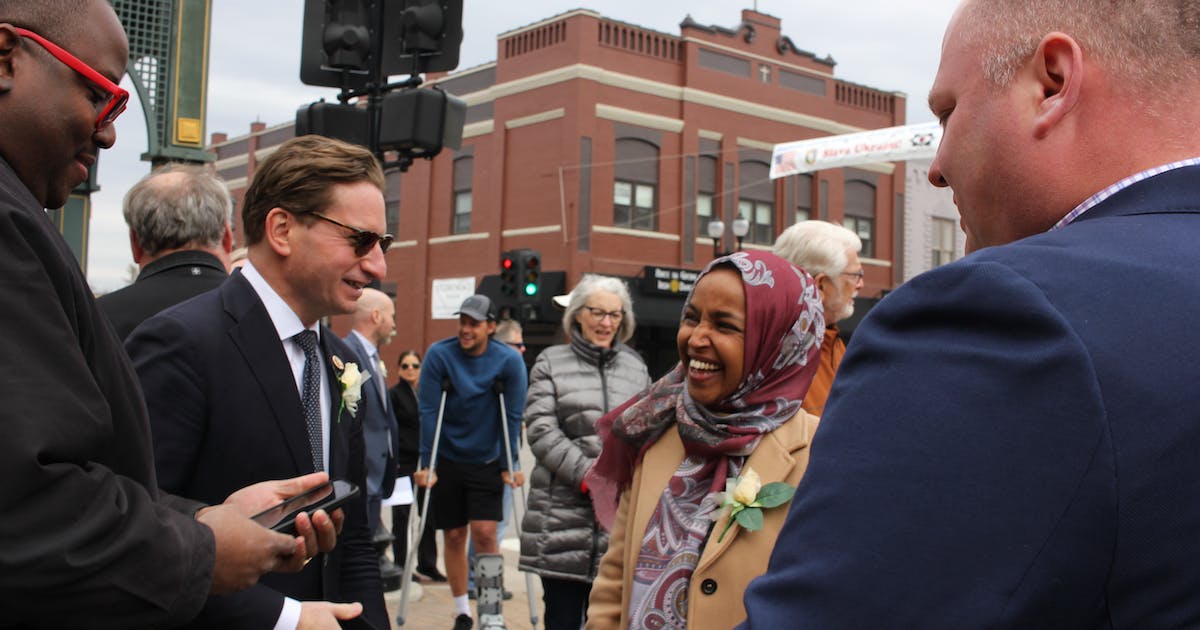 Hopkins Mayor Patrick Hanlon kept the big secret for months. But on Tuesday he announced with pomp and circumstance that when he says “Historic Hopkins,” he really means it.

The city’s Mainstreet, from 8th to 11th avenues, is now officially listed on the National Register of Historic Places — a designation made in January but kept under wraps until an outdoor celebration could be held downtown with live music and dozens of proud residents alongside U.S. Reps. Dean Phillips and Ilhan Omar.

“This designation is more than honoring buildings. It’s honoring the people and their stories,” Hanlon said. “Those historic stories are taking place every day here in Hopkins and these buildings are the markers of our memories, of our time together and the people of Hopkins.”

The Hopkins Historical Society and Minnesota Department of Transportation proposed Mainstreet for the National Register in November, applying to the U.S. Department of Interior. They were notified Jan. 19 that the commercial district, which includes 32 buildings, has been recognized by the federal government for its significance in American history, architecture, archaeology, engineering and culture.

“This was not just any small town Main Street,” said Hopkins Historical Society President Mary Romport. “This was an Amazon of building business districts. This street sold everything.”

Hopkins, incorporated in 1893 as the village of West Minneapolis, was a freight rail hub with streetcars that went downtown 50 times a day, Romport said. The city’s first doctor, Catherine Burnes, was the first woman to receive a medical degree from the University of Minnesota, and Hopkins native Archie Miller, Minnesota’s lieutenant governor during World War II, practiced law on Mainstreet for many years.

And Hopkins was the nation’s raspberry capital in its peak years, she said, shipping out berries by the boxcar loads.

The commercial district was a regional agricultural, industrial, and commercial center that was closely tied to the Minneapolis Threshing Machine Co., which later become Minneapolis Moline.

Omar said her favorite parts of Hopkins’ history include the Raspberry Festival, started in 1934, and the first ever Hennepin County Fair held in Central Park. Omar, who has represented Hopkins since 2019, said she was grateful to be at Tuesday’s announcement because the city will be redistricted next year.

“I know that this historic designation means so many people will discover the beauty of Hopkins,” she said.

Phillips said he actually used to hate old buildings, and credits his mother for tours through Minneapolis and Hopkins to learn to appreciate them.

“My mom also used to tell me that if you want new ideas, they require old buildings,” he said. “And this is the most beautiful synthesis of the majesty of the old with the possibility of the future, and no better town than Hopkins to manifest itself in.”

He called Harley Hopkins, the city’s namesake and one of its first homesteaders, an extraordinary negotiator who gave up some of his property to the railroad on condition that he got a lifetime train ticket — and a station named after him.

“If that didn’t happen, my friends, we would be talking to you today from West Minneapolis,” Phillips said.

Amy Spong, deputy state Historic Preservation officer, said there’s been an increase in historic district designations and expansion of existing districts because of state and federal historic tax credits. Legislation passed in 2019 amended the state tax code to conform with federal tax code, so property owners in historic districts now can apply for a 20% state tax credit as well as a 20% federal tax credit for rehab projects of registered properties and other benefits for income-producing buildings, she said.

“This type of investment will preserve our history and the character of Mainstreet while promoting Hopkins as a destination for future generations,” Hanlon said. “We are branching out and we are growing by leaps and bounds in Hopkins and as we branch out, this commercial corridor is the … historic roots of our city that we will maintain.”