In a twist, 'Let's Go Brandon' helps a Minnesota boy let go of his fears 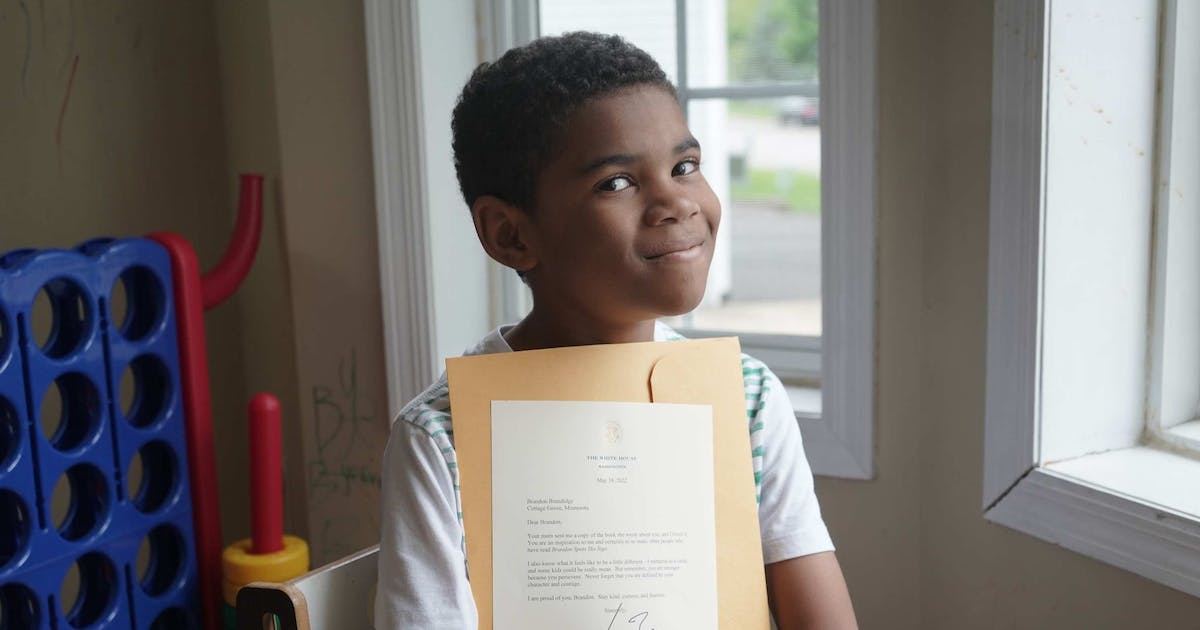 The message flapped from flagpoles, clung to bumper stickers and wobbled on signs jammed into the dust of the Texas RV park where 9-year-old Brandon and his family were visiting from Minnesota this spring.

Brandon has autism, which can make the world feel like a scary place sometimes.

The trip to Texas was full of new experiences and big decisions. Should he jump in the pool? Take the training wheels off his bike? Enjoy the sensory-friendly activities at the Houston Livestock Show and Rodeo?

The signs were telling Brandon to go for it. Brandon took the signs at their word.

“Mama, the people here love me,” his mother remembers him telling her. “They’ve got signs. They’re cheering me on.”

Encouraged by the signs, Brandon found his courage. The training wheels came off. He took the plunge into the pool, even though the water looked pretty cold and there was a very real possibility it might go up his nose. He walked around that RV park with his head held high, feeling like a celebrity.

A new children’s book, “Brandon Spots His Sign,” celebrates Brandon’s courage — and his ability to look at the world’s unkindness and see only kindness.

“He pointed and said, ‘Mama, I spotted my sign. Do you spot my sign?'” said his mother, Sheletta Brundidge, founder of Sheletta Makes Me Laugh, a multimedia podcasting and production company that amplifies Black voices. “I looked up and saw that ‘Let’s Go Brandon’ sign, and I said, ‘No. Mama spotted a book.'”

Three of the four Brundidge children have autism. Sheletta Brundidge wrote two children’s books about her two youngest — Cameron and Daniel — celebrating their adventures in a world where not many Black youngsters with autism get to be storybook heroes.

She hadn’t been sure Brandon would get his book this year. Not when the sort of people who fly “Let’s Go Brandon” flags were howling about critical race theory and drawing up lists of books to ban from school libraries.

But less than a month after Brandon spotted his sign, Brundidge and the publishers at Beaver’s Pond Press had the book written, illustrated, printed and on bookstore shelves. Just in time for National Autism Awareness Month in April.

“This is a sweet little innocent autistic 9-year-old boy who saw a flag and a bunch of signs with his name on it — and he really thought people were rooting for him,” Brundidge said. “He got brave. He got courageous. He did stuff he thought he would never do. Because he thought he saw a sign of support.”

Last week, Brandon got another nudge of support from someone with experience in “Let’s Go Brandon” messaging — President Joe Biden.

“Your mom sent me a copy of the book she wrote about you, and I loved it,” the letter on White House stationery began. “I also know what it feels like to be a little different — I stuttered as a child, and some kids could be really mean. But remember, you are stronger because you persevere. Never forget that you are defined by your character and courage.”

Right now, the Brundidge family is heading back to Texas with an RV loaded with a thousand copies of “Brandon Spots His Sign” that will be donated to the summer reading program in Uvalde. A child who knows how it feels to be encouraged by strangers is extending the same kindness to children traumatized by last month’s school shooting.

“Let’s Go Brandon,” started as a mean-spirited code — an obscenity hurled at the president by people who didn’t vote for him. Brandon Brundidge chose to define it differently.

Thank you in advance for cheering on Brandon as he starts this summer’s adventure.