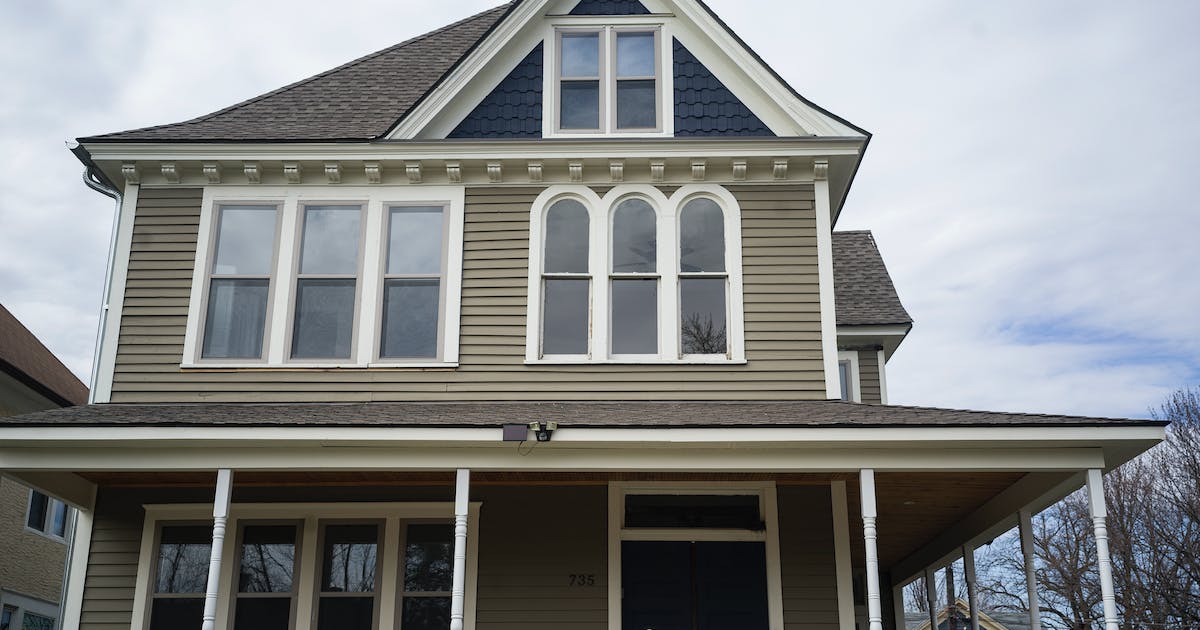 Dozens of people toured the nearly restored Queen Anne-style home this week in St. Paul, cooing over its original 19th-century woodwork and stained-glass window as well as its modern amenities, including a bright, new kitchen.

The house at 735 Margaret St. in the Dayton’s Bluff historic district is a tax-forfeited property. Instead of auctioning it to the highest bidder, Ramsey County partnered with the nonprofit Goodwill-Easter Seals Minnesota and restored the house as part of a free, 12-week job training program in construction.

More than 90 students worked on the property learning about demolition, framing, insulation, drywall, painting and trim work. The students were paid for their labor earning a combined $70,000. The home will be sold to a private buyer or to the county’s Housing and Redevelopment Authority with an eye toward affordable housing.

“We want to make these homes productive for the community and the neighborhood,” said Heather Bestler, Ramsey County’s director of property tax, records and election services.

Ramsey County is rethinking its tax-forfeited land program and coming up with innovative ways to use these properties to benefit the neighborhood and greater community, said Bestler, who took over the top job about a year ago.

As part of those efforts, they’ve renamed the department as the Productive Properties division and embarked on this rehab.

“This is pilot project. We wanted to get our feet wet and take time to learn,” she said.

The county used some of its federal COVID-19 funding to help pay for the pilot project. That money can be used to support COVID-affected workers.

“These are non-levy dollars provided through an environmental cleanup fund. If we sell the property through MLS, we do expect to recoup a fair share of that expense,” Siqveland said. “If used for affordable housing, it will be an investment in that ongoing priority of Ramsey County.”

The two-story home, built in 1890, was the ugly duckling on the block when the county took control of the property. The siding was peeling and deteriorating. A slumping second-story porch obscured the house’s original architectural charm. Inside, most rooms was gutted down to the studs.

Vans Rounds of St. Paul was one of the students who worked on the home, doing a lot of rough framing, exterior siding and then finishing work. Before, he’d worked in retail and customer service. This was a change to expand his skillset and his earning potential.

“You actually get paid while you are working and learning. That’s a big benefit,” Rounds said.

He’s now parlayed that experience into a full-time construction job that’s paying more than $20 an hour and has included raises and overtime pay.

“It’s really gratifying to be able to use your hands, put something together and even have friends and family come to you for help around their house,” Rounds, 28, said.

The four-bedroom, three-bath home now features modern appliances and fixtures. Fresh trim and paint accentuate the high ceilings, and some of the historic features that have been saved including the tile and mantle surrounding the fireplace.

An ‘investment in people’

About 70 percent of students completed the training, and 72 percent of those secured employment. These newly trained workers saw their income jump by nearly $25,000, according to statistics from Ramsey County and Goodwill-Easter Seals.

County and nonprofit leaders toured the home with neighbors and praised the project.

“We need to form partnerships with our community to make things happen,” said Ramsey County Commissioner Rafael Ortega. “It’s finding new ways that we can make our services more productive for the community, for our environment and, of course, for our taxpayers.”

Goodwill-Easter Seals Minnesota President and CEO Michael Wirth-Davis said many associate their charity with retail thrift stores but their mission is jobs and job training.

“That is just a business model that helps support the skills training … and whole menu of services we provide to help people get work, keep work and advance in careers,” said Wirth-Davis, standing in front of the restored home. “We know when people go to work, everybody does better in that family — the children, their relatives, their spouses, their significant others.”

Dahje Kemp of Minneapolis also worked on the home hanging exterior siding and installing the kitchen cabinets. Kemp, 25, said this was his first experience in the field.

He came in thinking the work could be a “little too complex,” but he said the training really demystified the profession. He’s now working in the construction field.