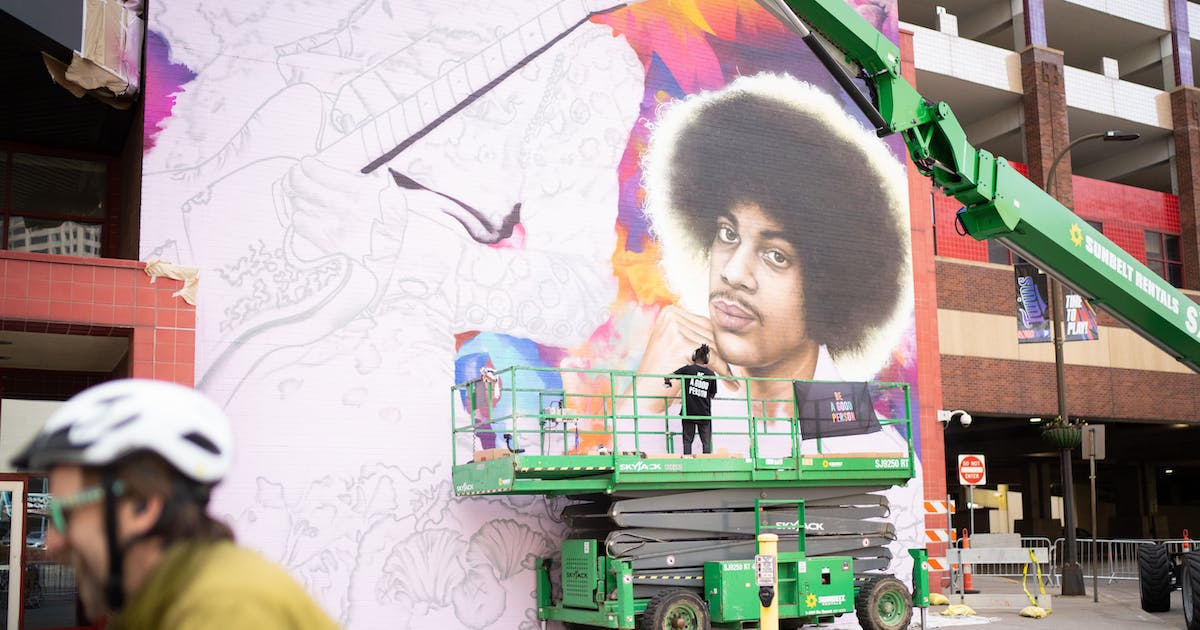 International artist Hiero (pronounced “high-row”) Veiga and his assistant Betto jumped onto a green crane Thursday to continue painting the new Prince mural on the Ramp A parking garage at N. First Avenue and N. Eighth Street in downtown Minneapolis.

As the crane rose, it hovered above the traffic lights, and a purple banner with Hiero’s name and Instagram handle dangled from the bottom of the platform, flapping in the wind on an unseasonably chilly day.

“I would never go up there,” said one of the many passersby. “I’m scared of heights.”

The 97-foot-tall mural was started on May 16. The work will continue until its completion, with an unveiling, dedication and block party set for June 2. The Purple Block Party will begin at 7 p.m. and the unveiling at 9 p.m.

The mural depicts Prince in three phases of his life, based on old photos. The completed bottom corner of the mural shows a youthful Prince, sporting an Afro and wearing a light purple jacket, with shards of color decorating the space behind his face.

Outlines of the next phase are underway, portraying Prince rocking a guitar during the height of his fame, and in the final phase, Prince is represented clutching a guitar and staring ahead.

The $500,000 project was no easy feat. It included work with the city of Minneapolis, the Minnesota Department of Transportation (owner of Ramp A), the Minneapolis Downtown Council, Prince’s estate and corporate sponsors including Target, Best Buy, the Twins, Thrivent and more.

“This has been the hardest money that I’ve ever raised in my entire life,” said Sharon Smith-Akinsanya, CEO of diversity, equity and inclusion marketing firm Rae Mackenzie Group, Inc. She worked with Prince in the mid-’90s and led fundraising efforts for the mural project.

Smith-Akinsanya also founded the People of Color Career Fair in the Twin Cities and has raised $10 million for the United Negro College Fund, among other achievements. But this mural didn’t come easy. Even the Minnesota Legislature turned down her request for money for the project.

She also worked closely with arts consultant Joan Vorderbruggen, formerly with Hennepin Theatre Trust, who handled the challenges around placing public art in downtown Minneapolis. The two started the project in 2015, just a year before Prince died unexpectedly.

The Crown Our Prince Selection Committee, which included President Nelson, Prince’s nephew, and Tyka Nelson, Prince’s sister, chose Florida-based muralist Hiero from a group of 60 artists. He is internationally known for his hyperrealistic work, and the organizers felt he could best portray something that Prince wanted.

Hiero’s work can be seen on the exterior of Miami’s Museum of Graffiti, at the Bishop Museum in Honolulu, and in Jamaica and Canada.

“Hiero’s been very devoted,” Vorderbruggen said. “He’s done a ton of research and feels a very deep sense of accountability and responsibility to do the best job possible.”

“One of the things that we knew that [Prince] didn’t want was a statue,” Smith-Akinsanya said. “It’s very difficult to do the face when you’re doing a statue, and if we know anything about Prince, [he] was very particular about the way he showed up.”

The rain and cold slowed Hiero down, but despite how difficult chilly weather makes spray-painting for long periods of time, he continued. Silver guardrails formed a circle around the mural area, and Prince’s former bodyguard was on the scene, asking people to stay on the other side of the street. Hiero declined to speak with reporters.

In addition to the mural, the Minneapolis City Council on Thursday approved a name change of N. First Avenue between Seventh and Eighth streets to Prince Rogers Nelson Way.

So it seems that Minneapolis’ Prince will finally get his crown.

“I was always annoyed, as a Black person in Minnesota, that there was nothing that really shined purple for our Prince,” Smith-Akinsanya said. “That was the reason I moved here —because he made it cool. He lived here, he died here. He could have lived anywhere in the world, but he chose us.”