Limiting goose population — and their messes — paying off in Rochester 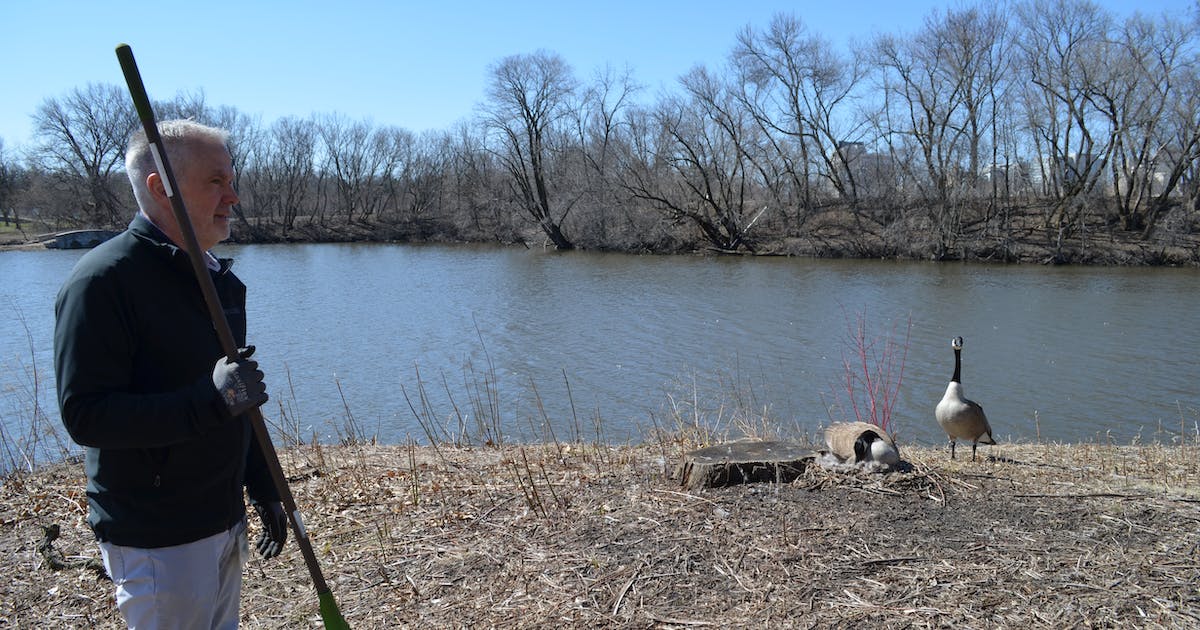 ROCHESTER — The city of Rochester’s effort to control the local goose population — and their poop — seems to be working more quickly than expected.

Rochester parks officials say there are far fewer goose eggs in the city’s parks this spring compared with 2021 after volunteers and a private company hired by the city addressed goose nests last year.

City workers and volunteers treated goose eggs with corn oil in 75 nests in 2021 in Silver Lake Park and Cascade Lake, two of the four parks targeted for geese reduction efforts. No nests were found in Soldiers Memorial Field and Foster-Arend parks.

This spring, parks officials found about 18 nests in Silver Lake Park, compared with 65 in 2021. No nests have been found at the other three parks. The Rochester City Council recently added Quarry Hill Nature Center to the city’s goose management program, but staff there found only two nests.

The efforts come after years of complaints over the amount of goose feces at Silver Lake and other nearby parks. Foster-Arend and Cascade Lake beaches have closed in the past because of water contamination from feces, and residents routinely complain about droppings covering public trails, shelters, picnic areas and playground equipment.

Rochester officials changed the way they addle eggs, or force them to become rotten, after residents protested the city’s management efforts last year. Workers and volunteers used corn oil to cover eggs, preventing them from fully hatching by cutting off their oxygen supply — a practice some residents opposed. After a public outcry, state Sen. Dave Senjem, R-Rochester, called for a moratorium on the practice.

Paul Widman, the city’s Parks and Recreation director, said this year live eggs will be replaced by ceramic ones so geese don’t lay more. He said both methods are touted as best practices by the Humane Society of the United States.

“They don’t recommend one above the other, but since there was some desire from residents to look at ceramic eggs, we went ahead and went that route this year,” Widman said.

The city plans to treat eggs within 14 days of gestation when the embryos have not yet fully developed. The eggs are then destroyed and disposed of.

Greg Munson, a former Quarry Hills Nature Center director and co-founder of the Friends of Silver Lake, was among residents who protested oiling the eggs. He expressed concerns over how the oil destroyed geese embryos and said using ceramic eggs was better because an egg doesn’t develop into an embryo unless there are geese keeping it warm.

“It’s a pretty humane way to do it,” Munson said.

Observers say the effort has already decreased the number of geese in the area, though an official study has yet to be done. Munson said residents would typically spot about 200 to 300 goslings at Silver Lake, but this year he’s seen only about 25 to 30.

Widman estimated geese are building another four or five nests at Silver Lake, but the city likely won’t treat them. Though the city wants to aggressively tackle the goose population, he said the goal isn’t to cull geese from the area but simply control their numbers.

“That process is going to take several years,” Widman said.

Rochester has had year-round geese for decades, starting when Dr. Charles Mayo bought 15 geese to live at the Mayowood estate around the turn of the 20th century. A series of infrastructure and technological upgrades to area waterways over the years created conditions for geese to become permanent residents of the city.

The geese stay near Silver Lake in particular, which has caused issues in the past. Rochester officials estimate about 40,000 geese stayed in Silver Lake during migration season in the mid-2000s. The city removed feeding bins in 2007 and installed vegetative buffers around the lake to cut down on conflicts residents might have with the birds.

Munson said residents have told him they are happy geese aren’t covering the park as much in recent years, but they still hope the birds will remain.

“We want to see people really enjoy the park, and too many geese does not lend itself well to that,” Munson said.