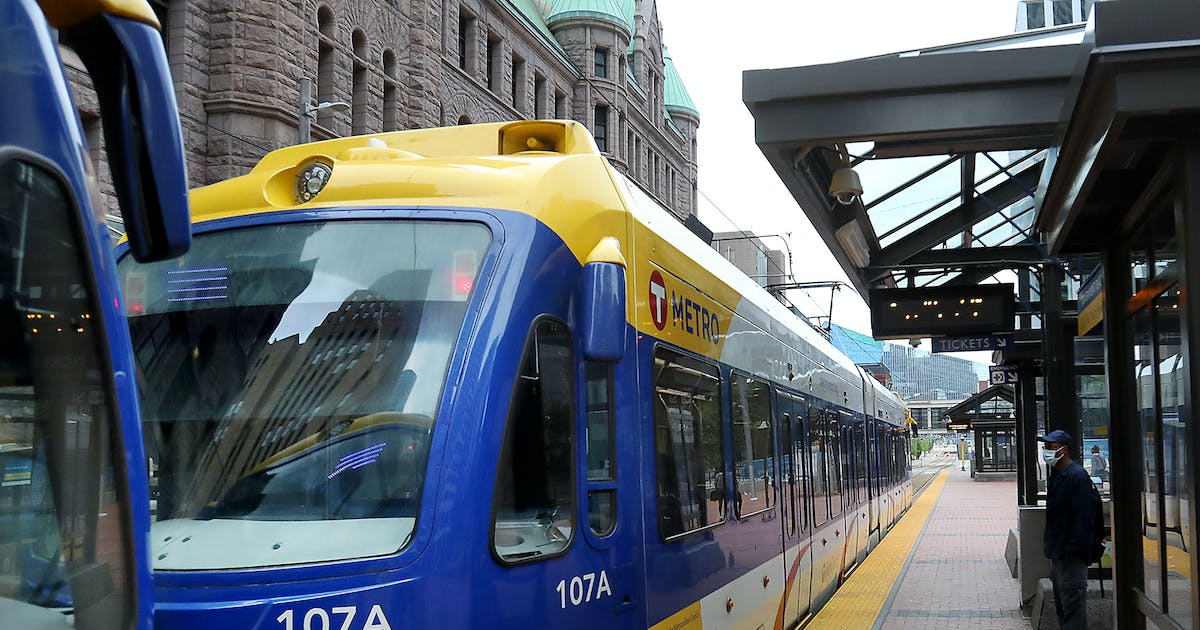 Blue Line trains running between downtown Minneapolis and Brooklyn Park would travel along Lyndale Avenue, West Broadway and Bottineau Boulevard, according to a new recommendation from the Metropolitan Council.

Mailed post cards arrived at some homes near the proposed light-rail line over the weekend ahead of the official announcement Monday, in which the Met Council revealed a map showing the preferred route and where stations would be built along the 13-mile line.

The modified route was devised over the past two years after original plans called for trains linking Target Field with Brooklyn Park to follow Hwy. 55 through Golden Valley before heading north through Robbinsdale and Crystal using eight miles of tracks owned by BNSF Railway.

But in August 2020, Met Council and Hennepin County officials realized the railroad had no interest in sharing tracks used by freight trains with light-rail trains and vowed to advance the project without using BNSF tracks.

That led to the new route, which will go through a more densely populated area of north Minneapolis by following Lyndale Avenue and West Broadway. The route was chosen after collecting feedback from the community and examining other data over the past two years, the Met Council said.

“The Metro Blue Line Extension is an essential part of our region’s transit infrastructure,” said Met Council Chair Charlie Zelle. “The route is not without its challenges, but I sincerely believe they are not insurmountable.”

Stops in Minneapolis would include Target Field, Lyndale and Plymouth avenues, Fremont and Emerson avenues, and Penn and West Broadway avenues. In Robbinsdale stops would include North Memorial Health Hospital and the city’s downtown. Other stops on Bottineau Boulevard would include Bass Lake Road in Crystal and 63rd Avenue in Brooklyn Park.

After shifting off Bottineau Boulevard and over to West Broadway in Brooklyn Park, trains would stop at Brooklyn Boulevard, 85th Avenue, 93rd Avenue and the Oak Grove station near the Target complex.

Plans on the $1.5 billion extension of the existing Blue Line have been in the works for nearly a decade. At one time, passenger service was slated to begin in 2024. That has been delayed.

“The new proposed route for the Blue Line Extension Light Rail project will bring transformational benefits to residents from Minneapolis to Brooklyn Park,” said Irene Fernando, Hennepin County District 2 Commissioner and chair of the Hennepin County Regional Railroad Authority. “The communities served by the proposed route are transit-reliant and racially diverse and have experienced historical disinvestment.”

The Met Council will host an in-person community meeting from 5 to 7 p.m. April 27 at Elim Lutheran Church, 3978 West Broadway. The council also will host two online open houses from 5:30 to 7 p.m. April 28 and noon to 1 p.m. May 3 at www.bluelineext.org.

“With this final route recommendation, community voices are essential to ensure maximum benefit can be achieved as we move towards completing the project,” said Met Council Member Reva Chamblis. “Like many people, I am excited about the prospect of an equitable transit solution for our residents. While this project will not right all the historical wrongs, it is truly a momentous investment and recognition of our vibrant, unique communities and the people that make it so.”

Planning for the Blue Line come as the Met Council is facing scrutiny over the building of the Southwest Light-Rail line from Minneapolis to Eden Prairie. The project has been beset by cost overruns and prompted legislators to vote for the Legislative Auditor’s Office to review the troubled project.