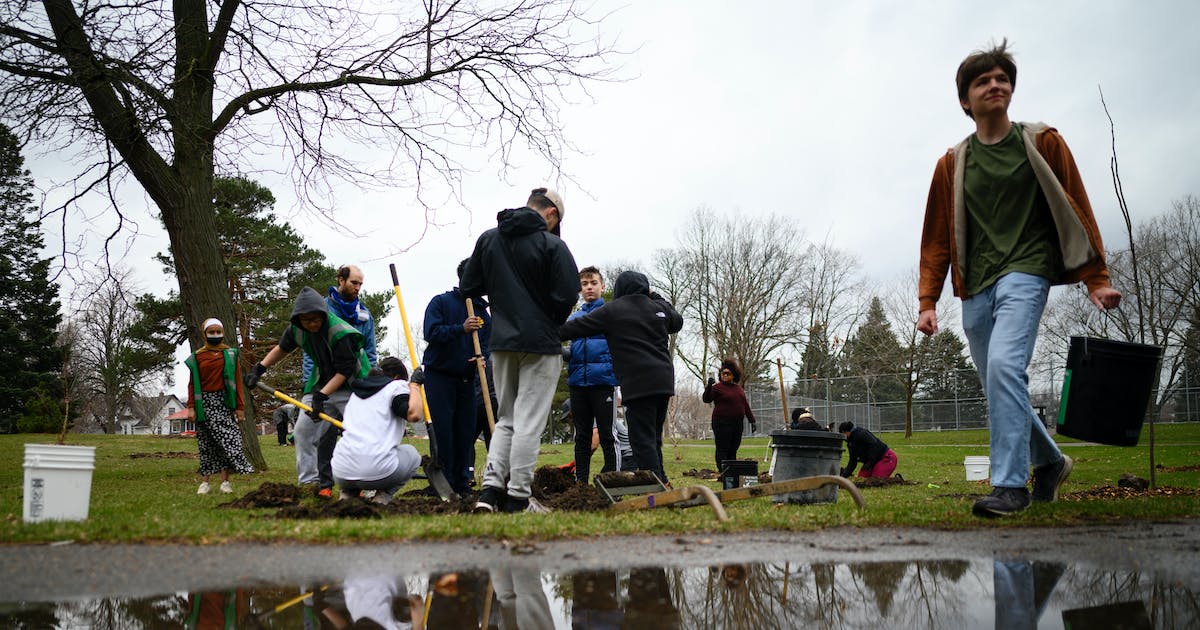 The premise: teams of up to 15 young people between 10 and 18 years old, competing to see who can plant the most trees, haul the biggest bags of litter and clean the most drains. The prize: the yet-to-be-unveiled “Golden Pail.”

As a wicked storm cleared Saturday morning, a dozen middle and high school students dug almost as many holes in the rain-polished southeast lawn of North Commons Park for bucketfuls of tree seedlings.

The Earth Day event marked the launch of “Litter League,” a summer-long program of competitive environmental challenges for youth and their families.

“On this day, on Earth Day, we want to affirm … that we are one,” said Erika Schlaeger dos Santos of The Family of Trees, during the induction of the planting. Her organization is restoring the urban forest canopy in Minneapolis. “We know that the roots of all these trees, they touch each other, they hold hands and are in community together. As above, so below.”

Urban farmer Michael Chaney of Project Sweetie Pie spontaneously broke out in rhyme: “North Minneapolis is going green. Give us a call and learn what we mean. Where once lay urban blight, now sits luscious garden sites.”

The youth recreation organization Seeds to Harvest and Minneapolis Park Board Commissioner Billy Menz loosely modeled the Minneapolis Litter League after the city of Pittsburgh’s litter picking competition for adults. They also had local inspiration from Seeds coach Mike “Talley” Tate and his Bulldogs, a team of North Side youth who for years have spent Saturday mornings shoveling snow away from fire hydrants in winter and clearing storm drains after it rains.

Twelve-year-olds Trent Witz and Jeremiah Oates, who grew up under Tate, helped a team of older teens from Youth N’ Power tip a tall seedling into a hole on Saturday.

“The fact that we’ve been in a COVID world for two years really has exacerbated the urge and the need for us to come together and do things in community,” said Youth N’ Power program coordinator Analyah Schlaeger dos Santos. “People are starting to wake up to what a lot of communities, a lot of Earth protectors, have been telling us for a long time. It’s all the more necessary, with everything happening in the world, to do things together.”