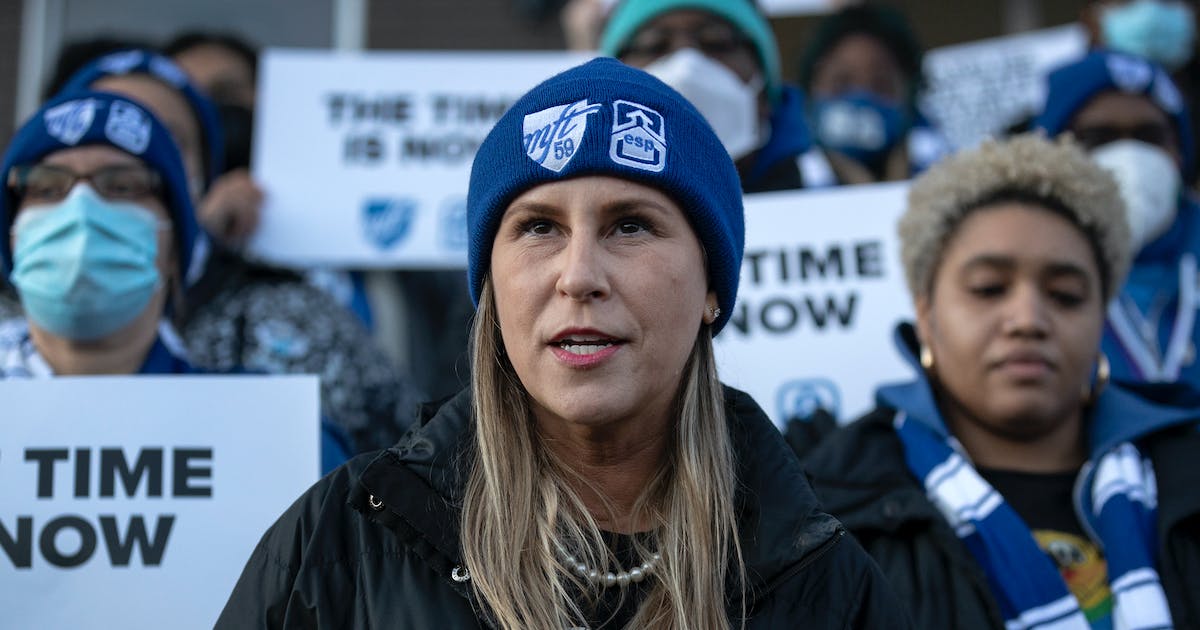 Greta Callahan trusts her intuition. It has propelled her through some of her biggest life changes: becoming a single mother at 23, pursuing teaching, leading the Minneapolis teachers union.

In each of those moments, she was resolute — her stubborn self-assurance comes out most when others doubt her clarity, she says.

That quality has won her both fervent followers and vocal opponents this spring, as she and fellow union president Shaun Laden led 4,500 members of the Minneapolis Federation of Teachers through a strike that stretched for nearly three weeks. Some 28,700 students missed 15 days of classes and the mounting conflict further exposed fault lines within the community of Minneapolis Public Schools’ teachers, administrators and families.

And the struggle, while tense and taxing, ignited that familiar fire in Callahan.

“Our fight is righteous because our north star is our students,” said Callahan, 39, who is running for a second term as president of the union’s teacher chapter.

Her opponent, once again, is Alexis Mann, a teacher at Harrison Education Center, who has said she initially supported the strike, but worries how it may affect the district’s stability for students.

Callahan has held the position since mid-May 2020. She is currently “on release” to fulfill those duties and not teaching in a classroom.

Still, while rank-and-file MFT members and leaders from the national teachers unions commend Callahan’s focus, others say it’s misguided and misplaced. They feel the strike represented the antithesis of the stability for students that the union said it was fighting for. Some feel the union should have used its collective power to push for more accountability and solutions to close the district’s achievement gap.

And they worry that messaging about Minneapolis Public Schools having enough money to meet union demands may hinder lobbying efforts for more state money for schools.

“Instead of linking arms as a district and a union and going to the legislature to say we need more money for our students, the union went on this strike,” said Bernadeia Johnson, former superintendent of Minneapolis Public Schools. She said she supports the right to strike, but said the timing and tenor of the strike was “tone deaf” and didn’t do enough to center the voices and needs of educators or students of color.

“They are hurting the greater cause here and they don’t see it,” she said.

Callahan said the strike was the local union’s next legal step in the larger fight for strong public schools. And the message to the district was about the distribution and prioritization of the money it does have, she said.

“We have marched on the governor’s mansion, we have petitioned, we have made phone calls and rallied at the State Capitol,” Callahan said, adding that pushing for change at the district-level is the power of a local union. “We are calling on the state. We’re doing both-and, not either-or.”

Members of the Minneapolis Federation of Teachers in voted in mid-February to approve a strike if union leaders felt it was necessary after months of stalled negotiations. That support was overwhelming: 90% of union members voted and of those votes, 98% of support staff and 97% of teachers authorized the strike.

“Greta is very strategic in her thinking,” Pringle said. “Of course when you’re leading in a moment like this, you are subject to criticism. But she stays so clear in her purpose.”

Callahan’s route into teaching wasn’t a direct one, at least not at first.

She attended Minneapolis Public Schools until high school, when her father enrolled her in the Academy of Holy Angels, a private Catholic school in Richfield. Callahan’s parents divorced when she was young and she’s one of eight children.

After high school graduation, Callahan felt unsure about her career path. She attended what was then Augsburg College to study psychology before moving to Washington state to learn about herbal medicine. About a year into that program, Callahan became pregnant and moved back to Minnesota where she worked at a daycare and relied on state assistance in the early years of raising her son, she said.

She returned to Augsburg and finished her degree in psychology before earning her master’s in education.

When interviewing for her first teaching position at a charter school in north Minneapolis about a decade ago, she remembers telling the principal, “Don’t let my blonde hair fool you. I can handle anything.”

She got the job but ended her first day as a kindergarten teacher in tears.

“I came in full-on Disney princess-like, but the kids just didn’t trust me,” she said. “It was really, really hard…but everything in me was like, ‘This is exactly where I’m supposed to be.'”

Tequila Laramee, the educational support professional who worked with Callahan in the classroom, said Callahan would do morning yoga with her students and had a piano in the classroom that she used to both teach music and sing songs.

While she had high expectations of her students — staying silent in the hallway on the walk to lunch, for example — she was always caring and compassionate toward her students, Laramee said.

“Greta is real — she’s going to tell you how it is,” Laramee said. “She means what she says and you can always see her passion.”

She’s taken heat for the language she used at rallies during the strike — saying the fight was one against capitalism and the patriarchy.

She hardly blinks when asked about the rhetoric or union tactics throughout the strike. Those criticisms, that “tone policing” as she calls it, can’t be a distraction.

“What I’ve learned from all this is that I have to stay focused,” Callahan said. “And what I do know: The strength we have in our membership is something new. I’m far from perfect, but we have each other. That’s what I’m proud of.”