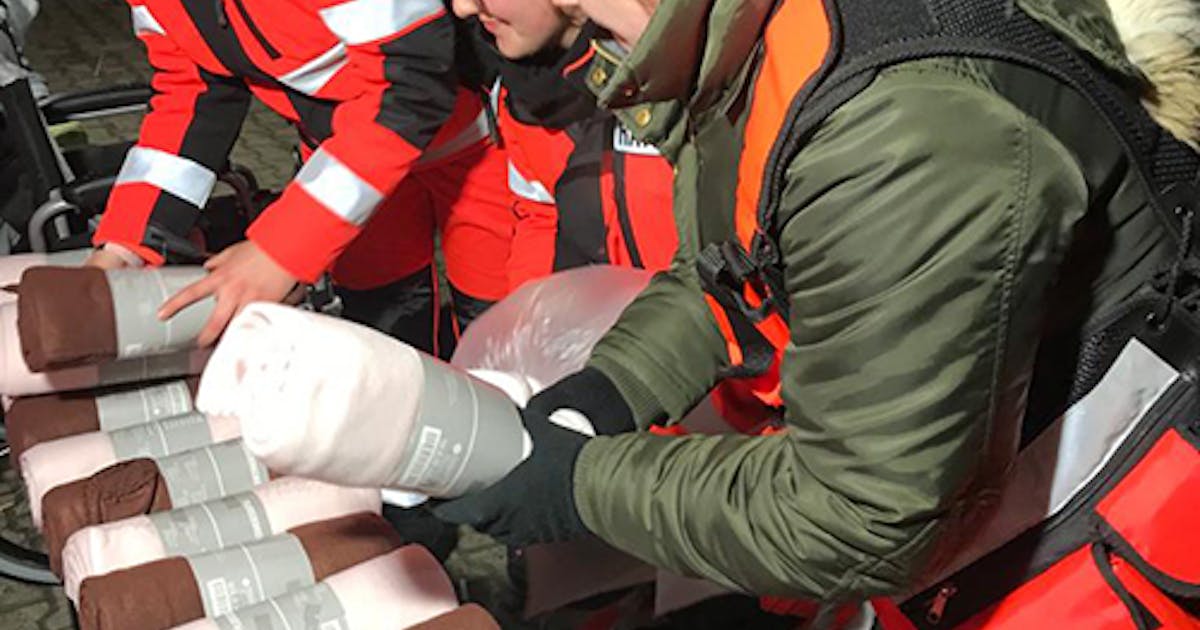 As millions of people flee Ukraine amid Russia’s continued assault on the country, a Minnesota-based group is helping organize humanitarian aid along the country’s border with Poland.

The once-sparse countryside where Ukraine and Poland meet has been transformed, as humanitarian groups set up tents and warming stations for refugees. Many crossed the border on foot, said Klaudia Khan, who is Polish and has been back working in her home country since February. Khan, who usually works out of Pakistan for Minneapolis-based Alight as a communications officer, said the humanitarian group has been instrumental in coordinating efforts along the border crossing.

“We want to give them a warm welcome,” Khan said of Alight’s work in the small Polish town of Medyka. It’s become a place where refugees briefly stop to rest, eat and warm up amid below-freezing temperatures. “It’s busy and lively. There’s lots of tents to house services and different facilities.”

Calling it the “Mile of Warmth,” Khan described it as a safe zone where medical workers can treat refugees who were injured in gunfire and bombings in the fighting in Ukraine.

For most who pass through, the town is just a stop on a long journey.

From Medyka, refugees board buses taking them farther into Poland to meet up with relatives, go to larger resettlement facilities or continue on to other countries farther west.

So far, Alight has raised $1.1 million to help those fleeing Ukraine. A spokesman estimated that about $750,000 of that came from Minnesota.

Medyka is the busiest crossing point, vital to hundreds of thousands of refugees — many of whom are exhausted, dehydrated and hungry, said Alissa Jordan, global activation lead of Alight and a Minneapolis resident.

The northeast Minneapolis organization, formerly known as the as the American Refugee Committee, has been helping refugees for more than 40 years and was started to assist those fleeing war-torn Southeast Asia. Alight, which employs 2,000 people around the world, operates on a budget of $67 million supplied by the United Nations, the U.S. and other governments and private philanthropy.

Jordan said the usual process of distributing humanitarian aid can take weeks or longer “if we’re talking about grant applications or awards. With the donations that people send directly to Alight’s Ukraine emergency fund, it releases our emergency response team to have the flexibility and the agility to speak with paramedics at the front lines of the border and get them what they may need.”

Alight’s services include training volunteers to help victims of sex trafficking among the migrants who are mainly women and children, as Ukrainian men between 18 and 60 years of age are not permitted to leave the country. Many of the refugees are elderly; the nonprofit provides wheelchairs for many who need them.

Alight also distributes blankets and gloves, helps refugees file paperwork that sometimes requires translation, and provides phone chargers that can be lifelines for families who have loved ones back in Ukraine or relatives in another country willing to take them in.

Inside Ukraine, Alight is providing much-needed shipments of medical supplies like freeze-dried plasma transfusion kits, wound dressings and pain relievers to heavily affected areas. Recently, the organization announced it is also purchasing and transporting food to the eastern Ukrainian city of Lviv, which has been under attack by Russian forces and has more than 200,000 displaced people.

Alight, which has humanitarian efforts around the globe including in Jordan, Myanmar, Somalia and Sudan, recently aided in resettling 750 Afghan refugees in Minnesota after the United States pulled out its armed forces from Afghanistan. The nonprofit recently announced it is also dedicated to resettling Ukrainians in the United States, after President Joe Biden said the country will allow up to 100,000 refugees fleeing the war.

Over the last few weeks, border crossing conditions have improved as humanitarian efforts have become more streamlined and efficient, and the weather is warmer than it was in February, when the war started, Khan said.

“At first there were a lot of humanitarian groups and they all wanted to do something. There was no coordination,” said Khan. “It got organized, and I hope Poland becomes even more welcoming to refugees.”