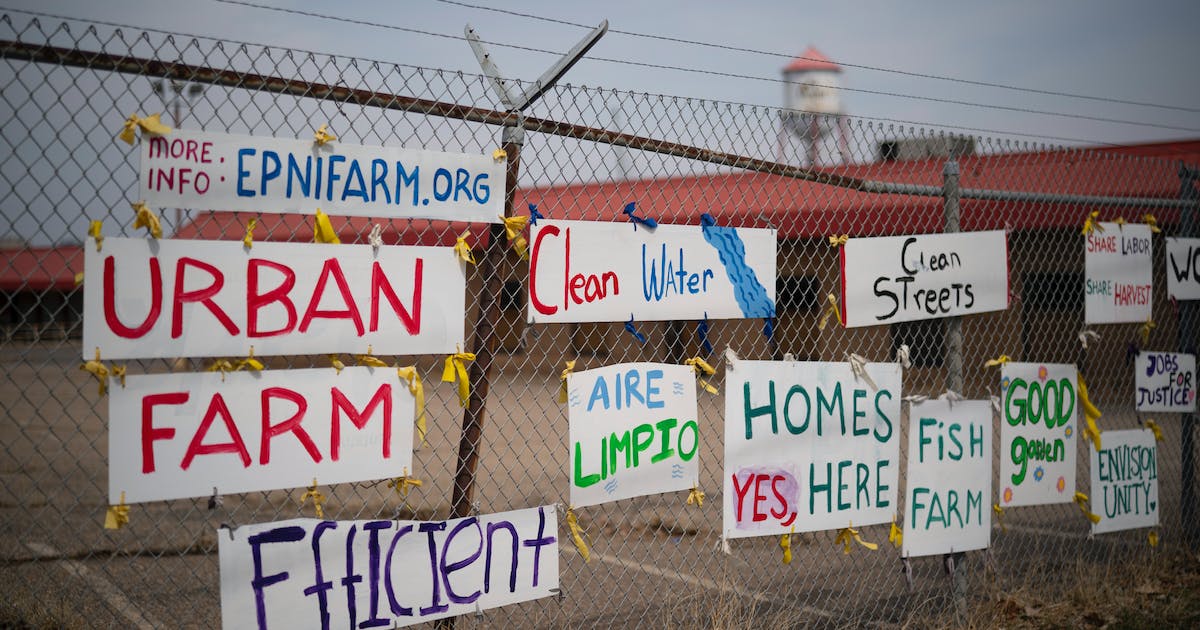 East Phillips environmental activists waging a years-long tug-of-war against the city of Minneapolis for control of the former Roof Depot warehouse have come to a crossroads and need the public’s help deciding whether to fight on or compromise.

Minneapolis Mayor Jacob Frey has an offer he hopes they won’t refuse: $1 for 99 years rent on three acres of city-owned land at Longfellow Avenue and East 27th Street for an urban farm. In return, they’ll have to coexist with the Public Works facility that the city also wants to build there.

The city plans to demolish Roof Depot to build a facility for staff who maintain its sprawling water distribution system, their equipment and vehicles. They argue operating out of a central location will reduce emissions citywide.

The East Phillips Neighborhood Institute (EPNI), is a grassroots organization pushing to save the warehouse and develop it as an urban farm with affordable housing and retail instead. They and both Ward 9 City Council members of the past eight years have opposed the city’s plan because it would concentrate diesel trucks in a heavily industrialized, low-income and minority community that already suffers from high rates of asthma hospitalizations.

During a community meeting earlier this month, he told a crowd of roughly 30 urban farm supporters that the city would help them raise money to develop the farm, take care of remediation and cover ongoing maintenance like snow plowing.

“But those three acres come with the [city’s] plans,” Dovolis said. “You get the three acres if you accept the 814 vehicles that come with it in the process. That’s sort of like the devil’s decision that’s been put out there before us.”

In a joint statement with Chavez and Koski, Frey’s office confirmed the general terms on the table. “The city is optimistic and looking forward to a successful outcome,” it read.

According to site plans created by RSP Architects in February, much of the city facility will be devoted to parking and vehicle storage, including 386 surface parking spaces for fleet and personal vehicles, a three-story parking ramp for another 428 vehicles and a fuel station.

Former state legislator Karen Clark urged meeting attendees to carefully consider the environmental tradeoff. “One of the things that is endemic in our neighborhood is asthma,” she said. “It damages our children throughout the neighborhood. The number one reason that they miss school is because of asthma.”

Over the years, the City Council has teetered between the two proposals, preventing either from proceeding as the city’s project expenditures swelled to $14 million.

In 2018, the council voted unanimously to green-light the Public Works’ water yard. But following the pandemic and murder of George Floyd, they revisited the issue. Last fall council members ultimately decided to tear down the warehouse, but bisect the 7.5 acre property so that three acres would be set aside for community use while the city built its Public Works water yard on the remainder of the site.

In March, Chavez attempted to revise that decision and give EPNI another shot at saving the Roof Depot warehouse. He convinced eight of 13 council members to suspend work on the Public Works facility, find city funds to replenish the $14 million already spent and make new redevelopment plans in partnership with “community stakeholders.” However, Frey swiftly vetoed that vote, challenging EPNI to repay the city and prove their preferred concept would be financially feasible.

Community organizer Joe Vital asked meeting attendees to consider all options. If the community turns down the mayor’s latest offer, EPNI would have to raise $14 million to $30 million in three months to meet conditions laid out in Frey’s veto letter. Failing that, the city would proceed with demolishing Roof Depot, leaving EPNI to complete for the three-acre community site in an open bidding process.

A second community meeting has been scheduled for 1 p.m., June 12 at the East Phillips Community Center. Feedback from both meetings will guide EPNI’s decision.

“I cannot stress how much we need your input at this time,” Vital told those gathered.

EPNI is suing the city, alleging the Public Works facility should be evaluated for how much it would add to East Phillips’ cumulative air pollution. The parties have been in mediation for weeks.

The group’s lawyer, Elizabeth Royal, said that as part of settlement negotiations, city attorneys have offered EPNI exclusive development rights to the three-acre community site for 24 months with no fee. In that time, EPNI would be expected to come up with development plans for the site. The parties still are working through details and haven’t arrived at a final offer.

Sale or long-term lease of city property requires a public hearing and City Council approval. If East Phillips residents decide to take the mayor’s offer, it still would need to go through those steps, Vital said.