Minneapolis students back in class after teachers strike: 'We've got a lot of learning to do' 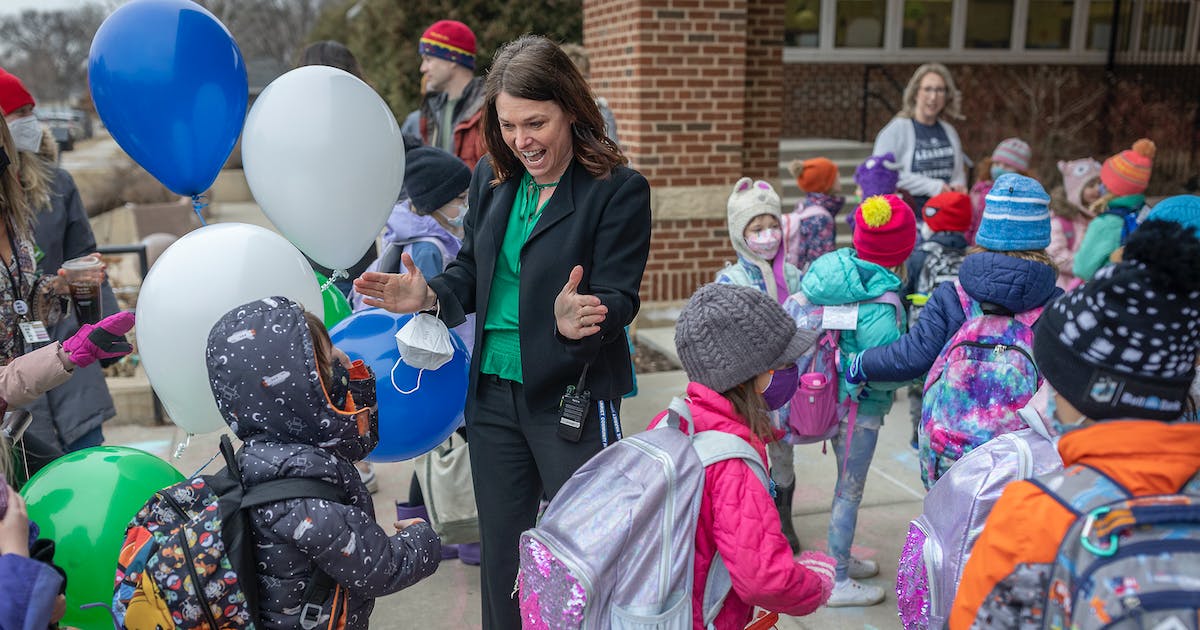 Students returning to Lake Harriet Lower Community School on Tuesday were greeted with hugs and high fives, balloons and a “red carpet” made of long rolls of scarlet paper. “Welcome back” banners hung near the door and the school’s mascot — a green and yellow dragon — danced as parents snapped photos of their children.

In many ways, teachers and parents said, the scene in southwest Minneapolis and the energy of the morning felt like the first day of school in the fall.

Tuesday marked the restart of classes after a three-week teachers strike that ended over the weekend, when Minneapolis Federation of Teachers members ratified agreements with the school district.

“The last three weeks were challenging for everyone, but this is a chance to process what our future looks like and move forward with the bonds that were created,” said Lake Harriet Lower Principal Angie Ness. “We know there were many different feelings, but now it’s about coming together as a school community.”

Some of those emotions flared Tuesday night during a school board special meeting interrupted by students, community members and teachers pushing back on extending the school day and year to make up for lost class time. The group also expressed frustration that interpreters were not available for the meeting.

Amid the shouts of protesting students, the board voted to approve the changes to the school calendar.

Those adjustments were agreed upon over the weekend as part of the return-to-work agreement with the union. They include adding 42 minutes to the end of each school day once students return from spring break, which runs April 4 to 8, and tacking on an additional two weeks to the school year in June. This Friday, originally a teacher record-keeping day on the school calendar, will also become an instructional day.

Without such extensions, the district would fall below the state requirements for instructional days and hours, which could bring financial and criminal penalties, said Amy Moore, the district’s general counsel.

Because Tuesday’s meeting was a special business meeting, it did not include a public comment period. Shortly after the meeting started, students stormed in, yelling into bullhorns. After a few minutes, Superintendent Ed Graff walked out of the board chambers.

“It doesn’t matter how we remedy the situation, it’s not going to satisfy everyone,” School board member Ira Jourdain said before the interruption.

Senior Kellen Sonquist said baseball practice and occasionally playing the video game “Valorant” kept him busy during the strike. He wasn’t bothered by the planned extension of the school day and calendar to recover the lost strike days.

“We have to make up the time somehow,” he said.

Abdullah said school staff will work with students and their families to mitigate the effects of the latest disruption to their education.

“Come on in,” he said to the arriving students, striking an upbeat tone. “We’ve got a lot of learning to do.”

Senior Abdirashid Hassan, said he has mixed feelings about the extra 42 minutes he’ll spend in class at the end of the day. He picked up extra shifts at a Speedway convenience store during the strike. His manager typically schedules him to start work at 4 p.m. and Hassan said he’ll now have to take fewer work hours.

Hassan plans to take a gap year after he graduates so he can visit Africa, a trip his part-time job will help pay for.

As for the three weeks without school? “It was hard. I didn’t like it,” he said.

Parent Taylor Stringe, a former teacher with the district, said he feels good about educators’ contract wins, including higher pay for education support professionals and protections for teachers of color. He was also feeling positive about sending his kindergartner, Adelaide, back to school at Marcy Arts Magnet.

She was, too: “I get to see all my friends,” Adelaide said.

District leaders have yet to release details on the financial impact of the contracts, and a school board finance committee meeting scheduled for Tuesday was canceled. Asked by a school board member about the cost of the school year extension, Graff said he didn’t have an immediate answer.

In announcing the agreements last week, Graff said the contracts will require the district to make adjustments to its budget.

“There is no reason any school in Minnesota should have to make cuts. Students have been shortchanged for years by politicians,” Education Minnesota President Denise Specht said Tuesday. She reiterated a long-standing push for the state to increase taxes on corporations to raise money for education. Gov. Tim Walz has proposed a 2% increase in per-pupil spending, which Specht said is not enough but a step in the right direction.

Standing outside Lake Harriet Lower, J.J. Grosser said the welcome back decorations were a “nice touch” to add to the celebratory mood.

“These are young kids and have been through a lot of transition over the last two years,” said Grosser, the father of a second-grader. “We’re excited to have a piece of normal back again.”

Inside, classes spent the first part of their morning settling back in. Kindergartners were encouraged to bring their favorite stuffed animal to class to comfort them. They caught their teachers up with life updates from the last weeks — learning to cartwheel, hurting a foot, visiting grandpa — and shared how they felt to be back in school. Most said they were happy, though a few expressed anxiety.

Taylor Clarke, a first-grade teacher and a strike captain for the school, showed her students photos from rallies and picket lines and explained how she’d spent her last three weeks.

“I was thinking about all of you the whole time,” she said.

When it was her turn to share how she was feeling, she told her class she was excited to be in front of them.

“I realize how much we’ve all been through,” Clarke said. “And I know that we can truly get through anything together.”