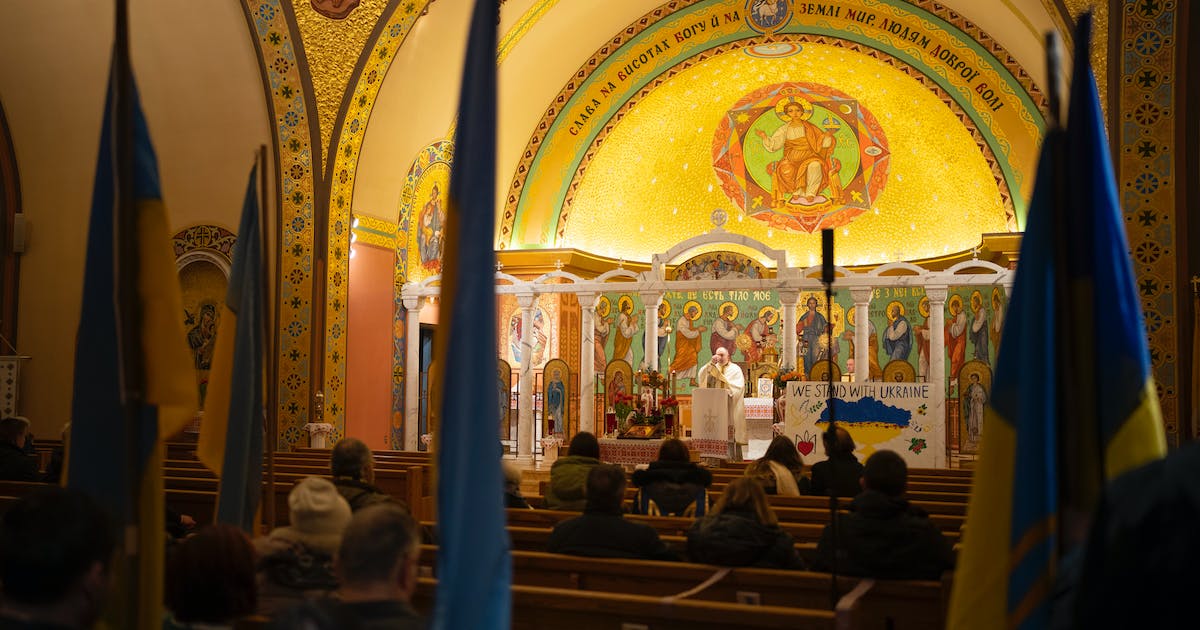 The Rev. Ivan Shkumbatyuk’s daughter taught her fourth-grade classmates to write in Ukrainian last week as they made cards for her father to bring along on a trip to Poland this week to deliver much-needed supplies.

“We are praying for you and we support you,” one message reads. Shkumbatyuk and two volunteers from St. Constantine Ukrainian Catholic Church in northeast Minneapolis are flying to Warsaw on Tuesday to meet up with one of Shkumbatyuk’s longtime friends, who is now working as a chaplain for Ukraine’s military as it defends the country from Russia’s assault.

Shkumbatyuk — who as a priest in the Ukrainian Catholic Church is allowed to marry and have children — said he’s nervous for the trip.

Born outside Lviv, Shkumbatyuk studied to become a priest in Ternopil. Later he was asked to move to the United States and was assigned to a Ukrainian church in North Dakota. He moved to Minneapolis in 2019 and started working at St. Constantine.

“When I was taught and was preparing for priesthood, they didn’t prepare me for this type of situation — how to minister in times of war,” Shkumbatyuk said through an interpreter. “It’s definitely something I’m getting used to.”

From Warsaw, the supplies will be taken to Mariupol and other cities along the eastern front to be distributed to soldiers on the front lines and to civilians.

The supplies, all fitting into 25 large duffel bags, were purchased by the church and donated by Minnesota residents and organizations. That includes piles of bandages, antibiotic ointments, power banks charged by solar energy, backpacks and straws that filter water, said Taras Pidhayny, treasurer for St. Constantine.

Buying and collecting the materials and sending them to Ukraine was the most practical way of getting the supplies there, as quantities in European stores are dwindling and shipping continues to be an obstacle in war-torn areas.

“There’s clothing for the military so they have a change of boots, socks and pants — so they’re properly outfitted,” Pidhayny said.

Dima Blyshchak, one of the volunteers taking the trip with Shkumbatyuk, said this will be his second time dropping off supplies.

“My first trip [in April] was to see my mom, who left her hometown to go to Germany,” he said. “The purpose was to see my mom and I thought I’d grab a couple of bags and drop them in Ukraine.”

His mother plans to wait out the war in Germany and return to her hometown, Ternopil, once it is safe enough.

Busy packing up the last of the supplies Monday evening, Blyshchak is already planning his next mission trip in about three weeks.

“It’s seems it’s the most efficient way and it’s probably the fastest way,” he said. “You know these supplies will go to the people and will not be sitting in a warehouse.”

The mission trip is one of many that local Ukrainian groups have been taking to aid friends, family and the Ukrainian military. Some volunteer groups go as far as western Ukraine to drop off the supplies. St. Constantine is planning on future supply runs as the war continues.

For Ukrainians in Minnesota, who see their homeland on television plagued by the war, they’re doing all they can to help. Life has completely changed for Shkumbatyuk’s friend, who will take the supplies from Poland into Ukraine.

“There’s no longer a normal routine. The chaplain doesn’t get to see his family all that much,” Shkumbatyuk said. “He’s completely immersed in trying to help these people in the military.”

To donate go to standwithukrainemn.com