Minnesota bears may be fat and happy, rather than at risk 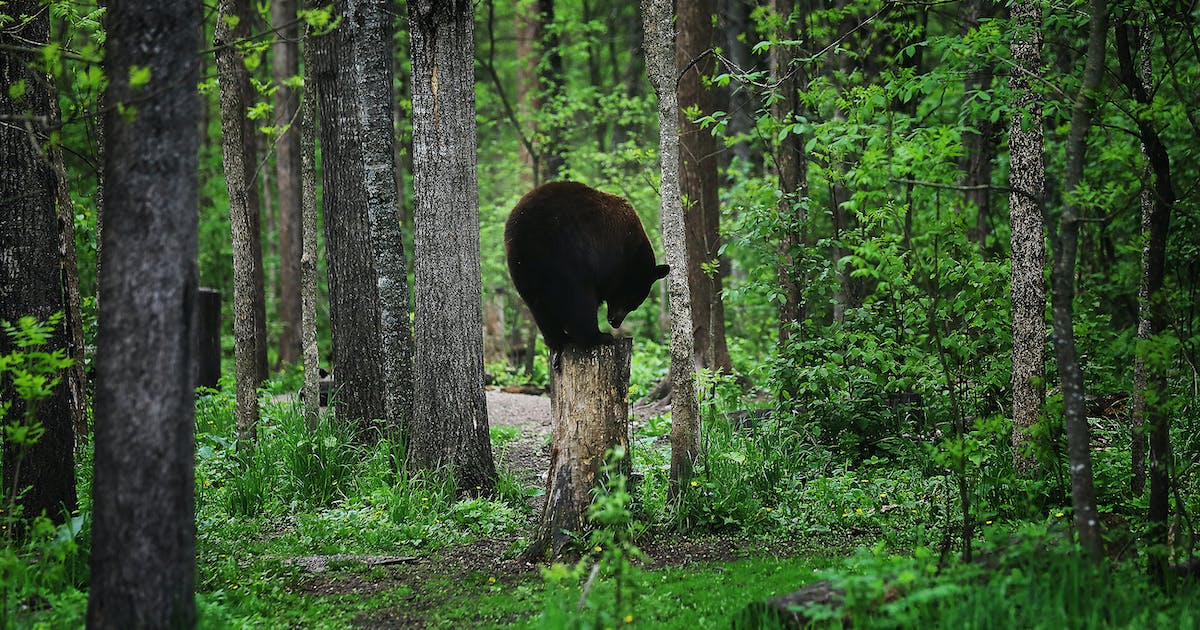 Researchers were worried that a strange new affliction was harming about half of Minnesota’s black bears. They found evidence that bears were having cubs later in life, and fewer of them.

Oddly, only the bears with the most food available to them – near the farms and young oak forests of central and northwestern Minnesota – appeared to be stunted in their reproduction. Was a pesticide or change in the food web threatening the next generation of one of the state’s most beloved and recognizable wild animals?

Now state biologists believe the opposite may be happening: That some of Minnesota’s bears have become so fat that the old ways of testing for their general health and reproductive age may no longer work.

“It could be that rather than things getting worse, they could be getting better and these bears are growing much quicker than ever before,” said Andrew Tri, bear biologist for the state Department of Natural Resources (DNR).

It depends on what, exactly, is happening to their teeth.

Over the past 40 years, researchers have learned a great deal about individual bears and populations by the rings of their teeth. Every time a hunter shoots a bear in Minnesota, they must mail one of its teeth to the DNR, offering the state a rare trove of data and history. The teeth are sliced, dyed and examined under a microscope to measure rings, like those on an oak tree.

Wider rings in the teeth are evidence of good, healthy years with ample food. Narrow ones show lean times and stress. In females, those narrow rings, in part of the tooth called cementum, can be used to find exactly how old they were when they had their first cubs, and the same for each litter they produced thereafter.

“When they’re nursing cubs all that milk is coming out of body resources, mostly out of fat,” Tri said. “So you can imagine there are less resources that are going into cementum growth and things like that.”

Generally, the fatter the bear, the healthier it is. They need to amass enormous energy stores to make it through winter and hibernation. That’s especially true for the mothers because cubs are born between mid-January and early February, the harshest and leanest time of the year.

Bears take longer than most forest mammals to reproduce. The healthiest, heaviest ones start having cubs at 4 years old. Those are the ones that grow up quickly, feasting on the vast rows of industrial cornfields in central and northwestern Minnesota, and on all the acorns, nuts, berries, fawns and fish in young productive forests, Tri said.

In the Arrowhead region near Duluth, where the woods are more mature, bear food is a little harder to come by. There they don’t get big enough to start reproducing until they are around 5 years old. Farther north, in the Boundary Waters Canoe Wilderness Area and southern Canada, food becomes comparatively scarce.

The jack pine forests on granite outcrops just don’t produce much that bears can eat, and the omnivores don’t have the energy to have cubs until they are about 5 1/2 or even 6 years old, Tri said.

Over the past decade, the teeth of dead bears showed something was changing. The bears that should be having cubs at 4 years old didn’t have those tell-tale narrow rings in their teeth until they were 5 or even older.

But all the other available evidence shows these bears should be growing faster than ever, Tri said.

For the past three years, the DNR closely watched young collared bears in areas where their teeth are changing to try to figure out what was happening. Some they’ve been following since they were yearlings just out of the den. The collared bears are growing quicker than they did in the same areas 15 years ago and, to the relief of researchers, are having cubs exactly when they should be — at 4 years old. It’s possible that not only is nothing wrong, but that the bears are growing so fast that even when they have cubs they have enough energy to spare to grow those wide rings in their teeth.

More research is needed. The DNR has already collared more bears in Brainerd and other parts of the range in question to follow and document how healthy they are.

“We’re thinking that it may be the case that reproduction is less of a tax on a female’s body and we might just be missing it in the teeth,” Tri said.