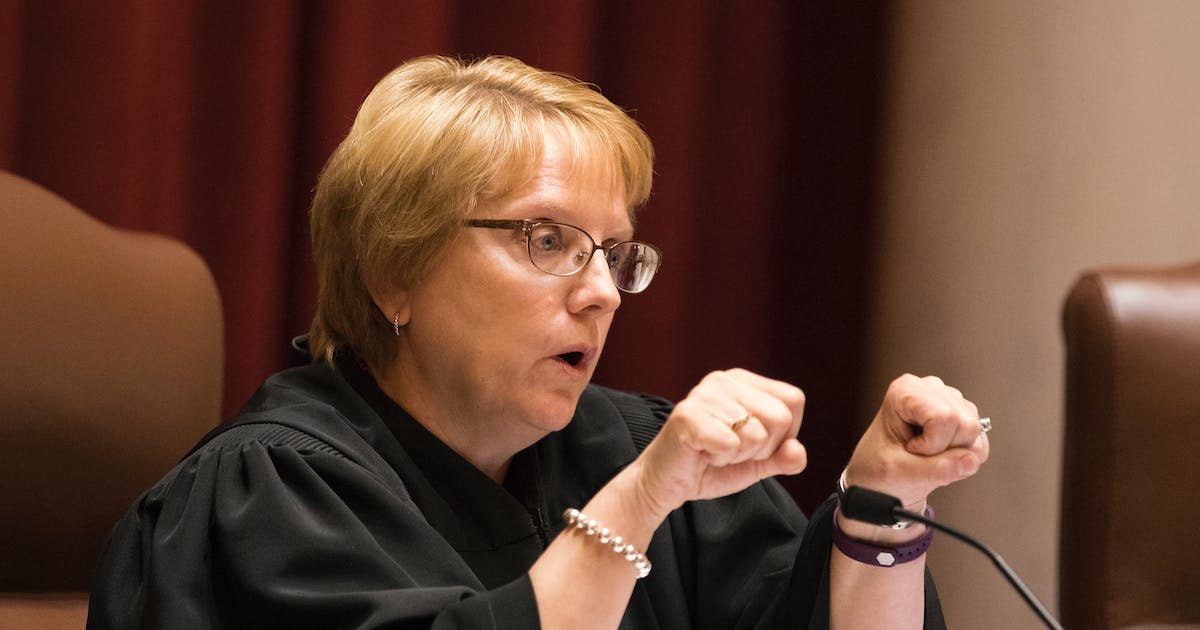 After nearly two years in which most Minnesota court proceedings were held over video conference in response to the COVID pandemic, remote hearings will become a permanent feature in many cases.

The plan was approved by the state Judicial Council, the administrative policy-making authority for the judicial branch composed of judges and court officials. It’s chaired by state Supreme Court Chief Justice Lorie Gildea, who called the new policy “one of the most important and consequential decisions made by our leadership body.” It takes effect June 6.

A major exception will be criminal court cases, where the decision to go remote will be left to the discretion of each of the state’s 10 judicial districts.

Joseph Daly, emeritus professor at Mitchell Hamline School of Law, said the pandemic had sparked a revolution in how people work.

“It’s now sparked a revolution in how the courts will function,” he said.

Gildea said the decision to make remote hearings permanent was in response to feedback from users who participated in them over the past two years.

She said one of the principal advantages of remote hearings is that individuals who must make court appearances do not need take a half day off from work, arrange for transportation, parking or child care.

Gildea said the court system is allowing jurisdictions their own control and decision-making about criminal cases because of the 31% increase in backlogged cases since the beginning of the pandemic.

“The idea is is we want to tackle this backlog, We want the local courts to figure out what is best for them,” she said. For example, one district might want to make all first appearances remote, while another might want in-person first appearances.

She said the backlog is “a very serious issue.” Today there are 46,598 active pending gross misdemeanor and felony criminal cases in Minnesota state courts, compared with 35,681 on March 19, 2020.

“Justice delayed is justice denied,” Gildea said, adding that some districts have brought back retired judges or are using referees to deal with the problem. The backlog has been reduced by about 2,700 cases in the past four months.

Gildea said discussions will take place after a year of operations under the new plan to determine what changes, if any, could or should be made.

“We will look at the lessons of what has has worked well,” she said

She added that she believed there would always be plenty of in-person hearings when taking evidence, noting its value in gauging the credibility of witnesses.

Local attorneys gave generally positive reviews of the new protocol, while others maintained some skepticism.

“It’s going to be an experiment. I think you can expect to see changes,” said Daly, who is in full support of the new protocol. He noted that remote hearings will reduce travel. For example, he said, one would no longer have to pay an attorney to travel from Grand Marais, Minn., to Duluth, then sit in court for an hour waiting to argue a motion.

“It will save time and be quite efficient and it will save a lot of money,” he said.

Twin Cities attorney Marshall Tanick called the new protocols “very prudent,” adding that they “seem to recognize how well remote procedures have been implemented over the last couple of years.”

“Lawyers and litigants have become accustomed to remote hearings, that with a few exceptions, have been efficient and effective,” Tanick said.

“The cynic in me says they want to leave [criminal cases] up to the district so they can get defendants to plead,” Brown said. If defendants are forced to go to court for multiple appearances, he said, they are more likely to plead guilty, because they cannot afford to take three days off from work for initial hearings and settlement conferences, concerned they might lose their job.

But for indigent clients, he said, “it can be very helpful. They can go to any library, hop on an iPad and have a court appearance.” He said it makes it easier for loved ones to attend a remote hearing.

Nadine Graves, deputy director of community legal services for the Legal Rights Center in Minneapolis, which represents people of color in criminal cases, said the policy has “some good parts to it” but is “not super clear.” She does not know how Hennepin County District Court will apply it.

While remote hearings can be beneficial for clients, Graves said, she worries that virtual hearings can be “so efficient it could be a conveyer belt of processing people through the system.” She said that in an in-person hearing you have to look at the defendant. “I think you see their humanity more.”

“I have been arguing for a couple of years now, in connection with high-profile cases, that we should make it easier for the press and public to monitor the workings of the judicial system, and one way to facilitate that is to let people watch proceedings remotely,” she said. “The order for non-criminal proceedings does exactly that.”

The order does not address how the public will be provided access to the video link for remote proceedings, “and it’s important that the court be very transparent about that and post the link in a conspicuous public location so the press and the public can attend these proceedings,” she said.

“I think it’s important for the court to understand that people have a right to attend these proceedings anonymously without providing their name or clicking through terms and conditions, just as they could wander into a physical courtroom and watch,” Walker said.

Gildea said the public can get access to remote hearings by calling their local courthouse. Although that can be a somewhat complicated process in some counties, Gildea said it was “a work in progress.”

“We are going to continue to get feedback on this process. Judges always have the discretion to go a different way,” she said. “One of the beauties of courtroom work is there is almost always two sides to the story.”