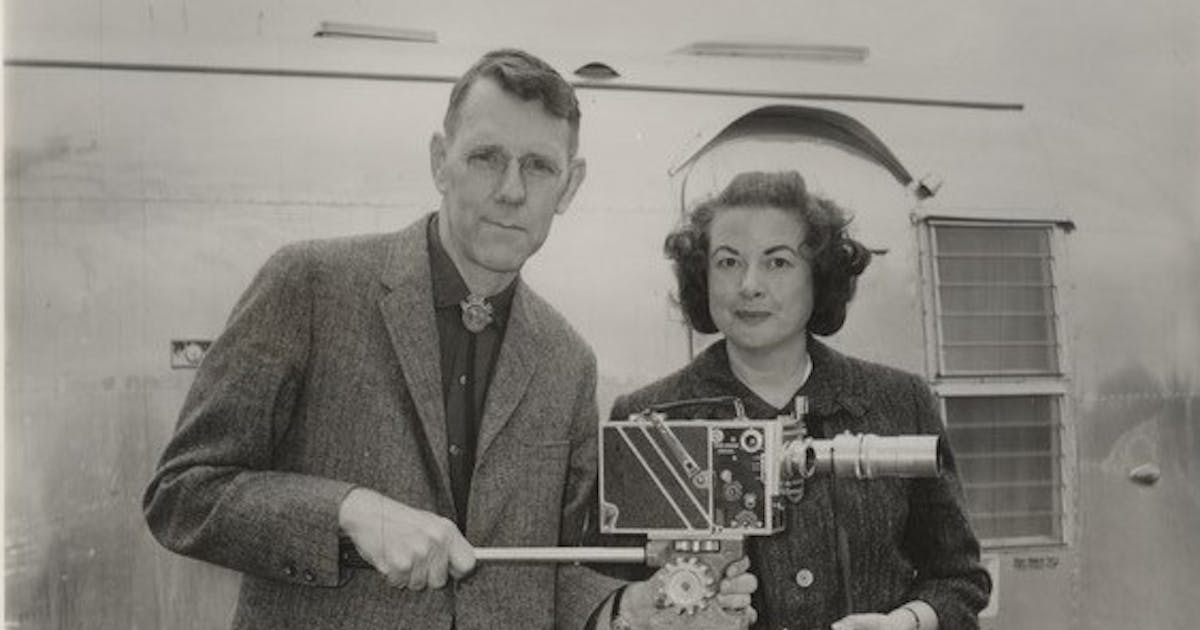 A lanky sheet metal worker’s son from Northfield, Minn., Fran Hall came of age during the Great Depression and became the globetrotting chronicler of one of the most epic road trips ever.

The Airstream travel trailer company hired Hall in 1963 to shoot photos and movies of a 14-month, 31-nation journey from Singapore to Portugal. A caravan of 50 gleaming, silver trailers were to make an overland trek of 35,000 miles.

The dizzying trip — with stops at Mount Everest, the Taj Mahal, Baghdad and Israel, the Parthenon in Athens and Moscow’s Red Square — came during tense times between the Cuban Missile Crisis and escalation of the Vietnam War. Traveling with his wife, Tallie, Hall captured it all on film — from Cambodian temples to St. Basil’s Cathedral near the Kremlin. He called it “a trip of a million lifetimes.”

“We stayed in Moscow about a week and very quickly ran out of things to see,” Hall wrote in one of his many letters home to legendary Northfield News journalist Maggie Lee. “We were followed everywhere.”

Now, nearly 60 years after the trek, the Northfield Historical Society has invited a rally of Airstreams to descend Thursday through Sunday on the southeastern Minnesota town in conjunction with a new exhibit, “Fran Hall: Tin Can Traveler.” The show of Hall’s photos and letters opened in April and will run through December 2023.

“The photos are unique for the juxtaposition of modern inventions rolling in front of archaic ruins and royal architecture,” according to the Airstream website. “The contrast was one worth documenting — nothing like this had ever been done before.”

Born in 1914, Francis William Hall was the second of nine siblings who grew up on the Cannon River in Northfield. He spent a year each at nearby St. Olaf and Carleton colleges but the Depression kept him from graduating, according to Lee.

After marrying Nathalia “Tallie” Rundhaug, a minister’s kid from South High School in Minneapolis, Hall was working at the Art Floral shop in Northfield when World War II erupted. The military rejected him because of a hernia, but that didn’t stop him from contributing to the war effort. Employed by Honeywell and trained at the University of Minnesota, Hall worked with bomb accuracy technology and instructed military officers on how to use cameras to pinpoint targets.

After the war, Hall became an acclaimed nature photographer for the National Audubon Society and Disney, specializing in closeups of insects. His infatuation with Airstreams started during a downpour while on assignment for Audubon in northern Wisconsin. While getting soaked in his tent, he noticed a nearby Airstream and decided he needed one.

He went to the Airstream factory in Ohio and struck a deal whereby he’d include footage of the trailers in his nature films in exchange for using one of them.

The intercontinental trek started in 1963 when they sailed from Los Angeles to Japan and then flew to Singapore. Officials in Burma, now Myanmar, couldn’t guarantee their safety, so the caravan split up on the way to Calcutta. Some flew while others sailed to India, “one of the strangest countries we would be in … [and] probably the most exciting,” Fran wrote.

Driving the treacherous switchbacks of the Khyber Pass while en route from Pakistan to Afghanistan was dicey for the Halls, according to research by Cathy Osterman and Travis Farrington of the Northfield Historical Society. Ignoring orders not to stop at the top of the pass, Hall got out to shoot some photos. On the way down he collided with an Afghan car and authorities seized his passport, but the American consul intervened and the Halls were allowed to proceed to Iran.

After visiting the Dead Sea and other Middle Eastern sights, they came across three bodies in Damascus, Syria, people who had been hanged by the Ba’athist regime. “It scared the hell out of me,” Hall wrote.

They meandered through Turkey and Poland, took saunas in Finland, and made their way to Hamburg and Paris before ending the trek in Portugal. After flying to Miami, they drove to Los Angeles to complete their circumnavigation, picked up the car they had left there and drove home to Northfield.

Tallie died at in 1983 at 65, but Fran was thrilled she had gone on the big trip 20 years before — a journey he called “a wonderful thing that very few people experience.”

Hall moved to Boulder, Colo., where he used the wood he collected on his travels to create inlaid bowls and photographed sunsets and wildlife. Shortly before he died in 2010, two weeks shy of turning 96, he wrote a final letter to Lee, saying: “My life has been fascinating all the way.”