Minnesota students walk out of school, rally against gun violence 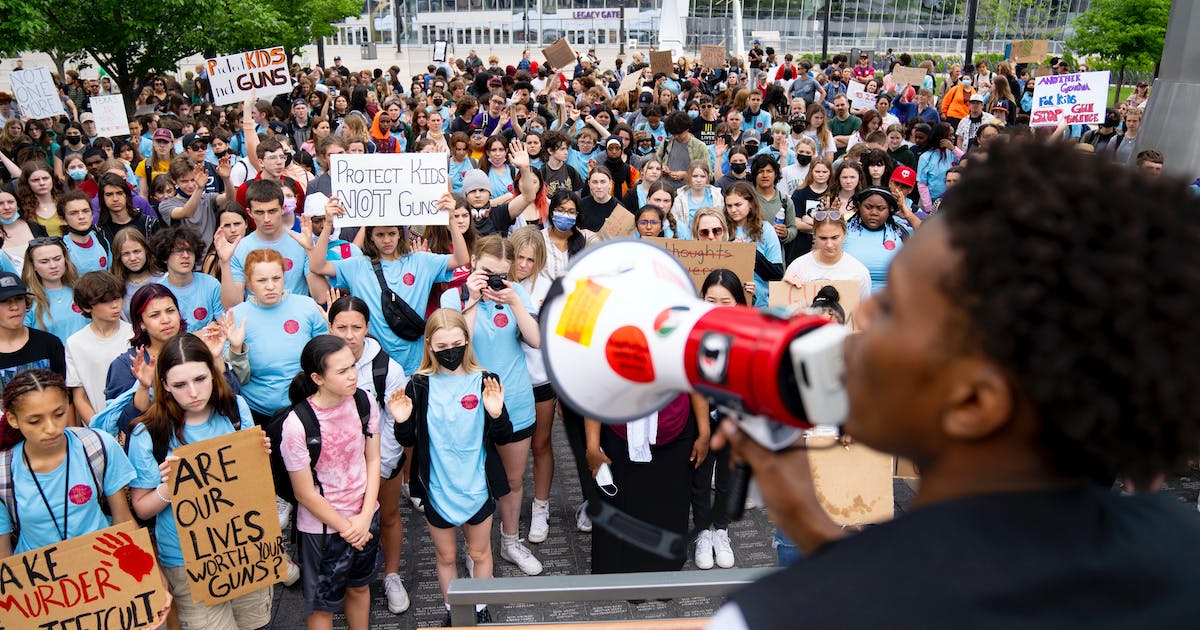 Hundreds of teens flocked to downtown Minneapolis on Tuesday demanding elected officials, from school board members to state legislators, adopt a series of measures to curb gun violence in the wake of last week’s horrific school shooting in Uvalde, Texas.

Lillie Franklin, 16, traveled from Fridley to rally at Gold Medal Park and march to U.S. Bank Stadium in hopes of conveying the sense of unease she has felt over the past week.

“If I don’t feel safe at school. Why should I want to go there?” the Fridley High sophomore said.

Fridley High junior Jean Rhodes, 17, said last week’s shooting was particularly unnerving because it came less than two weeks after a white gunman killed 10 Black people in Buffalo, N.Y., in a racist rampage. The back-to-back assaults — at a grocery store and an elementary school — made her feel less safe as she went about her everyday life.

“School is a place where our parents and other adults expect us to be for most of the day. We should feel safe there,” she said.

Students left school at 12:30 p.m. Tuesday and trickled into Gold Medal Park for the next half-hour. A group of speakers convened by teen advocacy group MN Teen Activists took turns detailing their demands of elected officials. They want a statewide advisory group composed of students and teachers from every school district in Minnesota that would convene to discuss “actionable steps to reduce gun violence in schools.”

Students across the country have similarly held school walkouts and protests since the killings in Uvalde.

The Minnesota teens on Tuesday also demanded state leaders reduce the number of active shooter drills required by state law. Currently, Minnesota schools must conduct at least five such drills every year — students say the exercises cause undue trauma and want the state to require only two.

Rally leaders emphasized the importance of student participation in both of those proposed measures.

“The youth have to have a seat at the table,” said MN Teen Activists Executive Director Jerome Treadwell.

Protest leaders are also demanding Minnesota lawmakers provide funding for mental health counseling and screening for every student in the state. They also want the Legislature to pass a law banning AR-15 rifles, the weapon used in the two most recent massacres, in Uvalde and Buffalo, plus countless others.

The teens, about 500 strong by the end of the rally, marched from the park to U.S. Bank Stadium at 1:30 p.m., gathering around the Vikings’ Legacy Ship as another group of speakers shared their stories and called for a moment of silence in honor of victims of gun violence.

Jennifer Sanchez Cortez, a senior at FAIR School for Arts in Minneapolis, said she and her friends attended the rally because they felt politicians and other adults in power have done too little to address what they see as easily preventable deaths.

“It’s a problem that needs a lot of attention right now,” she said.

School districts across the metro area notified families about the planned protests throughout the weekend. In Minneapolis and St. Paul, administrators wrote to parents to highlight their attendance policies — in both districts, students who missed class to attend the rally were marked either tardy or absent.