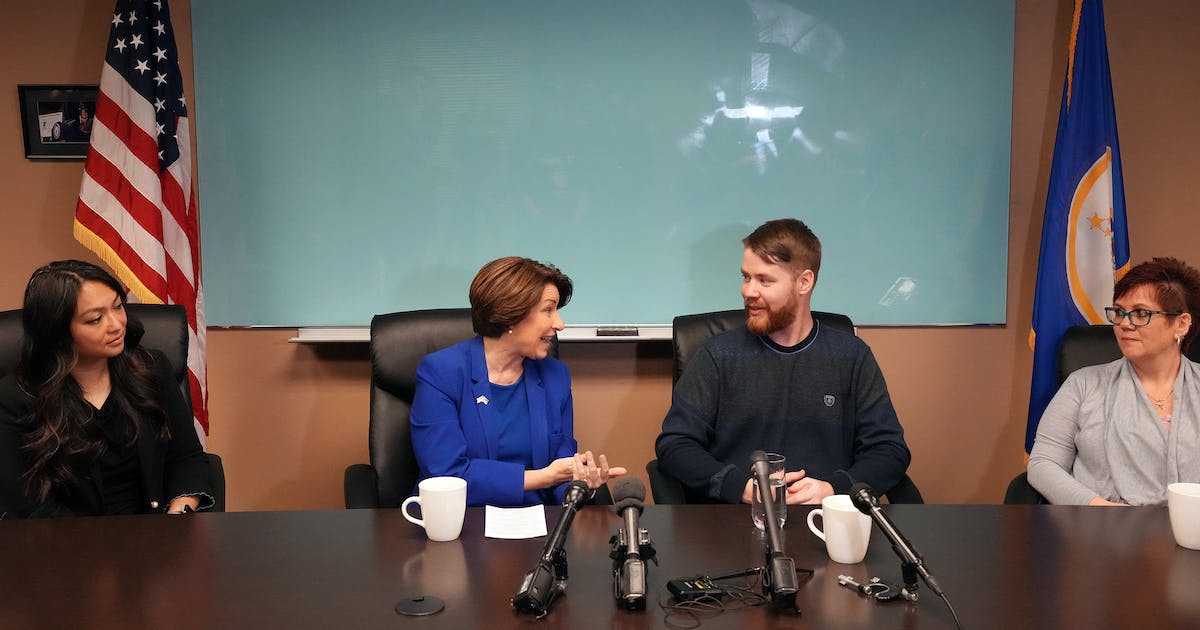 Tina Hauser opened the door to her Winona home and let out a shriek. Standing on the steps was her son, Tyler Jacob, back from war-torn Ukraine and a Russian jail where he was held on suspicion of being a spy.

“To have him home is the greatest joy a mother could ask for,” Hauser said Tuesday, breaking into sobs at a news conference where U.S. Sen. Amy Klobuchar detailed some of the steps taken to secure Jacob’s release.

The 28-year-old Jacob, an English teacher in the Ukrainian city of Kherson, was detained March 12 as he fled the country in the weeks after Russian forces invaded.

Jacob was on a bus headed for Turkey when it was stopped at a checkpoint and all passengers were questioned. After several sessions of questioning, Jacob was taken by soldiers to the Crimean city of Simferopol, where he was quickly tried and convicted of refusing to show his passport — a charge he said was false.

He was tossed into a Russian jail, where he shared a cell with two Russian prisoners. Authorities confiscated his phone, laptop and tablet, Jacob said, and copied the hard drives. They printed copies of his photos and questioned him for several hours each day.

Jacob added that he was treated well. The food, which often included meat pasties, was good, he said, and one day a Russian official even took him to a local restaurant, where he bought Jacob a chicken sandwich and a latte.

Eventually, he said, the Russians became convinced that Jacob was indeed a teacher, not a spy. After 10 days, he was allowed to buy a train ticket to Moscow. From there, he caught a flight to Istanbul and then to the United States, arriving home in Winona on March 29.

Klobuchar’s office worked behind the scenes with embassies and State Department officials to get Jacob released.

“This is a joyful day for me, as I finally get to meet Tyler and Tina, his incredible mom who made sure we found Tyler,” Klobuchar said at the news conference. The Minnesota Democrat added that officials had to walk a line, moving assertively on Jacob’s behalf while not drawing too much attention to him.

“We didn’t want them focusing so much on your case that it became a cause célèbre and they wouldn’t give him up,” she said, praising Hauser and Jacob’s father, John Quinn, for not inflaming the situation.

“Clara never gave up,” she said. Jacob said Klobuchar and her staff were the reason he was freed so quickly.

“I definitely believe I wouldn’t be here without you vouching for me,” he said. “They thought I was a spy.”

Jacob moved to Ukraine in November, taking the teaching job so he could be close to his longtime girlfriend, a Ukrainian he married in January. U.S. officials are working to get her the needed visa to come to America. Her name is being withheld to protect her safety.

Klobuchar briefly discussed the military situation in Ukraine, saying, “The latest atrocities we have seen are unbelievable.”

Russian military forces are now concentrating their strength in the eastern region of Donbas, a move she called “disturbing.” The United States needs to continue providing military aid to Ukraine, she said, including drones along with Stinger missiles and Javelin anti-tank weapons.

“When you’re fighting someone like Vladimir Putin, you can’t stand down,” she said. “You have to stand up and move forward.”